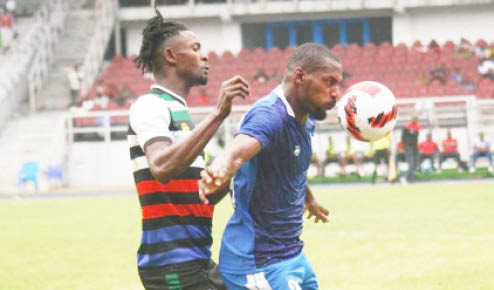 Defending champions, Rivers United were unable to get past Sunshine Stars as both sides settled for a 1-1 draw at the Akure Township Stadium, giving the hosts their first point of the season.

Rivers United took the lead in the 24th minute and were poised to keep its perfect start to the new campaign until Ejike Uzoenyi, a former member of the Super Eagles, scored Sunshine’s equalizer late in the 86th minute.

After defeating Gombe United 1-0, Remo Stars in Group A improved to 2-0 on the year. A winner by Andy Okpe in stoppage time at the Pantami Stadium decided a very close game.

As a result, Bendel Insurance and Remo Stars are now tied for first place in Group A.

At the Samuel Ogbemudia Stadium in Benin, Bendel Insurance scored the game-winning goal in stoppage time to keep their perfect record in Group A intact.

After a goalless first half, Ismail Sarki gave Insurance the lead in the 66th minute.

However, Plateau United equalized in the 90th minute through Mustapha Abdulahi and looked like it had snatched a valuable point until Imade Osehenkhoe stunned them with the winner in the 93rd minute.