Phone snatching has once again become a serious security challenge in Kano despite measures by security agencies and the general public to curtail the menace.… 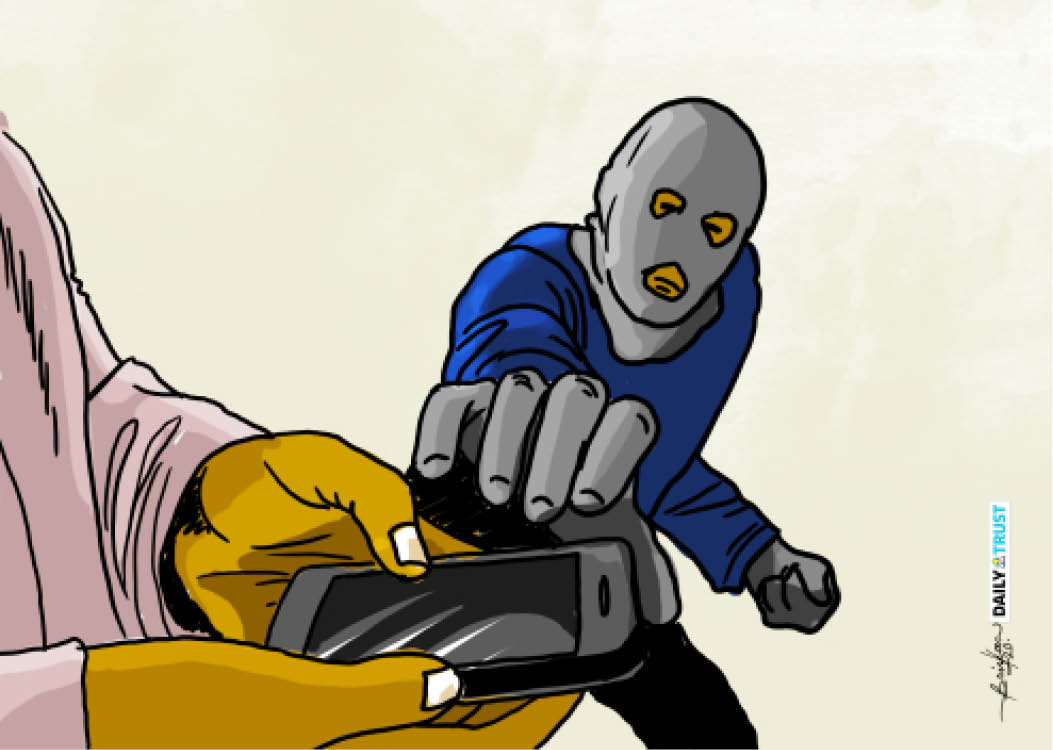 Phone snatching has once again become a serious security challenge in Kano despite measures by security agencies and the general public to curtail the menace.

Almost all parts of the metropolis are encountering the problem, as the phone snatchers continue to surface in all nooks and crannies within the city.

The situation has so degenerated that the snatchers now operate in the daytime and invade houses in various communities, a departure from their modus operandi of snatching phones on the main roads and in the night.

Most of the criminals, said to operate under the influence of drugs, inflict injuries  on their victims, a situation that has led to a couple of deaths, residents said.

It was gathered that the phone snatchers now use a new way of attacking people, which is to block main roads, flyovers and underpass in large numbers and launch their attacks without fear.

Dahiru Shitu, a resident of Gwammaja Yankosai said he and others were attacked recently by a number of thugs who blocked the main Gwammaja road and snatched phones.

“I was inside my car around 6:30pm when I saw a group of thugs approaching. Immediately they arrived at the junction in Gwammaja, they started snatching phones in tricycles and stabbing people. People begun to run and later they started raiding cars. I was very lucky to stay close to a corner from where I escaped,” he narrated.

Shuaibu Muhammad Kurna said he was attacked by phone snatchers in the afternoon while in a commercial tricycle along Katsina road at the Kofar Ruwa Underpass.

“Now, any tricycle rider that insists he must follow through the underpass must drop me before going in,” Shuaibu said.

Fatima Idris said the experience was even worse for women since they (criminals) usually snatched their bags containing a lot of valuables.

“Three of us were in a tricycle at the popular Dan Agundi junction. A group of thugs invaded the place attacking people. I just saw them close to my side. They collected our bags including money, phones and many other belongings. Honestly, I can’t forgive them,” she said.

Comrade Balarabe Yusuf Gajina, Chairman of Voice of The Masses Awareness Initiative (Muryar Talaka) said recently some thugs broke his car glasses and carted away his belongings worth over N200,000 around Kwari market.

Kamalu Ahmad, who just recovered from an injury inflicted on him by the phone snatchers, said his phone was snatched by a teenage boy.

“I was sitting next to the boy in the keke (tricycle) when he asked me to give him my phone. I was shocked by his confidence because I’m four times bigger than him. But to my surprise he brought out a sharp knife and stabbed me on my leg and hand,” he said.

Comrade Rabi’u Shamma and Magaji Galadima, as well as many other activists and social media users have taken to their various accounts to condemn the attacks by phone snatchers in the state, demanding that it should be proactively addressed before it got out of control.

Musa Muhammad Dona said: “The Kano State Police Command is really trying but the issue of phone snatching is growing; the theives are becoming bolder and deadlier by the day.

In its reaction, the Kano State Police Command told Kano/Jigawa Chronicle that it had successfully tackled the phone snatching menace with the arrest of over 150 thugs with several weapons and hard drugs in the past two weeks.

The command’s spokesman, DSP Abdullahi H. Kiyawa, added that since the last major operation of the command just before Democracy Day celebration, no single report of phone snatching has been received. He said all suspects arrested have been charged to court.

He added that the Commissioner of Police, Sama’ila S. Dikko, recently met with the leadership of blacksmiths in the state and they promised to prevail on their members on the production of the weapons always found on the criminals.