Nigeria stands to be stripped of the women’s 4x100m relay gold at the 2022 Commonwealth Games in Birmingham, after an unnamed member of the quartet… 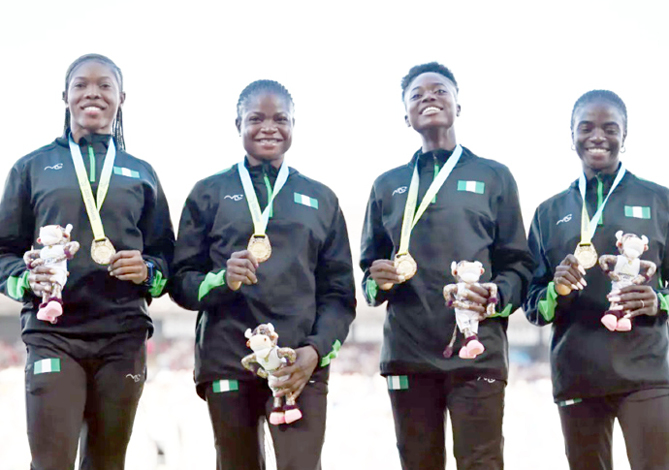 Nigeria stands to be stripped of the women’s 4x100m relay gold at the 2022 Commonwealth Games in Birmingham, after an unnamed member of the quartet failed a doping test.

It was learnt that the Athletics Federation of Nigeria had been notified of the development by the World Anti-Doping Agency, as the confirmation of the B sample is still being awaited.

The gold medal won in the 4x100m Women’s event is now under threat after the failed dope test of one of the athletes in the winning quartet of Tobi Amusan, Favour Ofili, Rose Chukwuma and Grace Nwokocha.

The quartet had set a new African Record of 42.10s to win what was Nigeria’s 11th gold medal in Birmingham and it was a historic moment for the country at the Games.

However, with the latest developments, the fanfare and excitement that came with that gold medal and the African record will amount to nothing owing to the doping rules.

The doping rule nullifies any performance in its entirety, even if just a member of the team is guilty of the doping infraction.

Though the Athletics Federation of Nigeria, AFN is yet to make a public statement on the identity of the erring athlete but it has been confirmed that Nwokocha‘s A sample tested positive for anabolic steroids, but weren’t forthcoming on the precise steroid.

The 21-year-old Nwokocha, a multiple time national champion over 100 metres, has a personal best time in the 100m of 10.97 seconds set at the last World Championships in Eugene, Oregon, USA. She also ran a personal best of 22.44s in the 200m.

It is the first time in her blossoming athletics career that Nwokocha would be linked to any drug-related controversy.

The Athletics Integrity Unit, the agency in charge of international doping cases, has also yet to issue a public remark on the topic because the outcome of the ‘B’ sample, which is often the same as the ‘A’ sample, is still awaited.

In any case, the AIU had applauded Nigeria for its increased anti-doping efforts in the lead-up to the Commonwealth Games.

If Nigeria loses the relay medal, Birmingham’s performance won’t be remembered as the nation’s best-ever performance at the Commonwealth Games.