In 2021, the Kaduna State Government trained over 1,000 members of the state’s Vigilance Service to assist in the fight against bandits terrorising rural areas… 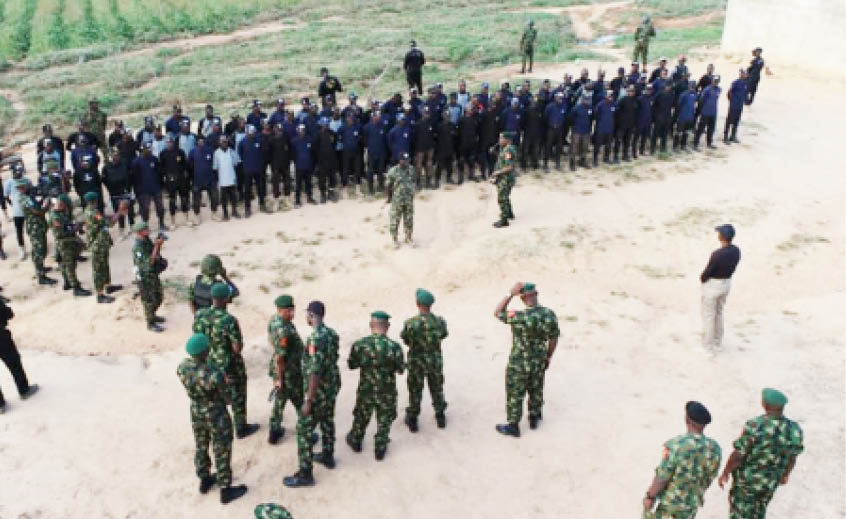 In 2021, the Kaduna State Government trained over 1,000 members of the state’s Vigilance Service to assist in the fight against bandits terrorising rural areas in the state. However, eight months after a military operation that claimed the lives of some of their colleagues, some members of the service said they were suspended for demanding allowances and death benefits of those who fell in action. In this report, Daily Trust on Sunday looks at the tension brewing between the state government and some members of the vigilante group.

There is growing apprehension among some members of the Kaduna State Vigilance Service few weeks after they returned from eight months of military operation across major flashpoints in the state. For eight months, members of the state’s vigilante told Daily Trust on Sunday that they fought alongside men of the Nigerian military in Birnin Gwari, Igabi and parts of Giwa local government areas.

Those from Igabi Local Government Area who have returned home told our correspondent that they lost three men during the operation. They were, however, surprised when the Kaduna State Government failed to pay death benefits of the fallen heroes, while those who survived were not even commended, even with a handshake.

“We were not given any financial allowance, and when we protested, we got suspended,” one of the vigilante personnel told Daily Trust on Sunday.

Our correspondent gathered that the personnel were among the over 1,000 members of the Kaduna State Vigilance Service who were selected and trained for two weeks at the Police College in Kaduna in late 2021. From the 1,000, about 200 personnel from Igabi Local Government Area had been deployed to Kachia Local Government for operation and later to Sabon Birni in Igabi.

The personnel said they were fed during the operation, but on their return, they had expected some allowances from the state government, which did not come.

Giving details of their operation, a member of the state’s Vigilance Service, Ahmed Tijjani, said they succeeded in clearing several bandit camps, adding, “I was among those whose vehicle was hit by a landmine, but thank God that we are alive. But there has been no appreciation for us.”

Leading a group of selected vigilante members from Rigasa in Igabi Local Government Area to press for their demand is Jameel Abdulrahman, who said he and 9 others had been suspended for demanding allowance from the state government, as well as some form of death benefits for their fallen colleagues.

Abdulrahman gave the names of the deceased as Musa Sanusi, a resident of Mashi Road in Rigasa; Muktar Usman from Ladi Wadil Rigasa and Ridwan Sani of Dattawa Rigasa. He said that instead of appreciating their efforts and paying the death benefits of their friends, the state government suspended them. 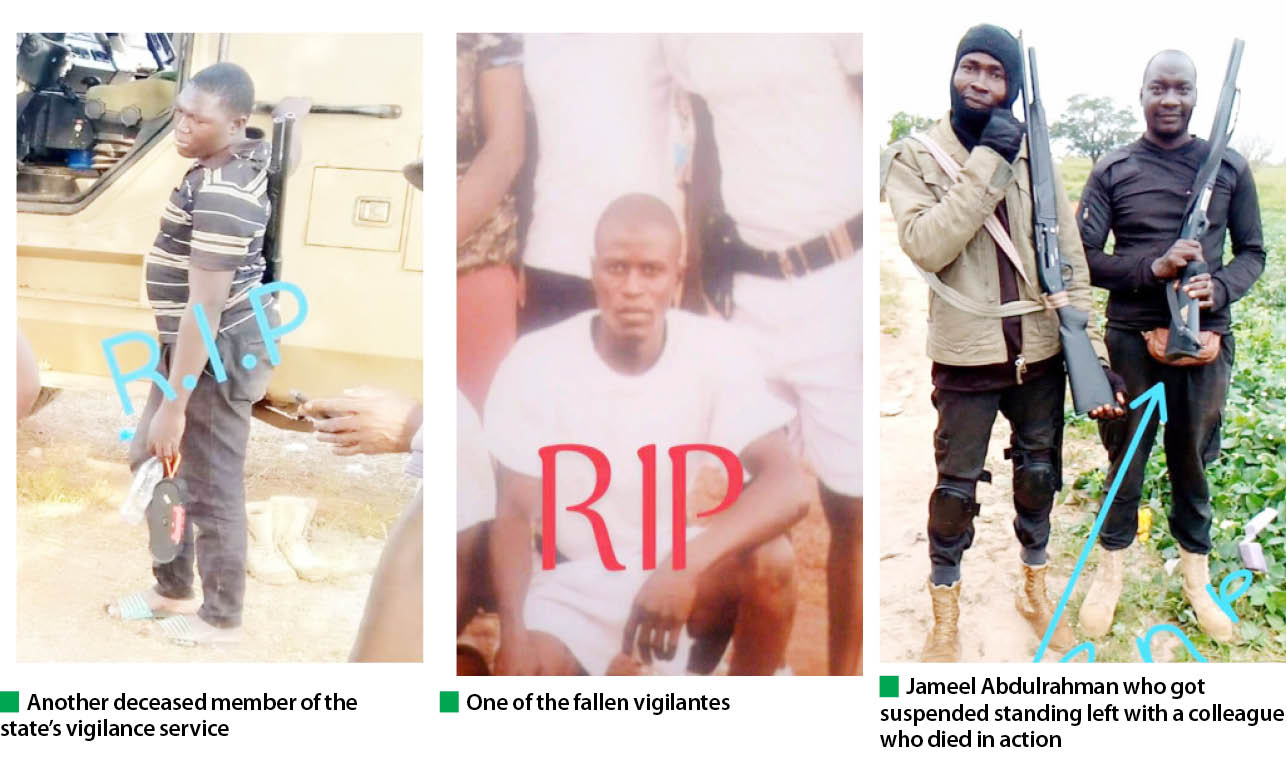 “There have not been death benefits for those who lost their lives, and those of us that returned have not received even a commendation letter from the Kaduna State Vigilance Service or the state government to show appreciation and as proof that we served our fatherland and sacrificed our lives,” Abdulrahman said.

It was alleged that instead of appreciation, in a letter dated October 31, 2022 signed by Datti A. Haruna, the Rigasa ward supervisor of the Kaduna State Vigilance Service, Jameel Abdulrahman and 9 others were suspended for “gross misconduct and forming a parallel authority, organising meetings and publications that caused disintegration of the service and personnel in Rigasa.”

According to the letter, the affected vigilantes were also suspended for their refusal to appear before an investigation committee set up by the local government and ward level to look into their issue.

The Kaduna State Commissioner for Internal Security and Home Affairs, Samuel Aruwan, could not be reached for comment as his phone was switched off and a text message sent to him was not replied.

However, the special adviser to Governor Nasir el-Rufai on Internal Security and commander of the Kaduna State Vigilance Service, Brigadier-General Umar Ibrahim (retd), said he was unaware of their suspension.

He said the vigilantes were mobilised as volunteers to assist their communities and the state against bandits, adding that many of them had been conscripted from their community vigilante groups when the state government came up with the idea of the vigilance service.

The suspended members, however, confirmed that they had been fed throughout the operation and had been asked to open bank accounts before embarking on the military operations.

Abdulrahman, however, said, “N10,000 was paid to us after the training at the police college. An additional N5,000 was later paid to us before we moved to Kachia for another training. But since then, no money has been paid to us.”

But the commander insisted, “As volunteers, I don’t think the state has any other obligation to them since they agreed to come and assist their communities and the state.”

He said that after their training at the police college, the vigilantes were attached to the 1 Division of the Nigerian Army and feeding allowances made available to him, which he disbursed through their commanders.

The commander also said that members of the Vigilance Service were sent to into four areas of operation—the Kaduna-Abuja road, Igabi, Giwa and Birnin Gwari local government areas. He, however, said that following a decline in security challenges in the area, those from Igabi had been withdrawn from operation and asked to return home.

“It is only few of the vigilantes from Rigasa in Igabi that have registered complaints of allowances. Those from Birnin Gwari who are still in operation and others from Giwa and Kajuru have not made any complaint about benefits. It is not documented in any paper that they are entitled to this or that. We were to feed them and they were fed,” he stressed.

On the death benefits of those who lost their lives, the commander said there was equally no written agreement to pay death benefits, but added that the Vigilance Service had expressed condolences to their families and distributed some stipends.

But Malam Usman Abdullahi, a resident of Rigasa, whose son, Mukhtar was killed at the early stage of the operation, said the officials of the Vigilance Service had visited the family for a condolence and donated some foodstuff. He, however, said no one had contacted them since then.

“We actually thought that those killed would be entitled to some benefits since they were trained by the government. We expected that something would be given to their families, but since we are poor and cannot fight the government, we have left everything to God. It is left to them if they decide to contact us,” he said.

A security expert in Kaduna State, DSP Ibrahim Garba (retd), said the suspension of the vigilantes came with serious negative implications, adding that such a hasty decision to suspend men who fought to keep the peace in the state is part of Nigeria’s major problem.

“This is one of the things our leaders don’t take very seriously. The consequences are what we are witnessing today as a result of insecurity and everybody is crying. Again, we don’t train people and sack them without any proper compensation or giving them some kind of responsibility to keep them engaged,” he said.

Reacting on the lack of agreement with the vigilantes on allowances, he said it is immaterial whether there is a documented agreement or not.

“When you invite somebody to work for you, especially these young men, most of them are ordinarily supposed to be offered jobs by the government, but for lack of employment the government co-opted them into the security architecture, at the end of the day, whether they ask or not, some form of allowance should be created for them.

“You can’t just ask somebody to work for you without offering him something to take care of himself. If the government claims they are volunteers, then ordinarily, the government should not have been part of this. But since the government has come into it and even trained them, they would have some hope that government would offer them some allowances at the end of the day,” he said.

He urged the state government and the Vigilante Service to reverse their decision, stressing that the police and other security agencies are facing manpower shortage, and would, therefore, need the support of vigilantes across communities.