Senator Mohammed Danjuma Goje (APC, Gombe Central) has vowed to take legal action against the Peoples Democratic Party (PDP) over the inclusion of his name… 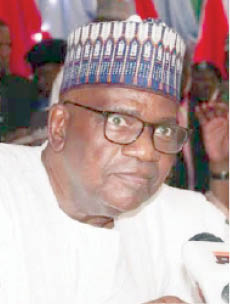 Senator Mohammed Danjuma Goje (APC, Gombe Central) has vowed to take legal action against the Peoples Democratic Party (PDP) over the inclusion of his name among the participants in the opposition party’s senatorial primaries in Gombe State.

Goje’s name and picture appeared on the PDP ballot paper alongside other persons who are said to have also participated in the primaries held on Monday in Gombe.

The lawmaker, in a letter to the PDP chairman, Iyorchia Ayu, through his counsel, Paul Erokoro (SAN), reiterated that he remains a registered, card-carrying member of the APC, on which platform he was elected senator twice.

He said including his name among the PDP senatorial aspirants was a deliberate act by mischief-makers that are out to tarnish his image and reputation.

Goje, therefore, vowed to take legal action against those responsible for the embarrassment.

The letter reads: “As you are aware, our client has been a long-standing member of the APC and has twice been elected as a senator of the Federal Republic of Nigeria on the platform of the APC.

“Our client has not left the All Progressives Congress and has not joined the Peoples Democratic Party or any other political party.

“Our client believes that the public misrepresentation of facts was the deliberate action of mischief-makers, who wanted to embarrass our client and tarnish his image and reputation for whatever reasons.

“Our client has therefore instructed us to take all legal means to identify those responsible for the attempted embarrassment and take all necessary legal steps to protect our client’s name and reputation.”