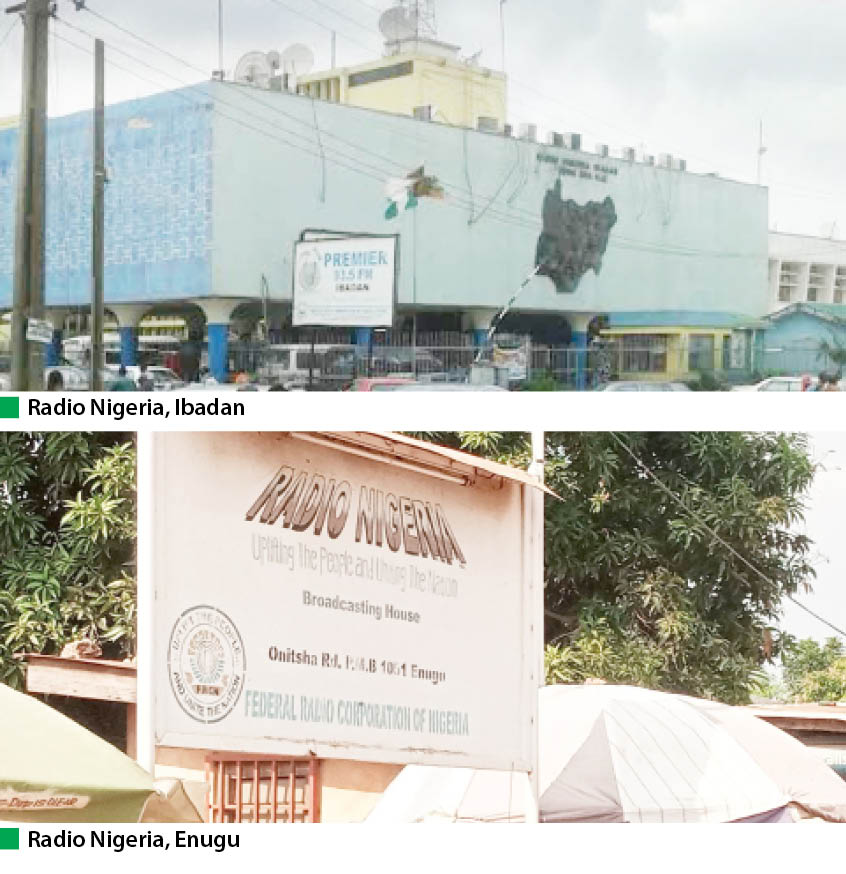 The past glory of the Federal Radio Corporation of Nigeria (FRCN) has become history as the legendary entity which did not only bestride quality standard but also waxed strong like a colossus in the broadcast media firmament during its glorious days,  has taken a nosedive, having succumbed to the ills of poor management,  neglect, obsolete equipment and poor working conditions. Many of the stations in different parts of the country are teetering on the edge of collapse, while some of them are gasping for survival. Daily on Trust puts some of the outfits in some states on the spotlight.

But for the regular salaries that they enjoy, the morale of the staff at the Ibadan, Oyo State, Federal Radio Corporation  (FRCN)  regional station would have gone down completely and resulted in some measures of productivity decline. This is against the backdrop of lack of relevant tools, especially equipment, basic transport allowance for assignments. “Equipment are obsolete. We source for supports from people to fix our equipment whenever they are down. They have stopped our transportation fare to assignments. We are still using ‘old-school’ equipment. But we thank God our salaries are being paid promptly. Despite the odds, we keep the flag flying.” These are some of the lamentations of some staff of Federal Radio Corporation (FRCN), Ibadan centre located at Oxford House, Oba-Adebimpe Street, Dugbe, in the heart of Ibadan.

Recall that Radio Nigeria, Ibadan, which came on the stream on April 1, 1955 has lost its glory not only due to lack of equipment and poor management and funding but also because the past alluring environment of the broadcast giant has been turned to a business arena where people go about their various businesses.

A staffer of  the station who craved for anonymity, said the system had collapsed.

“We are in a terrible situation now. The radio Nigeria, Ibadan network centre is not in safe hands. All our equipment are not working well. Even during the military era, it wasn’t this bad. I urge the federal government to come to our rescue,” he said.

A former Deputy Director, News and Current Affairs, Pastor Kayode Akinsola, told Daily Trust that commercialization of Radio Nigeria had affected its content and defeated the main purpose of its creation.

“Radio Nigeria remains radio Nigeria, but the difference is that our leaders are not futuristic. FRCN is supposed to remain a public outfit to be able to help members of the public understand the activities of government and vice versa as a feedback mechanism,” he said.

“For them to now throw NTA and FRCN into the water of commercial broadcasting which has deprived them of their original roles is pathetic.  It has weakened NTA and Radio Nigeria. FRCN is supposed to serve as the eyes of the government and even a feedback for government,” he added.

“The Coal City FM 92.9, Enugu, is an arm of the Federal Radio Corporation of Nigeria (FRCN), Enugu Zonal Headquarters. But the outfit, Daily Trust gathered, is on the verge of collapse.

Some workers who spoke to our correspondent on the condition of anonymity, said that it struggles to remain on air intermittently in order to maintain its status as the Zonal Station as it can’t be allowed to collapse completely.

According to them, the critical crises bedeviling the station include obsolete transmitter and other equipment,  government interference in terms of poor subvention, appointment of incompetent directors, corruption, lack of accountability, unpaid staff allowances, politicians’ influence in recruitment of their unqualified cronies, indiscipline, poor quality news content, lack of commitment to duty, among other challenges.

“The Coal City FM station has suffered so many setbacks. Recently, the only old transmitter was off air for about a month. The reason being that the obsolete transmitter broke down because it was kept in a place where the required temperature could not be sustained. The transmitter is not digital. It needs to be replaced,” a male worker said.

“There was also the issue of vandalization of transmitters, especially medium wave channel that was vandalized for over three years ago. That incident has rendered the channel moribund,” a female staffer said.

“What drives a station is the quality of its news or programme contents.

We are highly populated here that no news should happen without our knowledge. Things that ought to be of public interest are paid for and it’s affecting the content. That’s why the news content, at times, seems watery,” another staffer said.

Daily Trust gathered that apart from the Enugu Zonal Station, all other Radio Nigeria stations in the Southeast are struggling to survive.

“They manage to be on air for about six hours on the average. For instance, the Abakaliki Station, Unity FM, only comes on air during the 7am news and go off as soon as the news is over. Then they come back on air in the evening and later go off. The station has lost some of its clientele.”

While giving more graphic details of the state of the stations, another male broadcaster said: “In Imo State, Heartland FM has been battling to broadcast for about two years now. The situation is even getting worse now. Pacesetter FM in Umuahia, Abia State, has been bad for a very long time. In fact, apart from the Coal City FM in Enugu, it has not been easy for other station to broadcast.”

“In Awka, the Purity FM was affected badly because of its location in a place where the road is not accessible. It was just recently that their transmitter was installed. The transmission is very poor. Even, the reach of most of these stations is so poor,” he added.

“Basically, lack of quality equipment is the main challenge as well as government interference. There’s no proper funding from the government. It’s a major issue.

The Federal Radio Corporation of Nigeria Kaduna, formerly known as Radio Kaduna was founded in 1962 by the  late Sir Ahmadu Bello Sardauna of Sokoto and first Premier of  the Northern Region. But the once northern voice with the largest radio listenership in the sub-Saharan Africa is battling for survival due to negligence.

The station broadcasts in Hausa, English, Nupe and Kanuri languages; while the Hausa programme is broadcast in Kaduna State and worldwide on 6090 kHz shortwave, the English programme is heard on 4770 kHz. The station played a role during the civil war of 1967 to win support for the government troops as well as promote unity and stability of the country.

The station was the only respected radio station across the Hausa-speaking states and neighbouring countries like Niger, part of chad and Cameroon among others. Now the station has FM channels in Kaduna city – the Supreme FM on 96.1 MHz and Karama FM on 92.1 MHz.

But the broadcast giant has lost its past glory in the wake of myriads of  challenges that border on  production, obsolete equipment, overstaffing, poor staff welfare, poor working environment among others.

Daily Trust’s findings revealed that the building occupying the station  had never been renovated since 1962 when it was established. Most times, it’s only repainted.

Currently, the station has the oldest transmitter in the country because no radio station  uses the  same transmitter which  was installed in May, 1981, with a life span of 10-15 years. But it is still in use 40 years after. Sources from the station said the manufacturers of the transmitter had since stopped manufacturing the particular brand  for years.

“The spare parts for the transmitter are difficult to get. This is why any time it stops working, we have to be off the air for hours or days.

As a result of these challenges, we can’t reach our large listeners. This has  affected our revenue generation,” a senior staffer who doesn’t want to be mentioned told Daily Trust.

“The problems facing the station are also affecting our morale.

Most of us own laptops and android phones which we use  to work,” a staffer said on the condition of anonymity. The station is always off air, making our listeners to tune to other private stations,” a worker who preferred anonymity said.

He also lamented that despite the fact that the FRCN staff are under the Federal Ministry of Information alongside National Television Authority NTA staff  are better off.

“We don’t get anything. We hardly get even transfer allowance.

Daily Trust on Sunday’s findings also revealed that there is no internet connectivity  in most of the units or departments. Staff use their personal data to work.

“As producers, we are left behind in the current affairs due to lack of internet because it boosts our morale to work but the absence is affecting our work seriously,” he said.

It was gathered that the editorial staff contribute money to buy office data, if not, they would end up using their personal data on their laptops or phones to source for news items work.

FRCN Kaduna needs total overhaul as we only lived in past glory – Workers union The Chairman of workers union under Radio Television and Association Union (RATAWU), the FRCN Chapter, Umar Yahaya, said the station needed total overhauling to regain its past glory.

He said the union had been making case with the management for staff welfare, but management could not do anything without orders from the national Headquarters.

“The station needs a total overhauling. Some of the equipment have been there for modern 40 years have been refurbished and refurbished. In fact, we need new equipment for the station to work properly,” he said.

We are aware of the challenges – Management

The Zonal Director, Buhari Auwalu, who admitted that there were challenges facing the organization, said  that the attention of the National Headquarters had been drawn to them with a promise that government had started working towards addressing them.