The governments of Akwa Ibom, Edo, Bayelsa and Delta states have refused to disclose the specific projects they executed with parts of the 13% derivation… 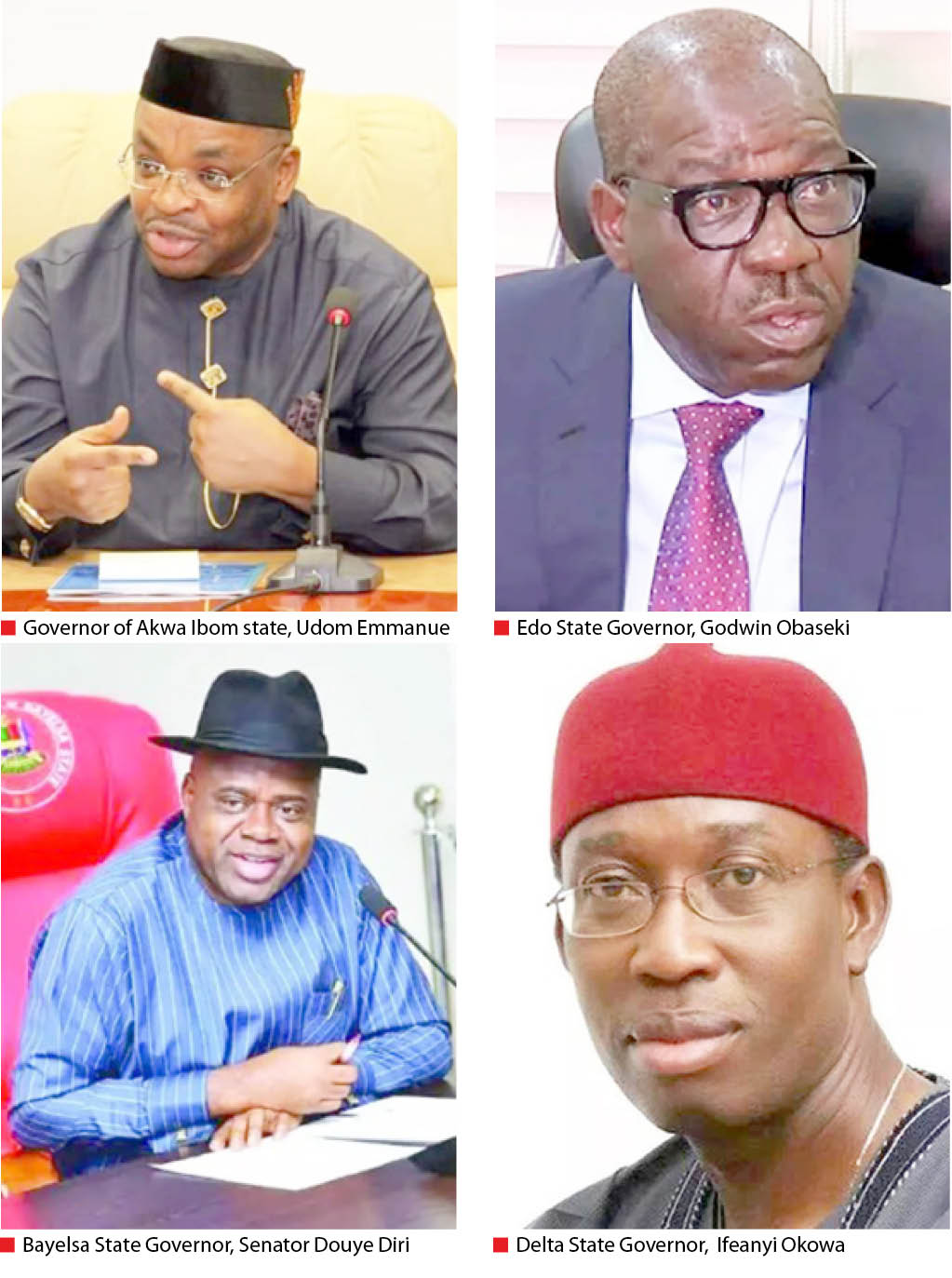 The governments of Akwa Ibom, Edo, Bayelsa and Delta states have refused to disclose the specific projects they executed with parts of the 13% derivation arrears paid to them by the federal government, Daily Trust Saturday reports.

This is as the Presidency on Friday said nine oil-producing states received a total of N625.43 billion 13 percent oil derivation, subsidy and SURE-P refunds from the Federation Account in the last two years, 2021-2022.

Most of the oil rich state governors have been under scrutiny following a revelation by their counterpart in Rivers, Nyesom Wike, who said that President Muhammadu Buhari approved and paid the arrears to them, saying he used the amount accrued to his state for the projects being inaugurated by prominent personalities.

The Senior Special Assistant to the President on Media and Publicity, Malam Garba Shehu, in a statement yesterday said the outstanding amount to be released to the nine states stood at N1.1 trillion.

Wike, who hailed Buhari for approving payment of funds owed Niger Delta states since 1999, said the money has been the major source of infrastructural development under his administration.

Since the day he made the statement, his colleagues in oil producing states and the federal government have been under pressure to come up with full disclosure of all the monies released and how they were used.

The federal government released its side of the story yesterday while despite several efforts to get the details of what they did with their share of the monies, some of the affected states kept mum while others mentioned some projects.

What we gave them – Presidency

Garba Shehu in the statement yesterday said data obtained from the Federation Account Department, Office of the Accountant General of the Federation showed that a total of N477.2 billion was released to the nine states as refund of the 13 percent derivation fund on withdrawal from Excess Crude Account (ECA) without deducting derivation from 2004 to 2019, leaving an outstanding balance of N287.04 billion.

He said the states also got N64.8 billion as refund of the 13 per cent derivation fund on deductions made by NNPC without payment of derivation to Oil Producing States from 1999 to December.

Shehu said the benefitting states still have an outstanding balance of N860.59 billion windfall from the refunds, which was approved by President Buhari.

“The States were paid in eight instalments between October 2, 2021 and January 11, 2022, while the ninth to twelfth instalments are still outstanding.

“On the 13 per cent derivation fund on deductions made by NNPC without payment of derivation, the nine oil producing States were paid in three instalments this year, with the remaining 17 instalments outstanding.

“Meanwhile, the benefitting states shared N9.2billion in three instalments in April, August and November 2022 as refunds on the 13 per cent derivation exchange rate differential on withdrawal from the ECA.

“Similarly, all the nine states received N4.7 billion each, totalling N42.34 billion as refunds on withdrawals for subsidy and SURE-P from 2009 to 2015. The refund, which is for all the states and local government councils, was paid on 10th November, 2022.

“The Federation Account also paid N3.52billion each as refund to local government councils on withdrawals for subsidy and SURE-P from 2009 to 2015 on the same date in November,” he said.

The presidential spokesman said President Buhari considered it a matter of honour and decency that debts owed to states or anyone for that matter should be repaid and in time without regards to their partisan political affiliations.

When contacted before the latest released by the Presidency, the Edo State Governor Godwin Obaseki said the state has so far received the sum of N2.1 billion out of its N28 billion share of the 13% derivation arrears.

The governor, speaking through the Commissioner for Finance and Budget, Joseph Eboigbe, said the state received N700 million in three tranches.

“The net amount will come to each state over five years. Each year, you will have a quarterly remittance. Our share was N28 billion and will be distributed over five years.

“There will be 20 quarterly instalment releases. Three have come so far and each has been N700m. It is less than our monthly internally generated revenue, which is N3bn monthly,” he said.

The commissioner said the state spent an average of N3bn monthly on capital projects. “N700m is a small amount relative to what we spend. On a monthly basis, Obaseki normally disburses almost N3bn on capital expenditures. That amount goes across all ongoing projects,” he said.

The Commissioner for Information and Orientation, Chris Nehikhare, on his part, said the state government has judiciously spent the fund for the people of the state.

We used it to execute state projects – Delta

In Delta, the Commissioner for Finance, Chief Fidelis Tilije, at a press conference in Asaba, said the state has not fully accessed its funds.

He claimed that unlike Rivers State which got commercial banks to discount its fund, Delta State governor Ifeanyi Okowa only applied for N100bn.

“With the agreed amounts settled, some states like Rivers approached commercial banks and discounted theirs in full and collected, but Senator (Dr) Ifeanyi Okowa said he would not want to leave the next administration with a huge debt burden.

“He resorted to discounting only N150 billion out of the N240 billion expected receivables but later pruned it down to N100 billion.

“So far, we have got N14.7 billion in three quarterly instalments and we have also accessed N30 billion out of the N100 billion we applied for as bridging finance,” he explained.

He also said it was untrue that previous administrations in the country refused to pay the money to the oil-producing states, noting that the discovery of the outstanding funds was made by current commissioners for finance in the Niger Delta states.

When pressed on what the state used the money for, the commissioner for information, Charles Aniagwu, said the state used it to carry out its responsibilities.

“We used it to carry out government activities and projects. Somebody is owing me money, and he pays me the money that he’s owing me, and somebody is asking what did you do with it?” he asked.

Bayelsa State Governor, Senator Douye Diri, said what the state is getting from the 13% oil derivation arrears is too small to make much impact in terms of development.

Senator Diri, who stated this when he received the Interim Administrator, Presidential Amnesty Programme (PAP), Maj. Gen. Barry Ndiomu (retd), in Yenagoa, maintained that the funds were being prudently spent, mostly on infrastructural development.

Meanwhile, Governor Ben Ayade of Cross River State has reiterated his appeal that the FG should accord the state special treatment having been declared landlocked by the Supreme Court.

He spoke in Calabar on the plight of the state having lost 76 oil wells to neighbouring Akwa Ibom State following the Supreme Court judgment.

He said since Bakassi was ceded in 2002 to Cameroon by the International Court of Justice in the Hague, the state was removed from 13 per cent derivation and declared landlocked by the Supreme Court.

He reiterated his call for adequate compensation for the loss of oil wells which, he said, has impoverished the state.

“The federal government has to know what we are going through now. Even in jurisprudence, it is very wrong to take the oil wells from a state with small oil and give to a state that has so much; it is unacceptable.

“The federal government should accord Cross River State a special treatment by finding a consistent way to compensate us for the loss of the oil wells and Bakassi,” he said.

Stakeholders from Niger Delta have petitioned the Economic and Financial Crimes Commission (EFCC) to probe the utilisation of the funds by their governors. They claimed that the governors kept mute on the funds until Wike raised the alarm.

The citizens expressed shock that such huge income was received by the state governments besides the monthly federal allocation and Internally Generated Revenue (IGR) without their knowledge.

A group known as “Good Governance Advocates” in Akwa Ibom State in an open letter petitioned the Chairman of EFCC, Abdulrasheed Bawa, on the matter.

In a letter signed by Comdr. Bassey Samuel, Comdr. Kufre Obot and three others, the group called for investigation against alleged financial improprieties by the Akwa Ibom State government. They also copied the Inspector General of Police, Usman Baba Alkali.

They alleged that the state has nothing to show for the receipt of the money which, according to a non-governmental organisation, Policy Alert, was N171 billion, but that was promptly denied by the government.

The National Coordinator of Akwa Ibom Human Rights Community, Clifford Thomas Esq. said there was no justifiable reason why Governor Udom Emmanuel never mentioned to Akwa Ibom citizens the amount he legitimately collected on behalf of the state as arrears of the derivation fund.

“It’s just a matter of showing us how much you have collected. For the fact that you did not disclose it to us means that you had the intention to steal.

“Proper disclosure presupposes that you are transparent and accountable to the people,” he said.