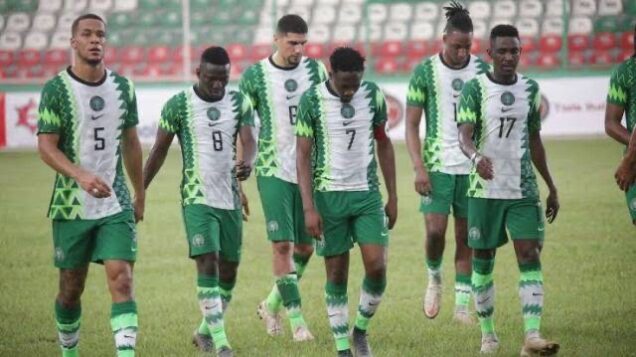 Fernando Santos’s Portugal warmed up for the World Cup with a victory in Lisbon, although preparations for the match were overshadowed by an explosive interview given by Ronaldo earlier in the week.

The 37-year-old striker lashed out at his club Manchester United, where he has fallen out of favour under new coach Erik ten Hag, before suffering gastroenteritis.

It only took nine minutes to break the deadlock against Nigeria, who failed to qualify for the World Cup for the first time since 2006.

Two of Ronaldo’s Manchester United team-mates combined for it, with Diogo Dalot setting up Fernandes to finish after racing on to a fine Joao Felix pass.

Felix, often sidelined at Atletico Madrid, was in sparkling form to ensure Ronaldo was not missed, while Fernandes assumed the captain’s penalty duties to net his second before the break.

A frosty dressing room interaction between Ronaldo and Fernandes had made headlines earlier in the week, but it was the midfielder who stepped up to take the spotlight against Nigeria.

Fernandes fired wide just before the break, wasting a good chance to complete a first-half hat-trick.

Ronaldo, his country’s record appearance maker and the men’s international all-time top goalscorer with 191 strikes, is set to return for Portugal’s World Cup opener against Ghana on November 24, although the team thrilled supporters without him before they depart for Qatar.

Nigeria could have pulled themselves back into the game but Rui Patricio stopped Emmanuel Dennis’ penalty in the 81st minute after a Dalot push just inside the area was penalised.

Joao Mario tucked away the fourth after a brilliant move, involving Felix again and a silky touch from Ramos, a perfect finale for an impressive, dynamic attacking display to answer criticism labelling Santos’s football negative.

It was also a way of quietening the noise around Ronaldo, although that is rarely possible for long, as the veteran forward recovers and readies himself to play at his fifth World Cup.