The government of the United States of America has emphasised the need to deepen trade and investment relations with Africa, saying that African solutions would… 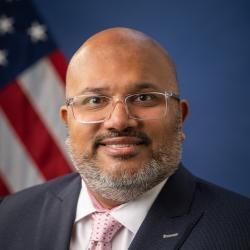 Arun VenkataramanRobert Scott Assistant Secretary of Commerce for Global Markets and Director General of the U.S. and Foreign Commercial Service

Thu, 1 Dec 2022 17:53:46 WAT
The government of the United States of America has emphasised the need to deepen trade and investment relations with Africa, saying that African solutions would be needed to address current and future world problems.
Arun Venkataraman, Assistant Secretary of Commerce for Global Markets and Director General of the U.S. and Foreign Commercial Service, Department of Commerce, disclosed this during a digital press briefing on Thursday ahead of the U.S.-Africa Business Forum in Washinton DC on 14th December 2022.
The Forum is to be hosted by the U.S. Department of Commerce, the U.S. Chamber of Commerce, and the Corporate Council on Africa, in partnership with the Prosper Africa initiative.
The Business Forum will focus on advancing two-way trade and investment partnerships that bolster Africa’s role in the global economy, scale innovation and entrepreneurship, and drive advancements in key sectors.
Venkataraman, while noting that one of the key areas the Forum would address is the future of the United State’s trade and investment partnership with Africa, added that: “Africa is more critical than ever in shaping international roles and collective action and African solutions would be needed to address current and future world problems.
“Africa’s youth population, growing entrepreneur class, the reserve of minerals critical to the green energy transition and regional integration are all key reasons for this [the business forum].”
He said the U.S – Africa Business Forum would bring together key players from the United States and African governments and the private sector to build partnerships that will increasingly be a vital source for solutions to shared challenges going forward.
“Second is in the area of energy and infrastructure finance. Financing for transportation and other infrastructure would be key to supporting the implementation of the Africa Continental Free Trade Area and achieving the goal of a single unified market that ensures Africa’s critical role in global economic activities.
“The third area is agro-business. Food security concerns have long been a challenge to many countries on the continent and recent supply-chain disruptions have further highlighted the need for self-sufficiency in food production in Africa,” according to Venkataraman.
He said working across agriculture and industrial sectors, U.S. entities would be essential partners to ensure that Africa’s growth story involves a growing population that is also involved in the provision of food for Africa’s future.
“The fourth area of focus is the digital economy. One of the most important lessons in the past two years has been the importance of digital technology to economic growth,” the U.S. official said.
He said the U.S. recognises that a successful digital economy is an ecosystem that requires a holistic policy approach underpinned by a strong collaboration of the private sector.
“Working together, we will meet our people’s needs by supporting open networks built on a cyber-secured foundation that fosters skills and capacity building entrepreneurship and innovation and an investment environment that enables a free flow of data that protects personal information,” he added.
On her part, Camille Richardson, Deputy Assistant Secretary for the Middle East and Africa, Department of Commerce for the U.S.-Africa Business Forum, said the lack of physical infrastructure in Africa was discouraging businesses from investing in the continent.
She said the Forum would help to focus attention on major sectors while also helping American companies to build partnerships with African governments and companies.