The police in Imo State Sunday said they have arrested four members of the proscribed Indigenous People of Biafra/Eastern Security Network, (IPOB/ESN) suspected to have… 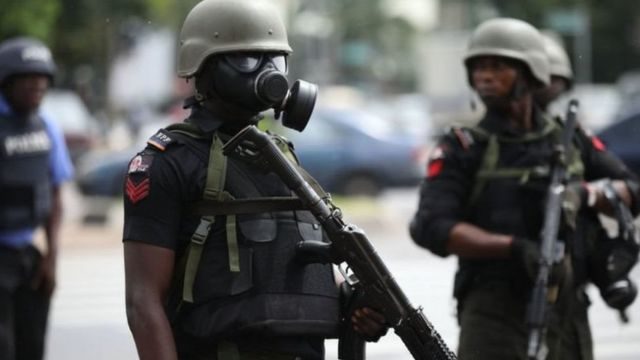 The police in Imo State Sunday said they have arrested four members of the proscribed Indigenous People of Biafra/Eastern Security Network, (IPOB/ESN) suspected to have carried out the attack on Mbieri Police Station on Friday.

The hoodlums had thrown Improvised Explosive Devices (IEDs) into the building, shattering the roof, windows and doors.

The Police Public Relations Officer, CSP Mike Abattam, said in a statement that after the diligent gathering of credible intelligence, they arrested Solomon Umunakwu and Uzoma Umunakwe both natives of Mbieri in Mbaitoli LGA of Imo State.

Daily Trust gathered that they are escapees from the custodial centre’s attack in Imo on 5th April 2021.

The Police also arrested Kelechi Onuoma (aka Ikaba) and kelvin Onuoma (aka Alabalaba) both natives of Atta in Njaba LGA of Imo State, who, in company with their gang members, led the foiled attack on Mbieri Police Station.

The statement said, “The Command’s tactical teams on the same day of the incident at about 2.50 pm, mobilised and stormed the house of Solomon Umunakwu in Mbieri.

“Following the recovery of the vehicles, the police operatives then moved to the hideouts of other gang members in Atta in Njaba LGA of Imo state.

“On searching the hideouts, the following items were recovered; three locally made pistols, one cut to size gun, one Beretta pistol number NAF-P 3296, one dagger, four rounds of live cartridges, two police belts, one Eastern Security Network uniform, one black beret, one army camouflage scarf, two big sacks of weeds suspected to be Indian hemp and one iron saw blade.”

He said that the police operatives are on a manhunt for other fleeing hoodlums.