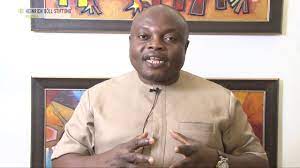 Gbillah stated this in an interview with Channels TV’s Politics Today.

The lawmaker said that nobody expected the CBN to do the work of the Economic and Financial Crimes Commissiom (EFCC).

Recall that the CBN had pegged over the counter (OTC) cash withdrawal per week for individuals at N100,000 and N500,000 for corporate organizations.

“There are allegations in that regard that this policy intends to curb vote-buying and the amount of money in circulation; but like prof (Frank Ozoh, an economist) was saying earlier, we don’t expect the CBN to do the work of the EFCC; we don’t expect such kind of policy trying to control and curb issues that we have institutions to deal with. We think that he (CBN governor) is going beyond his mandate. That is what I personally think.

“So we have not heard from the CBN governor; but it’s a draconian way which has been implemented and we are complaining about. He didn’t brief anybody.”

Commenting on the matter also, Professor Frank Ozoh of Economics at the Federal University, Ndufu, said that the CBN had goofed on re-printing of naira.

Ozoh said, “This policy is highly inordinate giving the environment which we are in. The CBN failed to do imperial studies of what should be the quantum of cash required to sustain some critical level of economic in the rural and urban communities. It is just like they goofed on re-printing of naira. He goofed.”