Why Boko Haram is attacking military formations in N/East 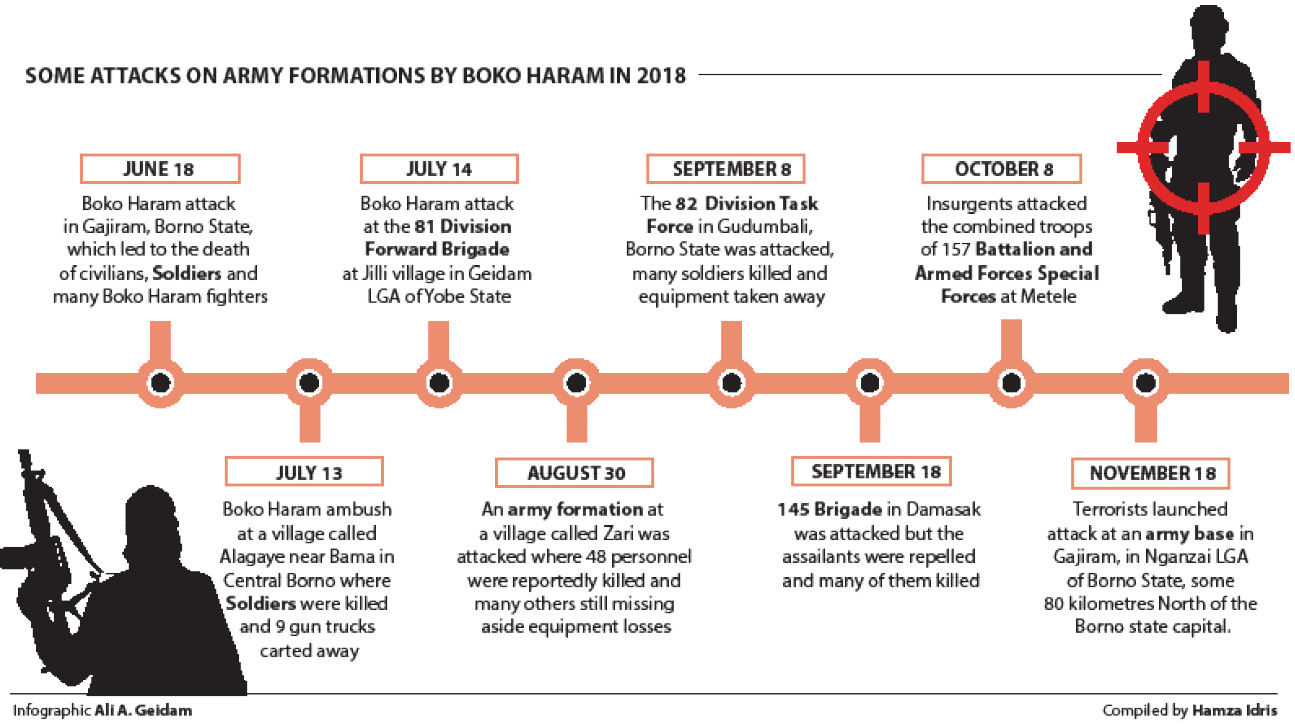 Boko Haram insurgents have upped their attacks in recent times because they have restocked their armoury with fighting equipment looted from several military formations in Borno and Yobe states, sources told the Daily Trust.

The sources also add that there is evidence that the insurgents have smuggled in weapons, including anti-aircraft missiles, guns and other fighting equipment from Libya and other countries which they are using in launching daring attacks on military and civilians.

While the Abu Mus’ab Albarnawi faction, which has

ties with ISWAP, had raided many military facilities in northern Borno, the Abubakar Shekau faction which remains around the Sambisa forest had launched many attacks in Southern and central part of the state.

The insurgents are also taking advantage of the environment that had turned green as a result of the raining season that ended not too long ago in the region.

Also according to the sources, the ‘special arrangement’ with Chadian authorities that allowed Chadian forces to pursue Boko Haram insurgents into Nigerian territory has virtually collapsed.

“The Chadian forces are now limiting their activities to their border. This has emboldened the insurgents to move nearly unhindered along the vast Nigerian borders with Chad, Niger and Cameroon, raiding military facilities and villages and carting away fighting equipment and foodstuff,” one of the sources said.

With a lot of resources at their disposal, the terrorists are succeeding in attacking Nigerian military operatives and civilians, another source said.

The latest attack was on Sunday, November 18 at Metele, where the insurgents attacked the Nigerian Army 157 Task Force Battalion.

Credible sources and soldiers who survived the onslaught said no fewer than 100 soldiers lost their lives, while many others are still missing.

Vehicles and fighting equipment were reportedly taken away by the insurgents while a rescue team comprising soldiers and medics dispatched on Monday, November 19 to recover dead bodies and the injured were also ambushed.

The rescue team members were selected from the Nigerian Army 7 Task Force Brigade stationed in Baga.

“The new tactic of the Boko Haram is to launch attacks towards evening, when it is getting dark so that they disappeared to their safe haven without a trace,” another source said, adding that the Nigerian Air Force has challenge operating through the night.

When contacted yesterday to comment on the renewed attacks on military formations in the North East, the Defence spokesman, Brigadier General John Agim, said he could not comment because he was out of town and did not have the necessary brief to comment on the issue.

The army, in its reaction, dismissed the figures reported by the media, describing them as false.

For his part, President Muhammadu Buhari on Saturday condemned the attack in Metele and promised to ensure the end of the insurgency.

Buhari, who is expected to visit Borno tomorrow, also promised adequate support for soldiers deployed in the volatile North-East.

The Coalition of United Political Parties (CUPP) comprising 40 opposition parties including the PDP, had while reacting to the recent attack on the military, called on President Buhari to sack the nation’s service chiefs.

Why Nigeria troops are on the defensive

An officer in the battle front, who spoke anonymously, said they lost many of their fighting equipment to the Boko Haram without replenishment.

“When you look at it critically, you will find out that more than 70 per cent of the weapons and vehicles being used by the Boko Haram are our equipment, they only got about 30 per cent from elsewhere,” he said.

“And sadly, we don’t get new ones and the few at our disposal are hardly serviceable; the terrorists use what they get from one military formation to attack another formation; that is how they succeeded in stocking their armoury,” he added.

Another military source told the Daily Trust that Nigeria is still getting a lot of intelligence report from the international community about Boko Haram, but could not do much with it.

A security expert, retired Major Salihu Bakari, who has been following the trend in the North East, said the Federal Government must fast track the equipping of the army to save lives.

“Remember that the 36 state governors had recently approved $1b for the government to buy arms but you don’t pick them on the shelves, some fighting equipment may take up to four years to arrive.

“I strongly suggest that government should explore other sources,” he said.

Another security expert, Kabir Adamu, in an interview with Daily Trust yesterday, said the Boko Haram leaders are obviously trying to clear Borno axis prelude to their objective of establishing a caliphate.

“Another possibility is to open a corridor through which they can import materials from the larger Sahel area, Libya and Mali.

“From what we are hearing, the recruitment drive of that particular faction, the Islamic State in West Africa Province (ISWAP) has been growing.

“Another reason is the lack of progress in the formation and operationalization of the Multinational Joint Task Force (MNJTF),” he said.

He said when Nigeria, Chad, Cameroon and Niger formed the MNJTF, funding was not very clear.

“Nigeria bankrolled virtually everything, it’s obvious now that the financial resources have been exhausted,” Adamu said.

He said it would be difficult for countries like Chad, Niger and Cameroon to continue to participate in the MNJTF because they have their own internal security challenges.

“The enemy is aware of this and it takes advantage of it, there are questions regarding the purported number of both human and equipment supply to those units and battalions spread across various parts of the theatre,” he added.

“It’s not enough to send troops to locations without making available the necessary force multipliers, when a unit is under attack and it cannot call for reinforcement it’s a problem,” he stated.