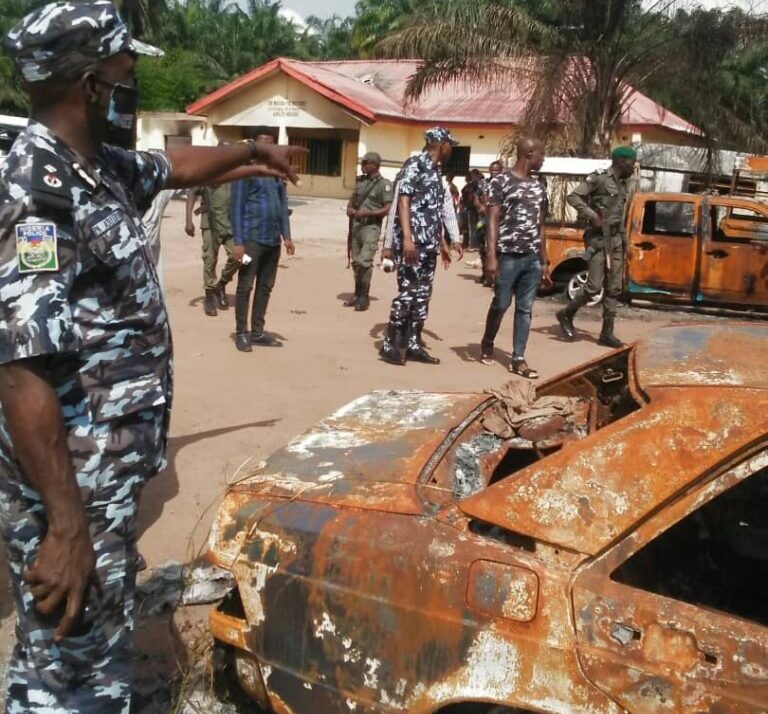 Leader of the IGP evaluation team, DCP Patrick Atayero on Monday during an inspection of some destroyed Police stations and vehicles during the EndSARS protest/NAN

The Inspector-General of Police, Mohammed Adamu, on Friday maintained that the Force would not allow anybody planning to organise violent protest in the country to have his way again following destruction of properties that characterised the two-week nationwide #EndSARS protests.

The police chief also disclosed that significant numbers of inmates who fled various correctional centres across the country during the period have been re-arrested, adding those yet to be re-arrested are strategically being trailed by the force.

Adamu, who stated this in Abuja when he met with all Commissioners of Police physically, stressed that the personnel of the force are ready to confront whoever deems it fit to caution mayhem in the name protests.

“Remember, even our constitution does not accept violent protests, so, those people that are planning to come up with another protest, if they’ve planned it to be a violent one, they should re-think, otherwise, we have prepared to face them,” the police boss said.

He told the commissioners to ensure that all lawful orders are carried out with a view securing the nation.

He added, “We will never allow this type of #EndSARS protests again, it was violent. Peaceful protest is allowed in our constitutions. When this process started peacefully, we provided security for them. We were moving with them to make sure they were not molested by any group of people and it was going on well until it turned violent.

“When it turned violent, they then attacked the people that were even giving them protection. So, we shall never allow any violent protest in this country again. When you talk of peaceful protests, yes, it is allowed but violent protests, never!

“Well-meaning Nigerians should join hands with us so as to prevent recurrence of such. We have made a lot of arrests of those people that escaped from prisons. Some were even arrested in Kano and Kaduna. When they escaped, some of them went back to their business of robbery.

“And the cultists, when they escaped, they went back to the business of cultism especially in Edo. We’ve been able to arrest the significant number of the, and we are still after those that are outside. We call on Nigerians, any information you have about an escapee from any of the correctional centres, please inform us or any other security agencies, so that we can get them back to prison.”