Tributes as Barkindo is buried in Adamawa

The remains of the late Secretary-General of the Organisation of Petroleum Exporting Countries (OPEC), Dr Muhammad Sanusi Barkindo, who died Tuesday night in Abuja at… 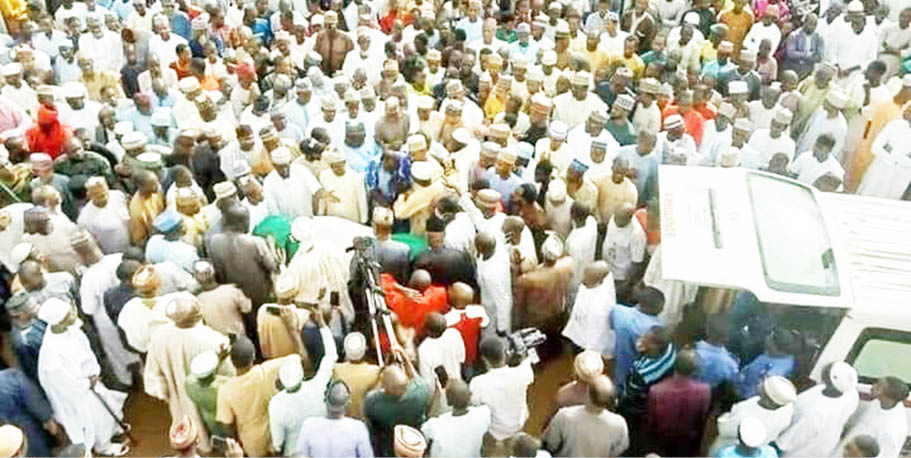 The remains of the late Secretary-General of the Organisation of Petroleum Exporting Countries (OPEC), Dr Muhammad Sanusi Barkindo, who died Tuesday night in Abuja at the age of 63, have been buried in Adamawa State, according to Islamic rites.

His death came a few hours after meeting with President Muhammadu Buhari at the Presidential Villa in Abuja. He was to conclude his second term at OPEC at the end of July.

Barkindo’s remains, airlifted from Abuja, were received by friends and family members at Yola International Airport around 12:30 pm on Wednesday amid tears.

Funeral prayer was performed at the Modibbo Adama Central Mosque located at the palace of Lamido Adamawa at 4 pm before his remains were interred at Damare Cemetery in Yola, the state’s capital.

Younger brother to the deceased, Abduljalal Barkindo, told Daily Trust that the deceased left behind two wives, a son, an aged mother and eight siblings.

He described Barkindo’s demise as shocking and a great loss to the entire family, Adamawa people and Nigerians, saying the family had lost its pillar.

Born in 1959 in Yola, he studied Political Science at the Ahmadu Bello University (ABU), Zaria before proceeding to Washington University for Master of Business Administration (MBA) in 1991 and a postgraduate diploma in Petroleum Economics from Oxford University in 1988.

President Muhammadu Buhari said he was “deeply saddened” by the death of Barkindo, who he described as a remarkable gentleman and enormous national asset.

Buhari, in a statement by his spokesman, Femi Adesina, said Barkindo’s undeniable brilliance and legacies as a dedicated public servant would remain a reference point in the oil and gas industry, international development and the environment sector.

Senate President Ahmad Lawan described Barkindo’s leadership of the global oil cartel as exemplary, noting that the deceased worked assiduously to build cooperation between OPEC and non-OPEC countries to save the energy market at a time of a global crisis.

The governor, in a statement by his media aide, Humwashi Wonosikou, described the six years Barkindo spent at OPEC as glorious, praying Almighty Allah grant him paradise.