The Managing Director of a private security outfit, Tom Salem Integrated Services, says the two guards in a viral video dancing at their duty post… 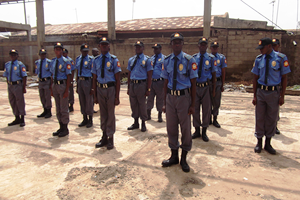 The Managing Director of a private security outfit, Tom Salem Integrated Services, says the two guards in a viral video dancing at their duty post have been withdrawn for training.
Contrary to claims that the duo had been sacked for the act, the MD, who identified himself only as Mr. Abiodun, told our correspondent that they were only recalled for a two-week training programme.

Abiodun, who said the incident happened at Aba, Abia State, promised that they would be posted to another place after the period.

He said, “I am the MD of the company. It is not true they were sacked. We found it very appalling that two security guards on duty in our uniform were actually dancing when they were supposed to be on the alert to do their job.

Their job is not to entertain but to avoid chaos at the location which they failed to do.

“We saw that as a gap and we can’t afford to keep them there. What we did was to remove them and get them brushed up. It is either they return there after two weeks of training or they are posted elsewhere. Even if we return them, we plan to separate them. They are influencing each other.”