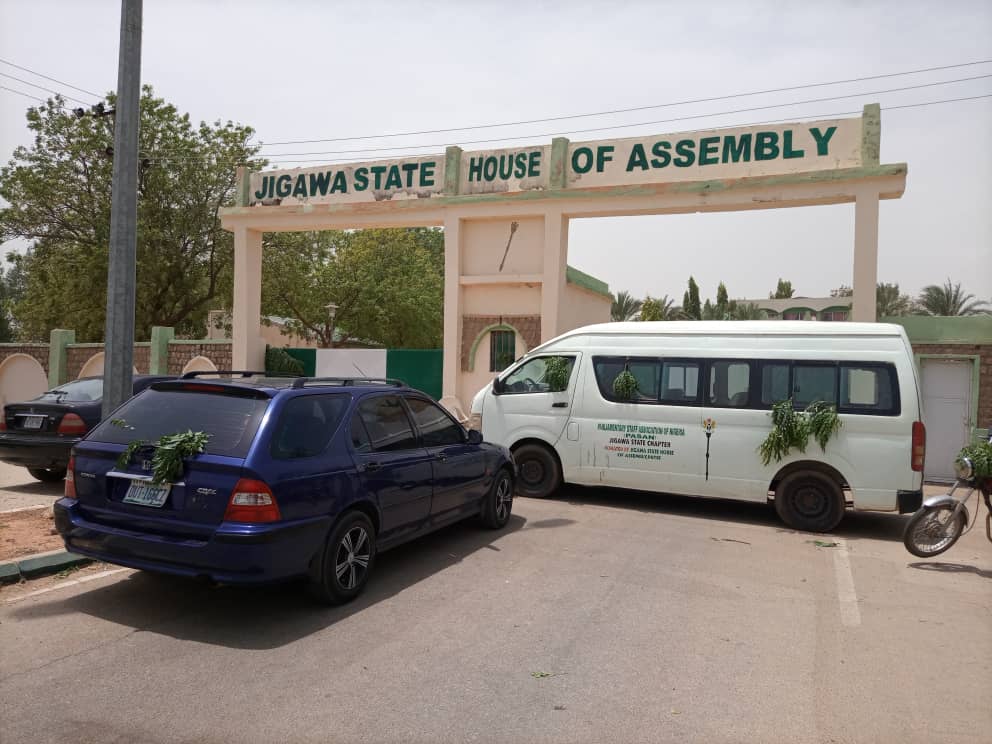 Legislative workers are on strike in states across the country to protest the failure to implement financial autonomy for them.

In Jigawa and Oyo, members of the Parliamentary Staff Association of Nigeria sealed the entrance to the House of Assembly.

In Niger, workers locked up the Assembly complex.

In Kano, workers blocked all access into the assembly complex.

In a notice posted on the wall of the complex, the general public was notified of the commencement of the strike action.

Speaking on the premises of the assembly, the State Chairman of PASAN, Umar Kazaure, said his members would go on indefinite strike after a 21-day ultimatum expired.

The ultimatum was to compel federal government financial autonomy as assented to by President Muhammadu Buhari about two years ago.

He argued that legislative workers have been patient since Buhari signed the bill into law.

The planned strike is to continue for as long as the financial autonomy Act is not duly implemented by the federal government, Kazaure said.

The protesting workers in Ibadan, dressed in their official uniform, carried placards and sang solidarity songs.

Some of the grievances as expressed on the placards read: “Give us our autonomy. Enough is enough”, “We say no to executive slavery”, “Legislative arm is a separate arm of government”, “AGF, implement Order 10, 2020”, “Legislative financial autonomy is a constitutional right”, among others.

The protesting workers, who assembled at the House of Assembly Complex entrance, blocked the main entrance with some vehicles while they sang and danced.

The situation forced a security readjustment at the Oyo State Secretariat, Agodi, Ibadan, as only one gate in the complex was opened.

Addressing the protesters, Oyo PASAN Chairman, Yemi Alade, alleged that the Nigeria’s Governors Forum is behind the plot of not implementing the financial autonomy of the lawmakers.

“Having observed that with the current emasculation of the legislative arm of government, there can be no true democracy.

“The bill has been passed since 2018, then in May, 2020, President Muhammadu Buhari also capped it with a Presidential Order 10, but up till now, they are yet to implement it.

“And this is a fundamental provision of the constitution which has been relegated to the background.

“As a staff of the House of Assembly, if there is no true democracy; no independence, it will affect the democracy of the country.

“It is affecting the entire country not only the staff of the House of Assembly because the principle of separation of power stipulates that each arm of government must act separately and if there is no financial autonomy, all other arms of government will be in slavery to the executive arm.

“Our grievances are against both the state and federal government. There is a presidential order that mandated them to implement this financial autonomy but the Governors Forum is the one behind the non-implementation.’’

Strike cripples parliamentary activities in Kano
Parliamentary works have been crippled at the Kano State House of Assembly complex following the commencement of an indefinite strike embarked on by the Parliamentary Staff Association of Nigeria (PASAN).
The association on Tuesday blocked all access into the assembly complex.
“Further to our recent letters of ultimatum on the non-implementation of Financial Autonomy Act and Presidential Order 10.2020, the National Executive Council of PASAN hereby directs the Union to embark upon an indefinite industrial strike action by midnight of Monday 22nd March, 2021.
“Accordingly, all official activities including committee meetings have been suspended.
“No Chapter leadership should engage in any negotiation as all negotiations must be done centrally,” read a notice posted on the wall.
Also speaking to newsmen on the development on Tuesday in Kano, Mr Ubale Yusuf, the PASAN Chairman in the state, said the strike has just begun.
“Despite the court order, the governors are yet to comply and implement the autonomy. Therefore, we have no option than to embark on an indefinite strike to call the attention of the governors.
“Like you know, both the state’s and the National Assembly are very important to the governors. If really they are working for the progress of their states, the governors must look for a lasting solution.
“And I want to assure you that throughout the strike, there would be no official activity that will be carried out, including committee meetings”, he said.