Smart phones, other devices, pushing us out of business – Clocksmiths 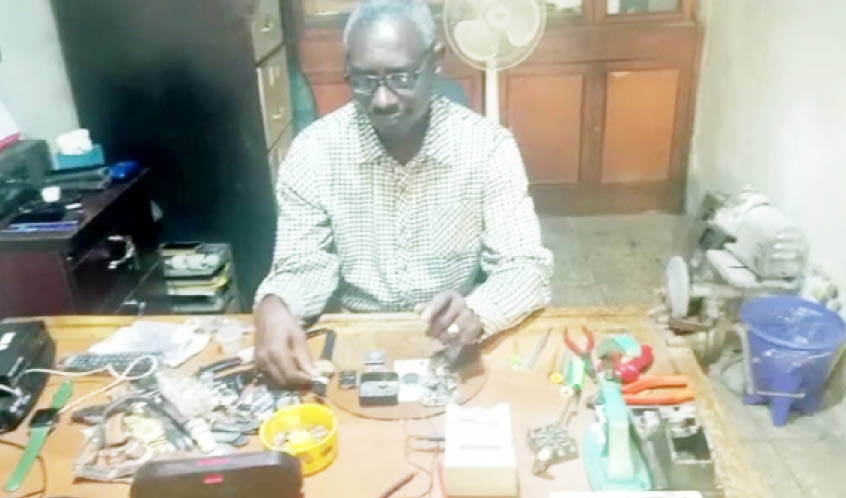 Technological advancement is posing a threat to traditional clocksmiths who say the use of cell phones and other devices are substituting the need for wristwatches and by implication, pushing them out of business. In this report, wrist watch repairers speak of the steady decline in their handwork, and what they are doing to remain relevant.

The wristwatch, a tool that essentially keeps one abreast of the time, is gradually being substituted with other digital devices that serve the same purpose. It is also a tool that helps one to plan ahead and make or take decisions, while some wristwatches serve as a fashion statement. Clock smiths say prior to the emergence of cell phones, car watches, and digital alarm clocks, repairs were booming because almost everyone used wristwatches to keep track of the time. However, with the advent of cell phones and other gadgets, wristwatches are taking a back seat, making their repairers jobless.

“Our source of livelihood is threatened by the changes in sophisticated digital technologies,” said Yusuf Abubakar, a Jos-based local clocksmith, who blames this threat on the acceptability of cell phones and other devices.

Abubakar, whose table is tucked by the corner of the chaotic Ahmadu Bello Way in the city of Jos, says he has been in the business for over 40 years but dejectedly says cell phones and other sophisticated gadgets have become not just a competition, but a threat to their only means of survival. “Apart from phones, other gadgets like Bluetooth, headphones, music players and laptops, amongst others, now come with digital watches. This has resulted in significant reduction in the patronage of wristwatches, and by implication, the repair of wrist watches,” he said. 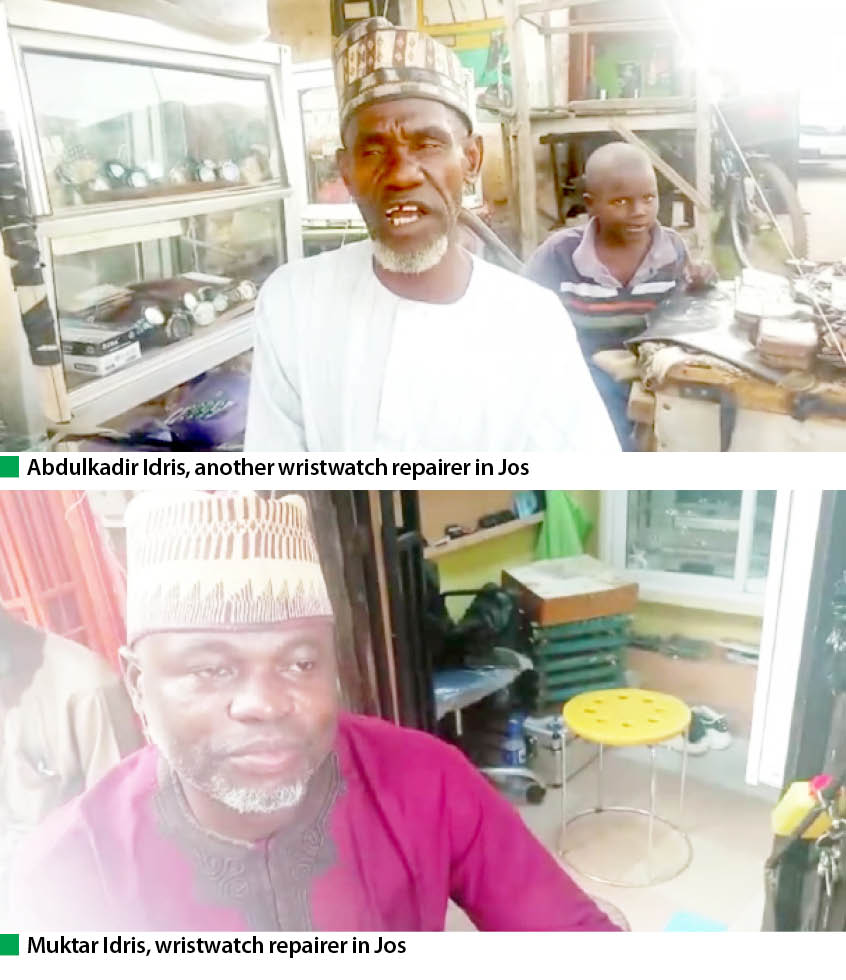 Historically, people relied on both wristwatches and wall clocks to navigate through their social and professional lives. Today, increased advancement and fusion in digital technologies are changing the way people use time. What is generally seen as a positive development in technological advancement is however pushing wristwatch repairers like Abubakar out of the business.

Abubakar, who spent decades learning and repairing watches, said: “Definitely, there is a great difference between now and before, in terms of repairs of wristwatch or wall clock. Nowadays, people hardly come to repair their watches or clocks because they rely on their handsets.”

“In the past, it was not like this. Now, many people only wear wristwatches for fashion and even if they become faulty, they might not bother to repair them because they have alternative means of checking the time. Honestly, there is a huge difference now,” Abubakar added.

Surmounting the current challenge in the business has been tough as some of the watchmakers are now widening their knowledge, especially on modern watches which are more sophisticated. For one to remain in the business, they have to be up to date in learning new skills on how to fix digital gadgets like smartwatches, our correspondent gathered.

“You know, we have different watches. We have the analogue and digital ones. We also have some that use rechargeable batteries. Most people now prefer the ones with rechargeable battery. So, we are now learning how to repair the modern ones,” Abubakar said with a smile.

Like Abubakar, Mukhtar Idris, another clocksmith in Jos, told Daily Trust on Sunday that their business has been gravely affected but they were trying to catch up with modern technology. According to Idris, the occupation is a decent handwork and the earning, even though on the decline, still sustains them.

“I have been in this business for 25 years now,” he said and recalled that “when the phones arrived, there was a change in our business because people started using their phones to check the time, but that doesn’t mean they do not need our service any more.

“Before now, some people owned four to five wristwatches for both fashion and time-checking purposes and they came to repair them when necessary. But now, majority of people no longer use wrist watches,” he said.

Idris, however, said no matter the attraction to phones, there are people he described as addicted to wrist watches. “No matter what, they must wear one. Some people have more than 10 wristwatches and would always ensure that a particular wrist watch matches their outfit at any given time. So, we get patronage from them,” he added.

Speaking on self improvement in order to expand their business, Idris said many clocksmiths have branched into repairing other gadgets such as vehicle remote controls, calculators, phones, among others. “Wristwatches are also electronics. If you have years of experience in wristwatch repair, you can as well repair some of these electronic gadgets and repairing some of these electronics are not as challenging as it used to be because you can use a device to detect the fault in the gadget without even opening it,” he added.

Danjuma Salihu, a Jos resident, a wristwatch lover himself, said with the advent of phones, he rarely wears them because his phone serves him the exact purpose the wristwatch does. He said, “I don’t wear it like before. I used to wear it because there was no substitute. But now, my cell phone has overshadowed the use of a wristwatch. If you see me wearing a wrist watch now, it is just as a fashion statement,” he said.

Speaking to Daily Trust on Sunday, Philip Jatau, another Jos resident, said: “I don’t wear wrist watches any more because they are no longer useful to me. In the past, I wore it to check the time, but now, I do that with my phone. I believe a lot of people now use wristwatches for fancy, not to check the time,” he emphasized.

But there are those who say the acceptability of hand phones and other wireless devices have not in any way threatened their business. Abdulkadir Idris, who fixes wrist watches around Bukuru park in Jos, says contrary to popular opinion, several customers still patronize him.

“For me, my customers have increased because the modern watches are not as strong as the ones we used in the past. Modern watches easily develop a problem and that means more work for me,” he said.

Relying on customers such as Nafana Andrew, who prefers using wristwatches for its elegance, he said though there are significant changes in the way people use wristwatches, the business of fixing them is not on a decline because he could repair more than ten watches in a day.

“I love wristwatches and it is not just to check the time. I love it for its elegance and even with my phone, I still wear a wrist watch,” said Nafana Andrew, whose love for wristwatches keeps repairers such as Yusuf Abubakar, Mukhtar Idris and Abdulkadir Idris in business.

But as technological advancement continues to pose as competition for wrist watch repairers, it also comes with advanced tools that make their job easier. Abdulkadir Idris explains that: “Nowadays, the work is easier as certain devices are used to detect the problems associated with watches. These devices are now available. That is why I do more work than I did in the past. The watch itself is not sensitive compared to the old ones.”