In a move that may change the cause of history in Ebiraland, Kogi State, the state government on December 29, 2022, issued a query to… 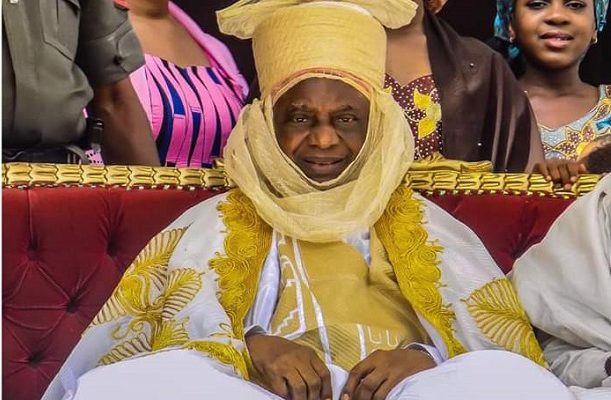 In a move that may change the cause of history in Ebiraland, Kogi State, the state government on December 29, 2022, issued a query to the paramount ruler, the Ohinoyi of Ebiraland, Dr Ado Ibrahim.

In a letter to the traditional ruler, the second highest ranking in the state, the government gave him 48 hours to explain why disciplinary action should not be taken against him for disrespecting President Muhammadu Buhari.

In the letter dated January 5, 2023, signed by Enimola  A. Eniola, a Director in the Ministry of Local Government and Chieftaincy Affairs, the royal father was slammed with the allegation of “insubordination and disloyalty “, for his absence during the president’s visit.

The genesis of the trouble for the 94-year-old monarch followed his failure to receive the president when he came to inaugurate the official palace of the Ohinoyi.

The monarch has never lived at the palace since he assumed the throne; he has been staying at his personal house.

On the inauguration day, he was represented at the ceremony by the Ohi of Okenwe, Alhaji Tijani Mohammed Anage.

Explaining the reason behind the government’s action, the Commissioner for Local Government and Chieftaincy Affairs, Barr. Salami Ozigi Deedat, said the actions of the monarch on the day of President Buhari’s visit are “tailored towards disloyalty, insubordination and tend to affect the peace, security, good image and cohesion of the state”.

The commissioner said the Ohinoyi had made good his earlier negative disposition not to attend the occasion, which had nothing to do with ill health or circumstances beyond his control, as he claimed.

“It’s a deliberate act of disloyalty and insubordination to the President of the Federal Republic of Nigeria and the Executive Governor of the State”, he said.

He added that the royal father gave his consent to the idea to build a befitting, new palace when consulted, but responded negatively when he was invited to attend the inauguration of the project.

He said: “Upon the completion of the project and after the date for the commissioning by President Muhammadu Buhari was approved and announced, I personally paid a visit to Ohinoyi of Ebiraland and informed him of the programme of event.

“Although he responded negatively that he would not attend, I persuaded and entreated him to kindly attend in view of the importance of the project and especially the personality of the president that would commission the project.”

He said the reconstructed palace, which was commissioned by  President Buhari, has all along been the official palace/residence of successive Ohinoyi of Ebiraland.

He recalled that when President Buhari visited Okene in 1984 as Head of State, it was at the same palace that he was received by the then Ohinoyi of Ebiraland, late Alhaji Sanni Omolori.

The commissioner said the  palace has been remodeled and reconstructed by the present administration to a magnificent edifice to be a pride of  every son and daughter of Ebiraland.

Deedat said  it was left for members of the  public to judge, if it was fair and appropriate for the monarch, who is the principal beneficiary of the project, and whose private residence is a few meters away from the venue of the commissioning of the palace to stay put in his house.

“The President, Kogi State Council of Chiefs, His Royal Majesty, Matthew Alaji Opaluwa Oguche Akpa, Attah Igala led other royal majesties and all 1st class chiefs from both East and West Senatorial districts and from their far domains to receive the president at the designated venue in Lokoja”, he said.

Deedat said the government would not treat  the action of the royal father with levity, assuring  the public that the matter will be handled  with utmost objectivity, devoid of any sentiment.

“A panel that will be set up to look into the matter will be dispassionate, diligent and rational and will ensure fairness, equity and justice,” he said.

However, the monarch appears to be losing support even from his people as prominent Ebira citizens and leaders are calling for disciplinary action against him if he fails to give a satisfactory response to the query.

Among those who supported the government’s action is the  elder statesman, Alhaji Isa Ozi Salami, who holds the title of Ohiotenyete of Ebiraland and Alhaji Salihu Abdullahi,  Ajimasi Idu Eyire Uhuapa Ebiya and Secretary, Ebira Peoples Human Rights Defence, Okene.

The group urged the government to ensure that all the facts are unravelled in handling the issue. It also cautioned against using sentiments in arriving at the conclusions.

It said if found wanting, the royal father  should be treated according to the law.

“We have closely watched his conduct for some time now and discovered that he has totally derailed from the assigned roles of his office.

“His activities have been rubbishing the exalted throne which he occupies unlike his forebears who had conducted themselves with grace, honour and dignity deserving of the exalted office they occupied.

“They not only adhered to laid down traditional and government rules formulated to guide their duties, they also refrained from playing to the gallery and they did not position themselves as opposition to the state government needlessly”, the group said in a statement.

The group added that monarchs are expected to be politically neutral by playing father to all and are never expected to be partisan in all their activities, stressing  that has not been the case with the current Ohinoyi of Ebiraland.

It added that the action of Ohinoyi was  capable of leading to unpredictable consequences that may affect the peace and security of the state.

However, an Ebira leader,  Rt Hon. Abdullahi Bello, a former Speaker Kogi State House of Assembly, sued for peace and advised all parties to sheath their sword over the crisis and allow the voice of reason to prevail.

He appealed  to Governor  Yahaya Bello  to exhibit highest level of tolerance in the matter.

“The time to light a candle for peace has come”, as  the state is  heading  into elections and possible transition of governance.

He admonished his kinsmen to “remember that we are trained to accept whatever our father or mother (parents) does to us as children”, and that, “the Ohinoyi is a father to all of us, including the governor himself.

“I appeal that he (the governor) withholds further action on this, more importantly, if the monarch has respectfully responded to the query from the ministry.

“A father will not shoot his children with a loaded gun, neither is a son expected to fire his father to death please,” he said.

Another elder  of Ebira nation, Dr Tom Ohikere, who was  a former commissioner for information took to his blog to caution those fueling the crisis because of vested interest to desist .

“Let us decipher between wrong and right. I was privy to the process of the final establishment of Ohi throne in Ebiraland and I was also very informed of the avoidable and futile attempt to dethrone the Ohinoyi of Ebira land by a pocket of people about 15 years ago”, he wrote on his Facebook account on Tuesday.

Ohikere added that “the senility of some elders in Ebiraland is a condemnable development that deserves the attention of concerned citizens.”

In his response, one of the Ohinoyi’s sons, Prince Malik Ado-Ibrahim, described the action of the state government as unfortunate and insensitive to the events of December 29, 2022.

He said it showed no empathy to the death and destruction the bomb blast caused that day.

“My father took the necessary steps to secure the affected location and have the palace staff tend to the dead and wounded inside and outside the palace.

“At 93, the oldest monarch in Nigeria today and a traditional ruler for almost 30 years, not to mention my father’s accomplishments and charitable deeds locally and internationally, no one can bring into question his caring for his people, his patriotism and his deepest respect for president and presidency.

It’s a shame that this letter is out in the public domain, because it highlights some unfortunate lapses and insensitivity from Lokoja,’’  Malik said.

Meanwhile, the secretary of Ohinoyi of Ebiraland has confirmed that Dr Ado Ibrahim had responded to the query issued to him on 5th of January 2023 by the Kogi State government.

He disclosed in a phone interview with Daily Trust on Wednesday that the Ohinoyi‘s reply to the allegations levelled against him had been submitted to the appropriate authority.

However, a palace source told our correspondent that the monarch left Okene on Wednesday for Abuja on a scheduled meeting with President Muhammadu Buhari on the face-off.