Hoodlums suspected to be armed robbers have invaded a New Life Gospel Church at Sariki-Noma, a suburb of Lokoja, the Kogi State capital, and carted… 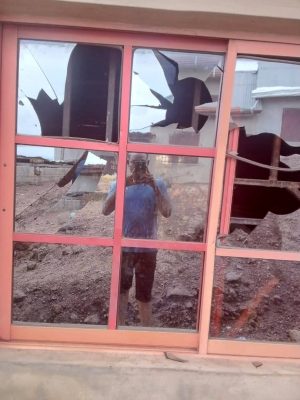 Hoodlums suspected to be armed robbers have invaded a New Life Gospel Church at Sariki-Noma, a suburb of Lokoja, the Kogi State capital, and carted away unspecified sum of money, phones and church property.

The Resident Pastor of the church, Pastor Olorunfemi Ojo, told Daily Trust that the gunmen struck in the early hours of Saturday.

He said the hoodlums, numbering about 15, attacked the church as the elders were about to hold night prayers.

According to Ojo, few hours before the attack on the church, the elders had confronted three unknown men seen trying to force their way into Victory Primary School that shared the same fence with the church.

He added that shortly after the encounter with the three men, the hoodlums in their numbers invaded the church, destroyed the windows and forced their way into the church building.

Thereafter, he said the hoodlums descended on the church elders and beat them with planks, broken bottles and stones, inflicting injuries on them in the process.

However, the pastor stated that some of the hoodlums who raided the church were caught by vigilantes in another operation in the vicinity that night, saying that the security agents had intensified manhunt for the fleeing hoodlums.

He added that the police authorities were contactee and some officers had come to establish the level of damage in the church.

The Kogi State Police Public Relations Officer, SP William Aya, said his office has not been briefed about the incident by the Nigeria Police ”B’ division in Lokoja, which handles the case.