As public and private schools across the country resumed classes on Monday for the second term 2020/2021 academic session, there was a low level of… 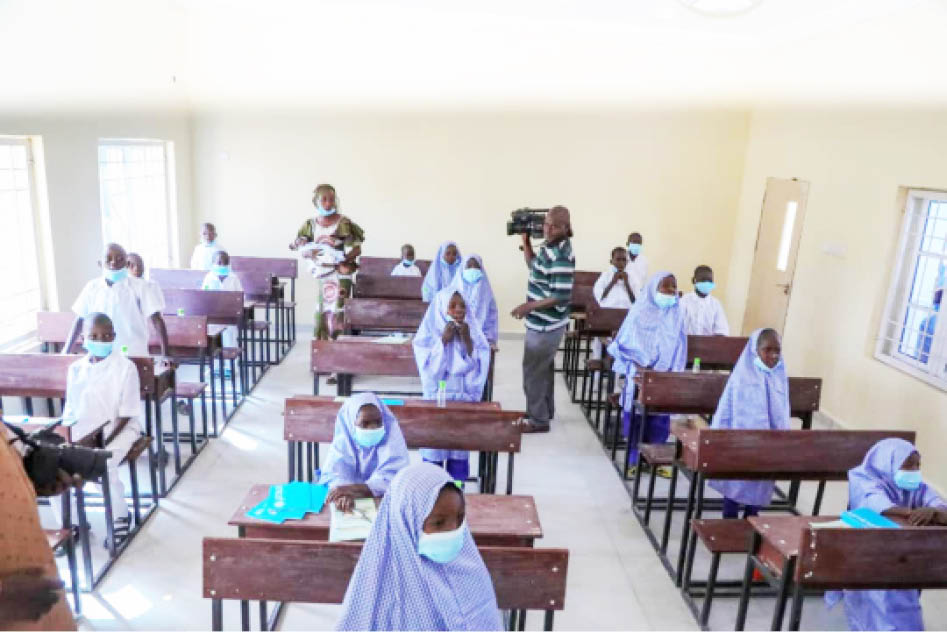 Pupils in class in one of the mega schools built and recently commissioned by the Borno Governor, Prof. Babagana Umara Zulum in a low-income community called Abuja-Sheraton at Maisandari ward of Maiduguri Metropolitan Council in Borno State

As public and private schools across the country resumed classes on Monday for the second term 2020/2021 academic session, there was a low level of compliance with COVID-19 protocols, Daily Trust reports.

The federal government had announced that schools should resume on Monday, January 18, 2021, after consultations with relevant stakeholders and having taken appraisal of the situation.

It said schools must ensure the compulsory wearing of face masks by all students, teachers, and workers and that temperature checks and hand washing facilities must be at strategic locations in all schools.

However, some parents and bodies, including chairmen of various chapters of the Academic Staff Union of Universities, ASUU, had expressed concerns over the resumption of academic activities on January 18, saying the institutions were not ready for safe reopening.

Visits to some schools across the country by our reporters yesterday showed that the COVID-19 safety protocols were mostly observed in the breach.

While some appreciable level of adherence to the COVID-19 protocols was observed in private schools, they were majorly defied in public schools.

In Oyo State, for instance, teachers and students, especially in public schools, shunned the COVID-19 protocols.

Our correspondent reports that though the state government had ordered schools to resume last week Monday, the level of compliance of public schools with the preventive measures was very poor.

Some private schools were, however, seen enforcing compliance as they turned some students back home for their failure to put on their facemasks.

It was observed that though many of the schools placed buckets of water in the front of their building, many students refused to wash their hands.

Similarly, students of public schools at Oba Akinbiyi Model School and some of their teachers were neither wearing nose masks nor putting on face shields.

Rivers State public primary and secondary schools were not observing the COVID-19 protocols, our correspondent reports.

It was gathered that even though the state government provided COVID-19 safety gears such as washing hand buckets, pupils and students of the schools were not making use of them.

At the St. Andrew’s State Primary School, Diobu, Port Harcourt, our reporter observed that all the four schools lumped together at the expansive schools’ premises had washing hand buckets positioned at the entrance but pupils were not washing their hands before entering their classes.

At State Model Primary School, Churchill Road, Port Harcourt, our reporter noticed that the entire school had only one hand washing bucket positioned at the school entrance but pupils failed to wash their hands before gaining entrance to the school premises.

Our reporter learnt that the task force had visited many schools in the state to ensure COVID-19 protocols compliance.

Schools in Borno State reopened on Monday but most students failed to comply with the infection prevention and control measures.

Our correspondent observed that while most of the hand-washing stations in the schools were not functional learners were allowed into schools without nose mask, water, soap, and hand sanitizers were not available in most schools visited.

Commissioner of Information, Home Affairs, and Culture, Babakura Abba Jato, said that ministries of health and education were working to enforce all COVID-19 protocols in schools.

The Principal, Government Secondary School, Zajiri, Maiduguri, Usman Mansur Kyari, said school reopening was safe and consistent with measures put in place by the government and that stricter enforcement of COVID-19 safety measures would start when all the students returned and lessons commenced fully.

Students of schools in Ogun, Bayelsa, and Gombe and Yobe states on Monday resumed academic activities for second term 2020/2021 session.

Our correspondent who visited some schools in Abeokuta, the state capital, observed that hundreds of students were seen at the entrances of their school premises with some of them not complying with the  COVID-19 protocols.

Students without face masks were prevented from entering the school premises.

It was also observed that while schools made arrangements for hand washing, social distancing was not observed even as the majority of the schools visited did not provide infrared thermometers for checking the temperature of the students as directed by the state government.

Similarly, most of the schools visited in Bayelsa State partially complied with COVID-19 protocols; while some had hand washing equipment, they failed to observe proper physical distancing.

At St Jude Girls Secondary School, Amarata, Yenagoa, every safety device was seen at the gate, but a female teacher directed our reporter to the State Ministry of Education or Secondary Education Board because they were not allowed to grant press interviews as civil servants.

Some private schools along Ebis Mechanic Road, said they were trying their best to adhere to the government safety protocols but declined further comments.

Also, in Gombe State, our correspondent reports that students and teachers were partially observing the COVID-19 protocols. In some of the schools visited there was strict adherence to the guidelines, while others failed to observe them.

At the Jalo Waziri Junior Secondary School, the students were strictly observing the safety protocols right from the school gate by washing hands and no student was allowed entry into the school premises without wearing a face mask.

However, in the primary section of the school, there was no observance of social distancing.

In Benue State, resumption in many public schools was scanty while their private counterparts were populated with full compliance with safety protocols/measures against COVID-19.

The management of some of the schools visited, however, claimed that the government planned to make further provision for their safety in line with the rules against the disease.

At the Government Girls College, Makurdi, staff members were seen going about their duties, with most of them without facemasks.

In Lagos and Osun, students defy protocols outside school premises

Majority of schools in Lagos and Osun states adhered to the COVID-19 protocols while in school premises but shunned them outside.

At Agidingbi Senior Grammar School, Lagos, there were measures including provision of wash hand basins with soap and sanitizers at the entrance as well as in front of the classrooms.

There was also, temperature check with the infrared thermometer at the school entrance while only 30 students are allowed per class in order to ensure the social distancing protocol.

It was, however, observed that majority of the students only masked up when they were within their schools’ premises.

Similarly, the pupils seen in the streets of Osogbo in Osun State were not using nose cover and they were seen playing and hugging with disregard to COVID-19 social distancing warning.

Our correspondent reports that some parents in Lagos on Monday expressed their concern over the school resumption.

Olajide, who took to his Twitter handle to express his concern, said he was displeased with the arrangement he saw when he took his children to school on Monday.

Another parent, Aramide, said, “My children are staying home at least for this week or even next.

“I can’t control their actions in school and neither do I trust their caregivers and teachers to be particular about them.”

The Chairman of the Lagos State Universal Basic Education Board (SUBEB), Wahab Alawiye King, however, reassured parents about the safety of their children and wards.

He insisted the state government has ensured some measures are put in place for the safety of the kids.

Our correspondents report that schools in the Federal Capital Territory (FCT), Akwa Ibom, Kano, and Ekiti states kept to the COVID-19 guidelines and protocols.

In the FCT, schools that complied with the COVID-19 protocols include Government Science Secondary School (GSSS) Abaji and  Kubwa III Model Primary School where buckets of water and liquid soap were provided at each block of classrooms, in addition to two others stationed at the school gate.

Also, the staff members of the schools were seen wearing face masks, while some parents/visitors who came to the school were stopped at the school gate and ordered to wash their hands before they entered the school.

Also, in Kano State, primary, secondary and tertiary education institutions resumed on Monday with general strict compliance with COVID-19 protocols in some of the schools visited by our correspondent.