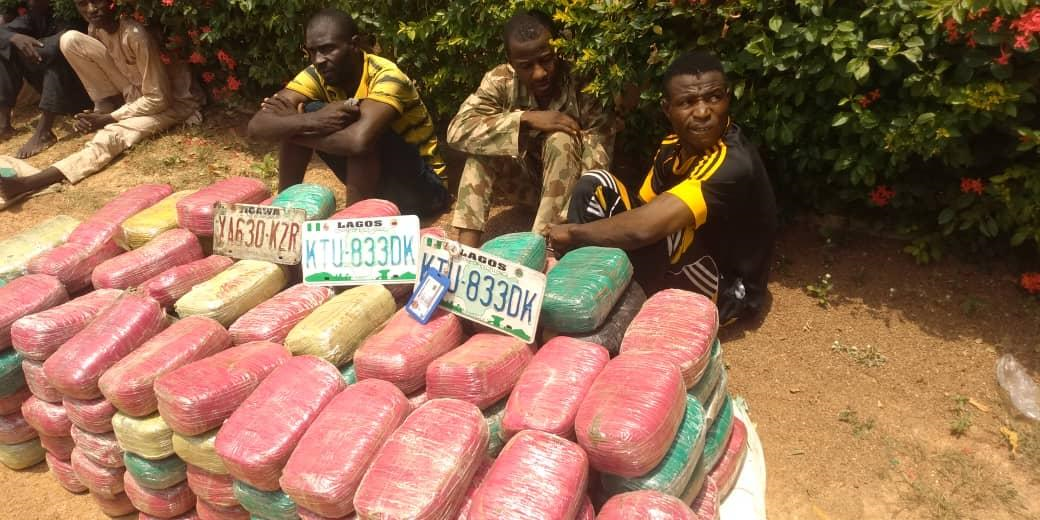 Photo of the army Corporal and his accomplices

Police in Jigawa State have arrested a Corporal in the Nigerian Army in possession of 169 blocks of substances suspected to be Indian Hemp as well as four other accomplices in Ringim local government area of the state.

This was disclosed by the state Commissioner of police, Bala Zama Sanchi while parading the suspect, Cpl Muzambilu Abdullahi at the state police command headquarters.

He said the suspect was arrested by the men of operation puff adder while on patrol, adding that the suspect ran out of luck when their vehicle was involved in an accident while on their way from Kano to Nigeria-Niger border town of Maigatari.

Sanchi noted that when the police arrived the scene of the accident, they only met an army Corporal in camouflage uniform and that after a search was conducted on the vehicle, it was found to be loaded with Indian Hemp.

The CP further stated that the army Corporal was in the vehicle to give escort to the consignment which was billed for delivery in Maigatari.

He said the suspect, who claimed ignorance of the nature of the consignment in the vehicle, told the police that the owner of the vehicle, one Alhaji Abubakar, who took to his heels after the accident, only invited him to escort him without disclosing to him what he was in the boot of the vehicle.

Meanwhile, two others, Nurah Mohammed and Abubakar A. Ahmed of Gawo quarters in Gumel town of Gumel LGA, were also arrested by the police at the scene of the accident.

The CP added that upon interrogation, the suspects claimed they were at the accident spot, looking for the number plate of the vehicle earlier involved in the accident.