The Department of State Security (DSS) and the Nigeria Police Force in Ebonyi state have neutralized some members of the Indigenous People of Biafra (IPOB). 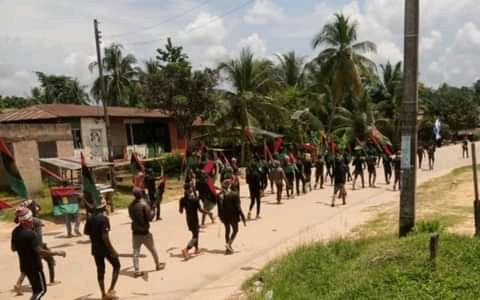 The Department of State Security (DSS) and the Nigeria Police Force in Ebonyi state have neutralized some members of the Indigenous People of Biafra (IPOB).

The members of the outlawed group lost their lives when the military joint force stormed their hideout in two separate areas in the state.

According to him, three IPOB suspects already in their net provided the evidence to the command, which aided the security agencies’ raid f three hideouts of the gang in the state.

He said, “The operation, spearheaded by the Command’s Tactical teams and assisted by the Military and DSS in the State, was prompted by quantum pieces of reliable evidence, professionally elicited from the interrogation of Nnamdi Ngwuta Obaji aka State Commander No. 3 and another operative of the outlawed group, Felix Ogudu who were earlier arrested.

“While accessing/cordoning the Camps, the combined teams were ambushed by the criminal elements with rains of sporadic shooting in their direction and without hesitation, the allied team swiftly responded and engaged them in the same manner and of course, their superior firepower subdued the miscreants, who chanted morale-boasting war songs, dived into the Opeke River and swarm to different directions as they scampered for safety.

“However, a good number of them were neutralized while many escaped with bullet injuries. Also, after dislodging the criminal elements and taking over the ground, the camp, which they christened ‘IGBO BU IGBO TRAINING SCHOOL CAMP’, was ransacked and destroyed. Equally, a wooden bridge under construction intended to aid the miscreants in their coming and going was dismantled.

“Also, one Mercedes Benz 190 car with Reg No. SKA 306 AA, one Biafran-map calendar and other things, were recovered. However, a good number of them were neutralized.”

Anyanwu further noted that the gang was also be suspected to have taken part in the attack of the Provost of Federal College of Education, Isu Onicha along Agba axis a few days ago.