As the 2021/2022 Nigeria Professional Football League (NPFL) season nears the business end, clubs chasing for continental tickets and those fighting against the drop have… 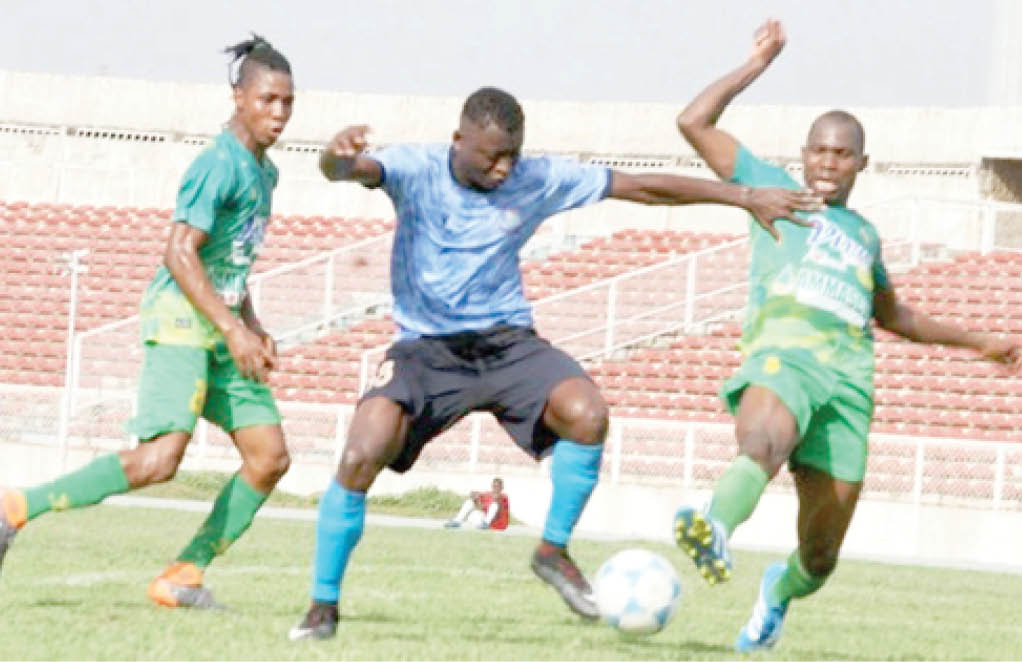 As the 2021/2022 Nigeria Professional Football League (NPFL) season nears the business end, clubs chasing for continental tickets and those fighting against the drop have become more desperate for points.

This weekend, week 29 matches will be staged across match venues and the spotlight will expectedly be on the clubs in the bottom half of the table who must win to brighten their chances of survival.

After week 28 matches, Rivers United (58), Plateau United (54), Remo Stars (46), Rangers International (45) and Kwara United (43) points are the top five teams that are leading the chase for the title as well as the available continental tickets.

Rivers United are favourites in the race for the title but having been tripped 2-0 by Heartland in their week 28 match in Owerri, they are also looking a bit vulnerable as Plateau United can also fancy their chances now that the gap between them is still four points.

Kwara United who are in fifth position with 43 points can leapfrog Rangers into fourth place if the unexpected happens to the ‘Flying Antelopes’ in their home fixture with Dakkada but they are able to scale Rivers United hurdle in Port-Harcourt.

As the trio of Remo Stars, Rangers and Kwara United jostle for points to sustain pressure on the duo of Plateau United and Rivers United, MFM, Kano Pillars, Dakkada, Heartland, Lobi Stars and Katsina United who are leading the table from the bottom will be in desperate need of results in their relegation battles this weekend.

This weekend’s biggest relegation battle no doubt is the match between former Nigerian champions Kano Pillars and Heartland FC at the Moshood Abiola Stadium in Abuja.

Pillars have found themselves in an unfamiliar position on the table as they are presently languishing in 19th position with only 29 points from 27 matches.

The ‘Masu gida’ boys as Kano Pillars are called are seriously gasping for breath and must leave no stone unturned in securing victory over Heartland, if they are to keep their hopes of survival alive.

Both Pillars and Heartland are struggling but the ‘Nazi millionaires’ have shown signs of resurgence since the arrival of coach Erasmus Onah as they’ve been able to produce some shocking results including their recent 2-0 defeat of table toppers Rivers United at the Dan Anyiam Stadium in Owerri.

On the same day Heartland recorded the massive victory over Rivers United, Pillars were uprooted by fellow relegation side MFM who defeated them 2-1 in Ijebu Ode.

While the loss in Ijebu-Ode sunk Pillars deeper into relegation waters, Heartland’s win lifted them to the 17th position one point behind Lobi Stars.

Although it is not going to be an easy ride for Pillars, they are capable of grinding out a decent result against the visiting ‘millionaires’ from Owerri.

The Aper Aku stadium Makurdi will also stage another must win match as Lobi Stars who are facing relegation welcome Sunshine Stars of Akure in a battle of stars.

Although Lobi Stars have made slight improvement in the second stanza since the return of Dominic Iorfa as the Vice-chairman of the club, the ‘pride of Benue’ are still yet to heave a sigh of relief.

They are placed 16th on the table with 32 points from 28 matches which makes them susceptible to ‘attack’ by Pillars, Dakkada or Heartland who can easily overtake them, if they falter in any of their matches, especially at home.

Lobi Stars opponents in tomorrow’s week 29 fixture are not having relegation worries but 38 points is not enough reason to slumber because only seven points separate them from Heartland who are in 17th place with 31 points.

Therefore, the ‘Akure gunners’ will be in Makurdi to compound Lobi Stars’ woes and solidify their position on the table but the impressive home record of the ‘Pride of Benue’ in the second round should be a source of concern to the visitors.

Apart from their 0-0 draw with Kano Pillars, Lobi Stars have won all their home matches since the restart of the season. They defeated Rangers 2-0, Gombe United 2-1, Nasarawa United 2-1 before edging Katsina United 2-1 in their last home match.

Lobi Stars striker, Godfrey Utim, who scored in the home matches against Rangers and Nasarawa United is optimistic of victory over Sunshine Stars.

“We are ready to battle Sunshine Stars for the maximum points. It is not going to be an easy match but we are equal to the task. We will handle them.

“This is not the time to drop points, especially at home so we are going to do everything possible to win the maximum points.

“We have put behind us the narrow loss at Enyimba. A new challenge is before us and that is what we are looking at for now,” said the former Inter Allies of Ghana and Akwa United striker.

Another team faced with relegation is Katsina United who will welcome former African champions, Enyimba at the Muhammadu Dikko stadium Katsina.

The ‘Chanji boys’ as Katsina United are called are also hovering around the drop zone but after their shocking 1-0 home loss to leaders Rivers United, they have not dropped points at the Muhammadu Dikko Stadium again.

One interesting thing about this potentially explosive fixture is that the new technical adviser of Katsina United, Usman Abdallah, once managed Enyimba. He won a league title with the ‘Peoples elephants’ and led them in their continental campaign. He, however, left the camp of the back-to-back CAF Champions League winners under controversial circumstances.

Surely, the newly appointed Super Eagles assistant coach has an axe to grind with his former club so he will be happy to get a win against them.

“Personally, I am more interested in the three points at stake than any other considerations.

“We know the importance of victory in all our remaining matches, particularly our home games.

“However, we are not putting the players under any form of pressure. They also know what is at stake.

“There are no hard feelings between us. I still maintain a cordial relationship with the Chairman of Enyimba and every other person in the club. I will be happy to welcome them to Katsina,” said the former coach of Wikki Tourists.

Enyimba must also be wary of one of their former strikers, Tosin Omoleye who is now leading the attack of Katsina United. Together with the mercurial Destiny Ashadi and ageless Usman Bara’u, Omoleye may lead the execution of United’s plot against the mighty elephants of Aba.

Elsewhere, relegation-threatened Dakkada will be punching above their weight away from home as they visit Rangers International in Awka.

It is a clash of fourth at the top versus third from bottom but the Uyo side will also fancy their chances against the continental ticket chasing Antelopes.

However, the odds favour the coach Abdul Maikaba tutored Rangers who have recovered their winning formula after initial hiccups at their adopted home ground in Anambra State.

At the Lekan Salami stadium Ibadan, 3SC who are 11th on the log may have a struggling MFM for breakfast. However, if they drop their guards, they may pay dearly because the ‘Olukoya boys’ recently pulled down Pillars 2-1 to prove that they may be ‘dead’ but are not yet buried.

Title chasing Plateau United who are waiting for further slips from Rivers United are guests of another relegation troubled side, Abia Warriors in Okigwe, Gombe United host Kwara United at the Pantami stadium, defending champions Akwa United who are smiling again following the arrival of coach Deji Ayeni will welcome Niger Tornadoes to the “Nest of champs in Uyo’ while Nasarawa United entertain Wikki Tourists who were smashed 3-1 by Plateau United last Sunday in Jos.

Without any doubt, the biggest match of week 29 is the mouth-watering clash between leaders Rivers United and ambitious Remo Stars.

Although the result of the match may not alter the table as far as the top three is concerned, there is so much for play for Rivers United must win to maintain their four points lead in case Plateau United win at Abia Warriors.

And Remo Stars who have Rangers breathing down their necks must do everything to avoid defeat because it will pave the way for the ‘Flying Antelopes’ to dislodge them from their exalted third position.