In what appears a festering crack in the opposition Peoples Democratic Party (PDP) in the South-West, the spokespersons of the party in the zone on… 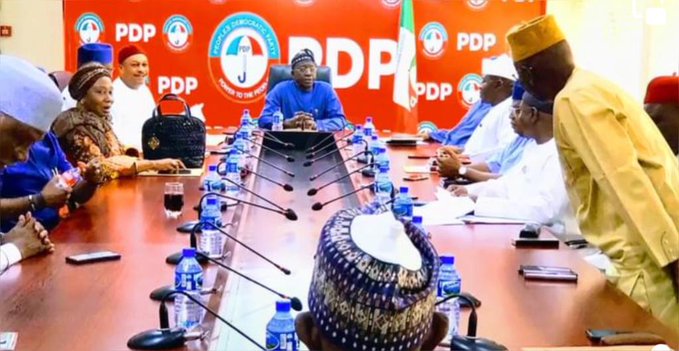 In what appears a festering crack in the opposition Peoples Democratic Party (PDP) in the South-West, the spokespersons of the party in the zone on Saturday met in Lagos, distancing themselves from the call by the Oyo State Governor, Seyi Makinde for the resignation of the National Chairman of the party, Dr. Iyorchia Ayu.

The Publicity Secretaries of the PDP in Ogun, Ondo, Lagos and Ekiti said there was no justification for the resignation of the National Chairman.

Daily Trust on Sunday reports that the party has been polarised following call in some quarters for the resignation of Ayu.

Makinde, the only PDP governor in the South-West, had called for the removal of Ayu, ditto a former Deputy National Chairman of the party, Chief Bode George who argues that both the Presidential candidate and the National Chairman cannot come from the same zone.

But the South-West spokesmen who met in Lagos dissociated themselves from the call for Ayu’s resignation.

They said the National Chairman cannot resign at this critical moment the campaign is about to kick off, stating that while the concerns of some of the leaders in the South-West are “deeply appreciated”, the attention should be on rallying members of the party to support all its candidates vying for various positions.

The PDP Publicity Secretary in Ondo State, Mr. Kennedy Peretei who read the resolutions after the meeting said the leadership of the party in the five state chapters of Ondo, Osun, Ogun, Ekiti and Lagos are behind the National Chairman.

Peretei said, “We wish to affirm our faithfulness to the PDP constitution which clearly stipulates procedure for leadership election and removal. As the only political party that has not changed name or logo since its establishment in 1998, the party cannot afford to appear unserious.

“We do not see any justification for the resignation of our National Chairman, especially at this very critical stage of preparation for elections.

“Dr. Iyorchia Ayu was duly elected at a properly constituted National Convention with a four year mandate and recently received vote of confidence of the party’s National Executive Committee, at its 97th meeting in Abuja.

“Our party has championed the sanctity of the PDP Constitution (2017 as amended) . We must therefore do everything to maintain this sanctity. Any action that undermines the spirit of the party’s constitution at this crucial stage can only be considered as a deliberate attempt to sabotage the party’s efforts at winning in the coming general elections.

“The concern of our zonal leaders and their determination to protect the interest of our members against any form of marginalization is deeply appreciated. However,  our focus should be directed mainly to encouraging our teeming members to rally round our candidates vying for the Houses of Assembly, House of Representatives, Senate and Governorship positions and ensure that they win elections.

“The leadership of the party in the aforementioned states pledge our unwavering support and unalloyed commitment to our Presidential Candidate, former Vice  President of Nigeria,His Excellency, Alhaji Atiku Abubakar and his running mate, His Excellency, Senator Ifeanyi Okowa.

“The mission to rescue, rebuild and redirect Nigeria is task that must done, to save our country from imminent total collapse.”

Earlier, the Lagos State PDP had distanced itself from the call for Ayu’s resignation in a statement by Amode, saying at no time a meeting of the South-West stakeholders was held to call for Ayu’s removal.

Amode said the leadership of the party in the state distanced itself from the call for the removal of Ayu.

The party also commended the party’s National Working Committee (NWC) for its efforts at rescuing the party.

The statement read: “We believe that the Peoples Democratic Party – PDP had survived as the only political party since the inception of the recent democratic dispensation due to its adherence to the constitution of the party, rules of law and regulations guiding the administration of the party.

“As much as we extoled His Excellency Engr. Seyi Makinde as our leader in the southwest but there are no prior meeting where such agreement was reached with the leadership of the party in Lagos State where such position was agreed.”