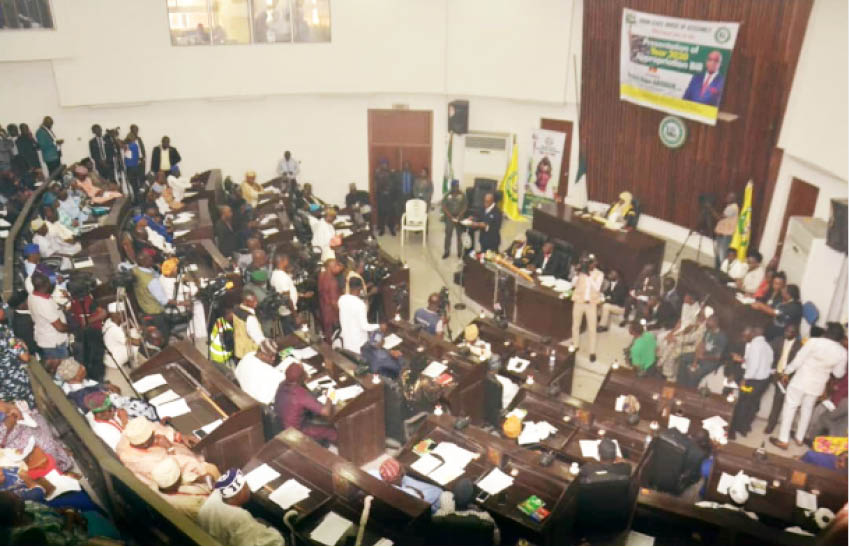 The Ogun State House of Assembly on Tuesday suspended a serving lawmaker and former Deputy Speaker of the Assembly, Dare Kadiri, indefinitely.

Kadiri had written a petition which led to the ongoing trial of the Speaker, Olakunle Oluomo, by the EFCC over alleged N2.5 billion fraud.

Oluomo was arraigned before a Federal High Court in Lagos last Tuesday for allegedly diverting N2.5bn belonging to the Assembly.

Others arraigned alongside the Speaker were the Clerk of the House, Taiwo Adeyemo, and Oladayo Samuel, the Director of Finance.

The trio were, however, admitted to bail by the court.

Kadiri was impeached as the Deputy Speaker over alleged gross misconduct in March 2021.

Shortly after his removal, the former Deputy Speaker accused Oluomo of shrouding the House’s financial records in secrecy, and thereafter petitioned the anti-graft agency to probe him.

The former Deputy Speaker also accused Oluomo of forging his signature to withdraw up to N50 million from the Assembly’s bank account.

At Tuesday’s sitting, Oluomo announced the suspension of the two lawmakers.

The Speaker explained that the lawmakers “breached the provision of the legislative house power and privileges.”

This, he said, violated Section 17 of House Power and Privileges.

He said, “Order 6 rule 19:2 says that where a matter of privilege arises, it shall be taken into consideration immediately. In the note of that, I want to say that I received a resolution by appropriate members of the House raising the issue of privileges.

“Resolution 1310, 2022, suspension of some honourable members for a breach of the provision of the legislative House Power and Privileges having been found to have severally breached the rights and privileges of the assembly and its leadership.

“This was done through violation of provision of section 17 of legislative house power and privileges. The following honourable members, Oludare Kadiri, Solomon Osho are hereby suspended from the house and its activities forthwith until further notice in line with provision of sections 14 and 15 of Legislative Powers and Privileges Act, 2017.

“Since this has been signed by the appropriate number of people, it required no vote or anything, so, they stand suspended.”

Already, Kadiri had been suspended by the ruling All Progressives Congress (APC) for alleged anti party activities. He was suspended by the leadership of Ward 11 in  Ijebu North Local Government Area of the state.

A report jointly signed by the General Secretary and Ward Councillor, Olarenwaju Abiodun and Sobonojo Adeniyi, said the suspension was affirmed by the ward congress.

The party leaders accused Kadiri of hobnobbing with the opposition and vowing to work against Abiodun’s reelection.