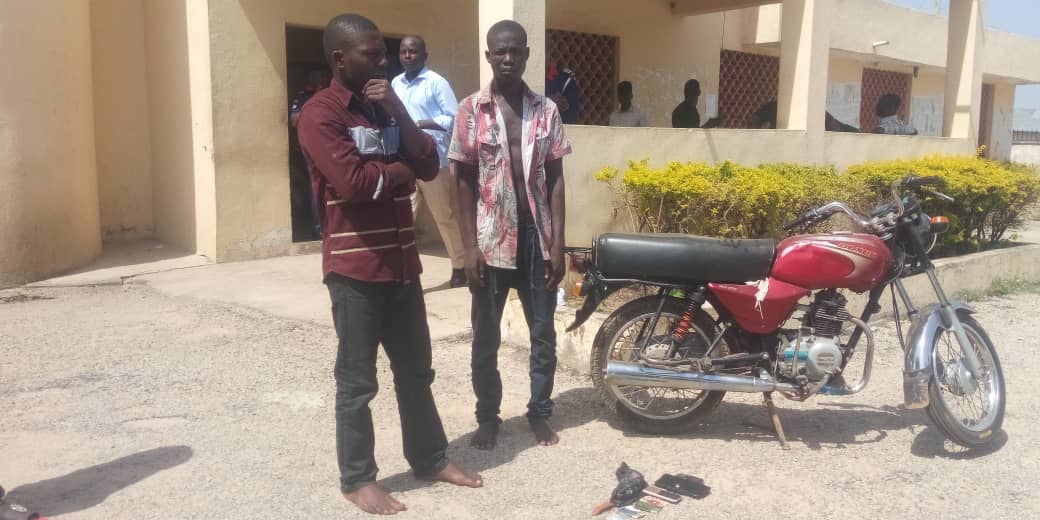 The suspected Motorcycle thieves also paraded by the NSCDC in Bauchi on Tuesday. Photo by Balarabe Alkassim, Bauchi

Bauchi State Command of the Nigeria Security and Civil Defence Corps (NSCDC) has paraded suspected fraudsters and Motorcycle thieves, arrested in the state.

Briefing journalists during the parade, the State Commandant, Halliru Usman, disclosed that the suspected fraudsters, Yaya Abaji and Abubakar Usman aka Alaramma were arrested by the NSCDC operatives attached to Kirfi Division.

“The suspects conspired and collected the sum of N380,000 from Kingsley Izuchukwu and Abubakar Dahiru both from Dukku LGA Gombe State that they will make the sum of N500,000 for them, using something called ‘Bakin Gadali’,”he said.

Usman further said that the suspected Motorcycle thieves, Aminu Adamu of Yelwa area and Salisu Umar of Wuntin Dada were arrested on June 12th, 2019 for stealing a Motorcycle belonging to Ishak Abubakar.

“Investigation revealed that the suspects disguised as Military and police officers respectively. The suspects collected a Motorcycle, belonging to Ishak Abubakar “M”aged 20 based on trust at Aroma Restaurant pretending to go to the School of Armour Bauchi, leaving Ishak and Salisu.

“After waiting for two hours, they moved to Awalah, close to the School of Armour. The okada man sensed danger and raised the alarm and Salisu was arrested. Further investigation led to the recovery of the other suspect with the Motorcycle, a Bajaj Boxer with Registration number MSA 335 WS”, he added.

He said that all the suspects have confessed to the crimes and will be charged to court after all investigations have been concluded.