An Emirates aircraft carrying 265 Nigerian evacuees from Dubai, United Arab Emirates (UAE) on Wednesday made an air return 60 minutes into the flight to… 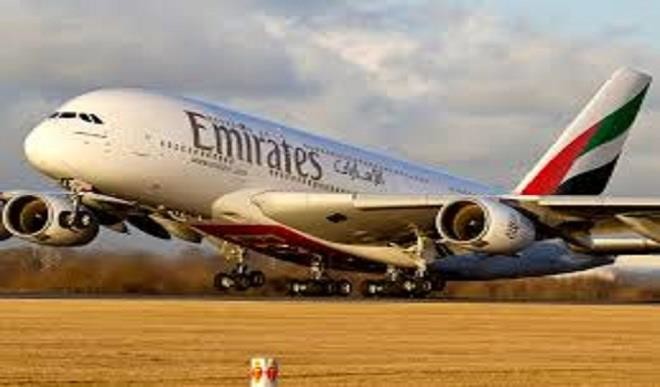 An Emirates aircraft carrying 265 Nigerian evacuees from Dubai, United Arab Emirates (UAE) on Wednesday made an air return 60 minutes into the flight to Nigeria after a female passenger gave birth on board.

It was learnt that the pilot made an air return after the woman gave birth because there was no doctor to attend to the mother and the baby.

Kafayat Amusan gave birth on board 30 minutes after departure, which resulted in the plane returning back to Dubai.
She is currently on admission at a hospital in Dubai.
The Nigerian ambassador to the UAE and staff of the Embassy are in touch with the mother and child who are said to be in good condition.
Emirates changed aircraft to fly the other 265 passengers.

Meanwhile, as the Federal Government commenced evacuation of Nigerians stranded abroad, the Airline Operators of Nigeria (AON) condemned the decision by the federal government to patronise foreign airlines for the evacuation flights.

In a statement signed by the Executive Chairman of AON, Captain Nogie Meggison, the body said that Nigerian airlines have the capacity to bring their countrymen and women back to their fatherland and expressed shock that despite the fact that Nigeria does not have the resources now due to low oil price and despite the fact that airlines are struggling to keep their workforce due to huge loss in revenues occasioned by the COVID-19 lockdown, a government agency would engage foreign airlines to evacuate Nigerians when the country has airlines that are capable of doing that.

“AON is shocked and disappointed by the decision taken by the federal government to evacuate Nigerians back to our country with foreign airlines. So we are calling for government to identify those officials who took such decision. At a time government is searching for ways to boost its revenue, some officials are giving away the country’s meagre resources.

“These foreign airlines are not going to create jobs for our teeming youths. The federal government has made a call to employers not to sack their staff in the face of the current economic crunch caused by the Coronavirus pandemic, but how can the airlines cope when the opportunity for them to make money and pay their workers were taken away and given to foreign carriers?

The Chairman of AON described the action of the officials who took the decision to engage foreign carriers to evacuate Nigerians as economic sabotage.

He said that Nigeria does not have social security like countries where sacked workers receive certain amount of money for months to cushion the effect of the sack, adding that how to kick-start the airlines after COVID-19 should be in the mind of government.

“Government is putting many of us out. Government is putting money in the airlines to support their survival and somebody is giving Nigerian jobs to outsiders. How can our airlines rejuvenate their staff without money? So we are calling that government should probe those involved in this mischief because what they have done is counterproductive.

“Our rent is running, Internet is running. It is painful for government to bring out money to support aviation and some officials will be undermining government’s efforts. Azman has Airbus A340-600, which is a wide-body aircraft, Max Air has four Boeing B747 and Air Peace has three Boeing B777. So we have the capacity to airlift these Nigerians. Just imagine how the money earned will strengthen the operations of the airlines. Each aircraft has four sets of pilots. Their action does not add up,” Meggison said.