Men have been in power for too long, it’s time for women to take over – Sowore

The presidential candidate of the African Action Congress (AAC), Omoyele Sowore, has advised women to revolt and take over power because men have ruled for… 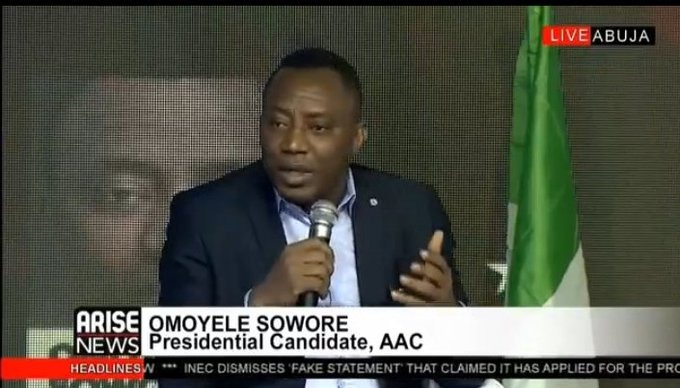 The presidential candidate of the African Action Congress (AAC), Omoyele Sowore, has advised women to revolt and take over power because men have ruled for too long in the country.

The activist stated so on Sunday during the second edition of the town-hall meeting series organized by Arise TV in collaboration with the Centre for Democracy and Development (CDD).

Sowore said women have accepted the status quo for too long and have internalized oppression despite being slightly of higher population than men in the country.

He said, “There are more women in this country who are more qualified to vote than men. When are women going to nominate a woman, vote for the person, and force your husbands to vote for a woman? That would solve this problem of equality at once.”

“Why I’m saying this is Nigeria has a ministry for women affairs. I’ve never heard a ministry of man affairs before.

“There was a time, I think in the FCT when a man was applying to be voted into a women-leader position. In Adamawa State, a commissioner for women affairs was a man.”

The AAC presidential flag-bearer further said it is unfair for women to be satisfied with the 35% allocated to them  for representation in government, adding that they should rise, revolt and demand as much as men.

“We have domesticated the idea of women discrimination and women have accepted it for too long. Let them rise up and stop accepting 35%.

“If you’re almost 51% of the population, fifty-something per cent of voters, why are you accepting 35% representation in government?

“Women have internalized this oppression for too long. Rise and stop accepting it. Revolt against it, so you can take over for sometime too. Men have been in power for too long and they’ve messed up our world – time for women to take over,” he said.