Looters take to the street as curfew drags on in Lagos

The EndSARS protest took a different turn on Wednesday when unidentified hoodlums took advantage of the curfew to loot shops and shopping mall. In a… 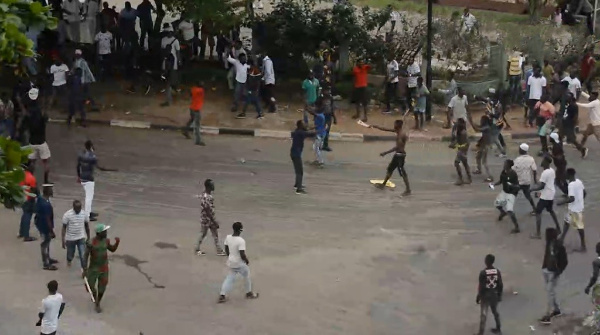 The EndSARS protest took a different turn on Wednesday when unidentified hoodlums took advantage of the curfew to loot shops and shopping mall.

In a video circulating on social media, some hoodlums looted the shoprite shopping mall at Jakande in Lekki.

They were seen running in enmasse with nothing into the premises and running out with various items.

In a related development, armed hoodlums looted various shops besides the Ecobank at Fagba bus stop near the railway.

According to residents in the area, the hoodlums were identified as “abokis” who carted away with various items such as phones, clothes and other items from various shops. They were said to have dangerous equipment for the operation. Residents of the area looked on while the looters moved from one shop to the other.

One of the residents who could not take the injustice moved closer to them and was stopped by others due to the number of the looters as well as the mercenaries they were brandishing to scare people away.

The 24-hour curfew was imposed by the state government on Tuesday in a bid to end days of anti-police protests which has so far killed dozens of lives.