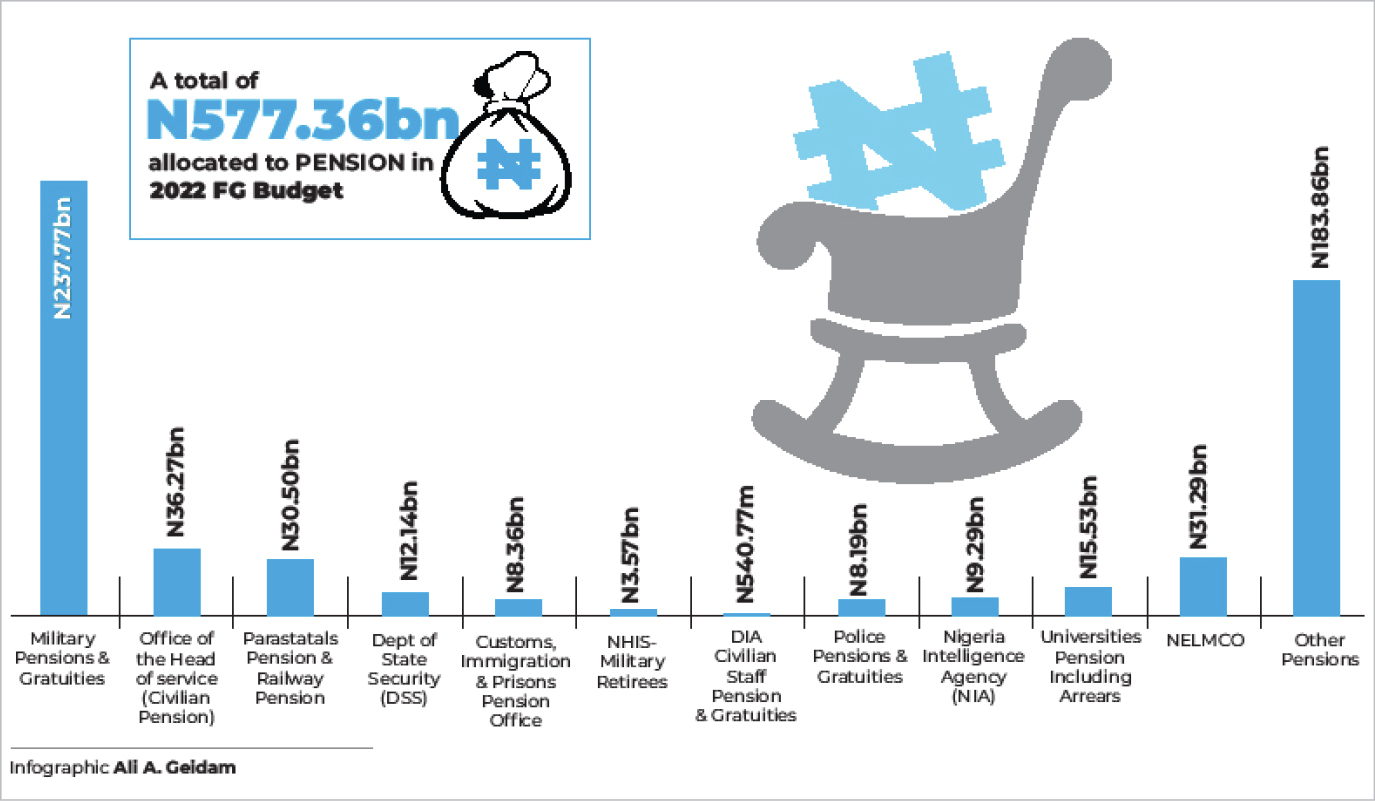 A new pension scheme which provides life pension for civil servants who have attained the status of Head of Civil Service of the Federation (HCSF) or permanent secretaries approved by President Muhammadu Buhari is rattling Nigeria’s Contributory Pension Scheme, which is currently spearheaded by the National Pension Commission (NPC), Daily Trust can report.

Prior to the Contributory Pension Scheme (CPS), Nigeria operated the defined benefit scheme in which employers bore the entire pension burden of employees on retirement. The inability of governments to meet the pension obligations of retired civil servants saw many die while still awaiting payment of their entitlements.

The federal government’s inability to meet its pension obligations led to the reforms embarked upon by the Olusegun Obasanjo administration in 2004, with the enactment of the Pension Reform Act (PRA). Under the new arrangement, the Pension Transitional Arrangement Directorate (PTAD) took over the administration of the defined benefit scheme while PenCom coordinates the newly introduced contributory pension arrangement.

With the pension reform, civil servants and the government, being their employer, make monthly contributions towards retirement and the retirees are paid their full benefits by the Pension Funds Administrators (PFAs) upon exit from service. In the pension reform guidelines, which were issued by PenCom in 2015, the head of service and perm-secs were asked to open retirement savings accounts and make pension contributions same as other pensioners.

The guidelines also stated that their benefits were already defined by law, guaranteeing that the government would pay them 100 per cent of their terminal benefits as pension upon retirement. The regulator, therefore, said the federal government, as the employer, is statutorily obligated to pay the shortfall in case the RSA savings do not cover the 100 per cent, thus alluding to the fact that they won’t lose a kobo of their entitlements.

Under the new presidential directive, however, the entire liabilities now revert to the government, with the HCSF and permanent secretaries no longer required to save towards their retirement and are now entitled to “life salaries” in the name of pension through the IPPS system.

By implication, retired heads of service and permanent secretaries were asked to close their Retirement Savings Accounts (RSAs) with the PFAs and start receiving “life salaries” through the Integrated Personnel and Payroll System (IPPS), originally designed for only active civil servants.

It was reliably gathered that the monthly salary of a serving permanent secretary is N898,000, after tax and other deductions.

It was also learnt that their monthly entitlements after retirement amount to over N1 million.

The new arrangement is, however,  generating uneasy calm in the civil service, with insiders saying problems have already started cropping up around the presidential directive, with other civil servants agitating to be exempted from the contributory pension scheme and to be placed on life salaries.

How previous legal opinion was reversed to get Buhari’s nod

The journey to alter the provision of the new pension law began late in the administration of President Goodluck Jonathan through a February 24, 2015 letter by the then HCSF, Mr Danladi Kifasi, addressed to the then Minister of Justice and Attorney-General of the Federation (AGF), Mohammed Bello Adoke. The letter sought clarification to enable the head of service and permanent secretaries to be excluded from pension regulation under Section 6(2) of the Pension Act.

The move was hinged on the argument that the top civil servants were political appointees and not employees of the federal government. It was therefore argued that, unlike other civil servants, the head of service and retiring permanent secretaries would be excluded from the contributory scheme but be placed on salaries for life, which many analysts believe will further worsen the government’s debt burden.

But in a letter sighted by Daily Trust, the AGF asked the head of service to refer to the Pension Reform Act which stipulates clearly why permanent secretaries and head of service cannot be excluded from contributory pension.

The AGF’s letter, written on March 16, 2015, with the caption “Re: Request for Clarification on the Categories of the Political Appointees Retiring with Full Benefits,” stated that “Section 173(1) of the Constitution requires that the right to earn pension and gratuity in public service shall be regulated by law”.

The justice minister added that Rule 020810 of the Public Service Rules 2008 stipulates the compulsory retirement age of all pensionable officers in the public service while concluding that the political appointees referred to in Section 6(2) of the pension law are those entitled to retirement benefits.

Consequently, the position of the former AGF entails that even though the head of service and permanent secretaries consider themselves as “political appointees”, they are bound by law to retire at the age of 60 or after having been in service for 35 years, and are therefore within the category of those whose retirement benefits should be under the regulation of PenCom.

However, the current Attorney-General of the Federation and Minister of Justice, Mr Abubakar Malami, countered the previous legal opinion by Adoke, in an April 2019 legal opinion, where he declared that the head of service and permanent secretaries are not employees but appointees of the president and that they should not be subjected to the contributory scheme as stipulated in PenCom guidelines.

In Malami’s letter, he referred to Section 3 of the PRA which established the contributory pension scheme, which covers the payment of retirement benefits for public servants of both federal, state and local governments as well as the public sector.

The AGF, however, argued that the CPS did not have universal coverage as its remit did not cover “judicial officers under Section 291 of the Constitution and members of the armed forces, intelligence and secret services of the federation”.

Riding on Malami’s legal opinion, it was understood that the ministry of finance directed that retired heads of service and permanent secretaries should be placed on “salaries for life” via the IPPS platform following President Buhari’s approval to exclude them from the contributory pension scheme and place them on life pension.

Consequently, credible sources told  that after the presidential approval, the implementation of the new scheme for permanent secretaries and head of service had commenced.

What the law says

Also, sections 2, 3, 4 and 6 of the Pension Reform Act place all federal public officers under the contributory scheme.

For instance, Section 2 subsection (1) and Section 3 subsection (2) of the Pension Reform Act clearly state that “The Scheme established applies to all employees in the public service of the federation, the Federal Capital Territory, states, local governments and the private sector.”

Similarly, Section 6 points out that the “Administration of retirement benefits of the categories of employees exempted from the scheme under Section 5 shall be subject to the supervision and regulation of the commission”.

Thus, the only exceptions by law are judicial officers, personnel of the armed forces, personnel of the intelligence and security services, as well as employees who had three or fewer years to retire as at June 25, 2004, when the scheme was launched.

As such, there is nowhere in the law that states that the head of service and permanent secretaries are exempted from the Contributory Pension Scheme.

Police, professors opt for exclusion too

As a fallout of the new pension status for top public servants, other categories of federal government workers are currently agitating for similar arrangements. Prominent among these are the officers of the Nigeria Police Force.

The NPF, despite having a pension fund administrator, the Police Pension Fund Ltd, and being regulated by PenCom, has over time sought to opt out of contributory pension.

At a public hearing conducted on the police pension earlier this year, however, those who presented papers condemned the move by the police to exit the contributory pension scheme.

Also, university academics, especially in the professorial cadre, have been agitating to exit the Contributory Pension Scheme, a move which experts have frowned at. Meanwhile, the National Pension Commission, when contacted by Daily Trust, declined comment on the matter.

A pension specialist, Mr Sani Mustapha, said Nigeria must not in any way revert to the defined benefit scheme as it was not sustainable.

Speaking to Daily Trust, he said, “Contributory pension is the future of pension, other countries (who are rich economically) provide a second layer to assist the CPS. For us to be clamouring for going back to budget-provided pension like the DBS is just prolonging the evil day!”

Mustapha said if indeed the federal government wants to exempt some officials from contributory pension, it can devise other means other than placing them on life pension.

“If you want to equate the take-home pension with the last salary, all you need to do is increase the funding of the pension account…..As per where pension payment is to be domiciled. The pension law is very clear and has identified the bodies charged with such duties,” he also said. A public affairs analyst, Mr Simon Kolawole, in his take, warned that the move to place permanent secretaries and head of service on life pension will undermine the pension reform and weaken a watershed policy in Nigeria’s history.

He said, “(For instance), the police force has been coming up with all kinds of schemes over the years to exit it. After a wave of high-level lobbying, the federal government allowed them to set up a pension fund administrator (PFA) in 2013. But they are still subject to regulation by PenCom.

“To take the funds off the eyes of PenCom, the police are lobbying yet again that they be exempted from the contributory scheme, like the armed forces. However, as I have noted, the armed forces are expressly exempted by law.

Mr Kolawole further advised President Buhari to revoke the approval or write to the National Assembly seeking an amendment to the Pension Act.

“I think there are two obvious remedial options before Buhari. One is to withdraw the directive entirely and return the head of service and permanent secretaries to the Contributory Pension Scheme before other government employees and appointees begin to develop ideas about agitating for life salaries too.

“The second option is for the president to seek an amendment to PRA 2014, Rule 020810 and the 1999 Constitution to expressly exclude the head of service and permanent secretaries from the Contributory Pension Scheme if he so desires,” he said.