Sugarcane farming is not known to many people in Kano as it is not popular among many farmers. Unlike grain farming, which dominates the various… 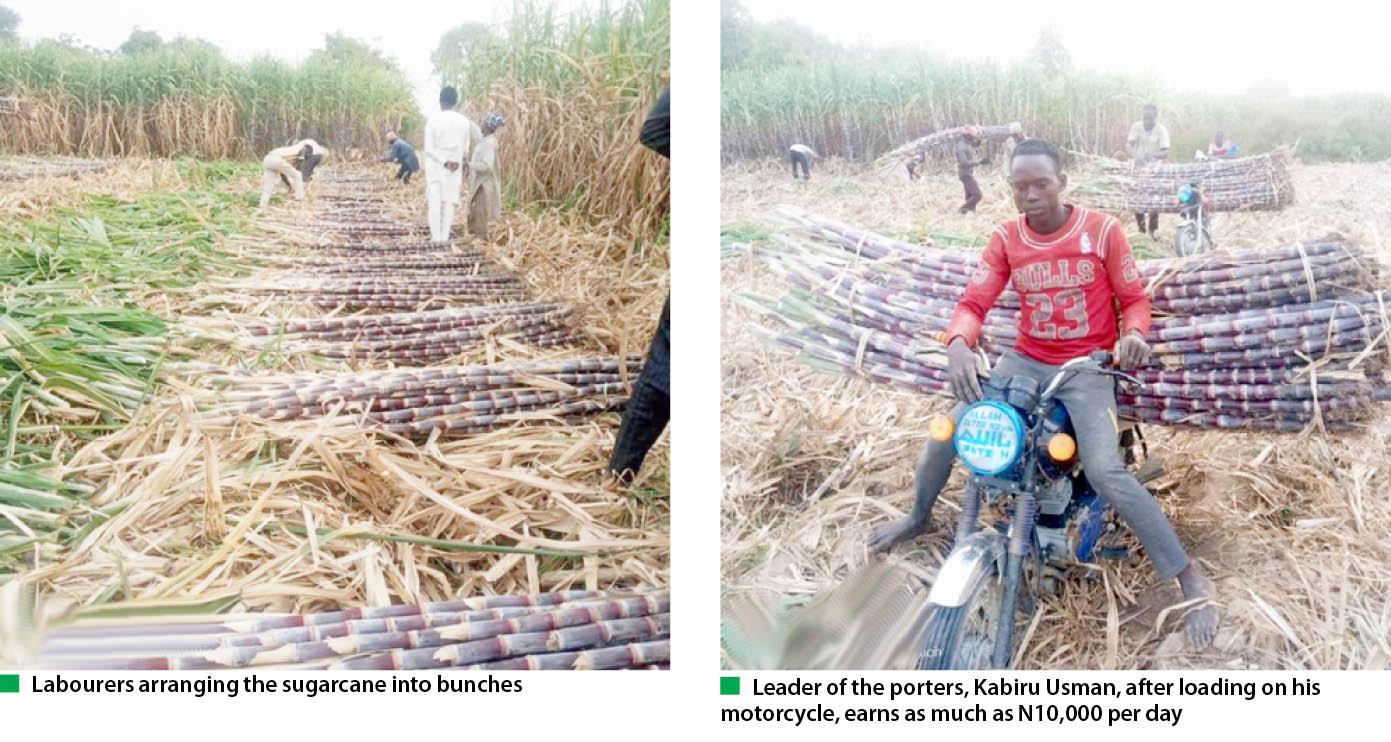 Sugarcane farming is not known to many people in Kano as it is not popular among many farmers. Unlike grain farming, which dominates the various parts of the state, sugarcane is rare and only seen in the market when it is ready for consumption or other purposes.

Daily Trust on Sunday, however, discovered that there exist some vast farmlands in the southern part of Kano where sugarcane is cultivated in bulk and transported to many parts of Kano and other states in the country. The sugarcane farms, owned by many people, are located in Gamadan town and Ruwan Kanya of both Kura and Rano local government areas of Kano.

When our correspondent visited one of the biggest sugarcane farmlands in the state belonging to the late Isiyaka Rabi’u, it was discovered that aside from remaining a huge investment sector and producing big sugarcane farmers in Kano, the place also provides for employment opportunities, on which hundreds of people depend and generate huge amounts of money.

Some of the farmers who spoke with our correspondent, described the industry as lucrative and engaging as it keeps them busy throughout the year. Although they expressed divergent views on the challenges they are facing, many of them shared success stories and the way forward for the business.

Speaking on the process of sugarcane farming, one of the major farmers, Alhaji Saidu Ibrahim Ruwan Kaya, who has spent over three decades in the business, said the planting time usually began immediately after the rainy season while harvest would normally start during the rains, making it nearly one year from planting to harvests

“Sugarcane is one of the most difficult crops to farm as it will take up to 11 to 12 months on the ground. And throughout that period it will be consuming your money through watering, fertiliser and other processes. Immediately after the rains, just like this period, we are already planting, and the procedure continues until next year when we will harvest,” he said.

According to him, if one wants to get more profit from his sugarcane it should be allowed in the farm for 12 months, otherwise it will not grow big and sweet enough to generate money and attract buyers.

On the process of marketing sugarcane, the farmer said it was entirely different from the way other crops are marketed. He said their job was to produce up to harvest level, and from there, the buyers, who are mostly dealers, will buy, harvest and take to various markets.

“Unlike other crops where you have to harvest and put them inside sacks and take to market or stores, in sugarcane we don’t do that. The dealers will come to the farms at a time like this when the crops reach harvest period. They will go round and check, negotiate and buy per stand. Each stand has about 20 pieces of sugarcane and they will count it and pay us our money,” he said.

Alhaji Ibrahim further said the price ranged from N500 to N700 per stand, and to count the number of stands in one farm is difficult, but in a day they could harvest at least 250 bunches, which are usually sold between N3,000 and N4,000.

“In this region, we don’t count sugarcane in hectares, we call it tsagi, that is row. And in one row we can get 240 bunch and this farm has over 50 rows. The labourers hardly go beyond one row in a day, so they gather only 250 per day. If you calculate it at N3,000 per bunch, then in a day we sell sugarcane of about N750,000. A big truck can carry the whole 250 bunches, but small ones normally carry 110,” he explained.

He added that the buyers were also in their town while others came from neighbouring sugarcane markets, adding that they normally supply to Maigatari market in Jigawa, which is a border town to the Republic of Niger, as well as Gombe and other states.

“We have more than 50 large farmers of sugarcane in this farm only, and each can get up to 50 trucks in each harvest. It belongs to the Isiaka Rabiu University. What we normally do is to mark the area we want and pay them, then continue with our work,” he said.

On the other hand, the major dealer said although they were facing challenges in the business, they thank God as they rely solely on it and even making others to become rich through the business. He said the only challenge was the cost of fertiliser and large distance between their farm areas and water, which adds to their spending.

Other categories of people earning from sugarcane farms are drivers who transport the goods to markets, porters who carry on their motorcycles from the farm to the locations where vehicles are parked, and those packaging the sugarcane and putting it into bunches.

One of those working to assemble the sugarcane into bunches, Idris Musa Gamadan, said he was born in the sugarcane business because his father was also a sugarcane farmer until his death. He said that with the business, which he started since childhood, he could manage all the affairs of his life and family.

According to him, although he has a sugarcane farm in Gamadan town, every season he has to come to Ruwan Kanya and work for big farmers to earn a living. He said it normally took them up to six months to harvest as the place is large.

“Every year I come here to work as a labourer because my farm is not as big as this and cannot cater for my daily needs. This village has the largest sugarcane farmers in Kano. We are eight in our group and we get N120 per bunch as our fee, which is N30,000. Everyone of us goes home with almost N4,000 in a day. There are other groups too, and as you can see, they are working hin other farms,” he said.

Kabiru Usman, a leader of those who transport sugarcane from the farms to the parking space where it is loaded on vehicles to the markets, said their members comprised of over 50 people, and each with his motorcycle earned more than a means of just eating but sustaining their entire life, as they can get up to N10,000 in a day as they normally carry 8 to 10 bunches per load.

“This has been our business for a long time. We work for six months carrying sugarcane from the farms, and when it finishes we go back to our petty businesses. The only thing you need is the motorcycle. I started with a N100, 000 bike but now, I bought a new one worth N350,000 and with a lot of savings. I urge the youth in this town to join us as it is paying and better than staying idle.

He said their major challenge was passing through the bush due to the bad situation of the road. He added that every year they contribute money to buy sand and fill some of the holes to make movement easier.