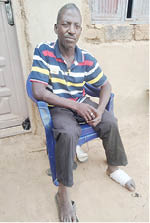 Communities in Anguwan Kano village, Barakallahu, Igabi Local Government Area of Kaduna State are worried over the continuous harassment by the Nigeria Air Force (NAF) in Kaduna over claims that the land the community is situated on belongs to the service.

Daily Trust recalls that there has been a long-standing battle between the Barakalahu community which is about five kilometres away from Kaduna main town, along the Kaduna-Zaria Road and the NAF since 2006.

The Anguwan Kano community, made up of predominantly Gbagi natives is said to have lived in the community for over a 100 years, ever before the establishment of the Nigerian Air Force (NAF) 58 years ago.

Our correspondent gathered that the lingering land dispute between has forced many people to relocate from the community for fear of getting their land titles revoked and houses demolished.

Several interventions have been sought by the community, including taking the NAF to court, a case which the community won at a Kaduna State High Court in 2020 and the NAF was asked to pay N5 million general damages for trespassing into the 74.436 hectares of land belonging to the community. The NAF had appealed the matter.

The NAF, however, claims the whole of Barakallahu belongs to the Service as indicated on a service map shown to Daily Trust correspondent in 2012 by the then Air Officer Commanding, NAF Training Command Kaduna, Air Vice Marshal Christopher Okeke.

“I can confidently tell you that the land Barakallahu community is located belongs to the NAF. We have a map as well as several beacons located within and around the community,” Air Vice Marshal Christopher Okeke said.

However, the recent incident that occurred last Saturday, where a man identified as Danjuma Adamu, his son, Jafet Danjuma and an unidentified woman were allegedly shot by personnel of the Air Force for resisting the demolition of a two-bedroom flat belonging to the family has forced the community to come out again a fight for their land.

Daily Trust reports that Saturday’s incident caused angry youths and women from the community to block the Kaduna-Zaria expressway in protest, leaving travellers stranded for about an hour.

Our correspondent gathered that NAF operatives and men of Operation Yaki went to the area around 8am on October 22, 2022 to demolish an uncompleted two-bedroom building.

It was further gathered that by the time the villagers returned home after being alerted by neighbours, the whole structure had been demolished.

Narrating his experience, one of the victims and brother to the owner of the demolished structure, Danjuma Adamu, who was shot in the foot said, “On my way back from my farm, I noticed that the new building being erected had been marked with red paint and when I inquired, I was told that soldiers were responsible for the marking.

“On getting this information, I and some other members of the community went to speak to the soldiers who were demolishing a building belonging to my brother, they refused to listen to us, or offer any explanation on why they were marking and demolishing our structures.

He said, they did not stop at that, but took away his two children, Promise and Evelyn, to an unknown destination.

Danjuma, 45, said he was born in the community which was founded by their grandparents over 100 years ago and called on the government to intervene so that they do not loss their ancestral land.

On why the community resorts to blocking the Kaduna-Zaria highway over the matter, he said, “There is no way that you will beat someone and ask him not to cry, our reason for blocking the road is to create awareness and seek for intervention on our plight because we feel that is the only way the issue can be resolved.”

A member of the community, Ruth Musa, who said she was beaten by the soldiers, told our correspondent that she stopped them from taking away their village head saying, “I stood and told them I will not allow them take our children and the village head, they shot twice into the air before they shot at our son who is treating his fractured thigh from the bullet wound.”

Monica Isaiah Dogonyaro, who was also beaten by the soldiers, said she would not sit back and allow their inheritance be taken away by the NAF.

“The soldiers came in three vehicles and beat us just because we have refused to allow them take our land. The boundary between us is the river, but the NAF has since crossed over from the boundary and we have been faced with series of harassment and intimidation.”

The widow lamented that a girl, who came to greet them was also shot. “We did not know she would survive, but we thank God she did. We are widows and our husbands left this property for us.”

She called on the government to look into the matter and find a lasting solution to what they described as a problem that has refused to end.

Adding her voice, the oldest woman in the community, Lami Adamu, said her father was the first person to come to the community. “All these people you see here are his grandchildren, great grandchildren and the rest, we are all one family.

Lami, who said she was over 100 years old, lamented the manner with which the soldiers have continuously caused pain and hardship to the community.

The Commander, 453 Base Service Group, NAF Base, Kaduna, Air Commodore Adedoyin Ademuyiwa, and the NAF Public Relations Officer in Kaduna, Group Captain Ibrahim Bukar, said they were not authorised to comment on the matter and referred our correspondent to the Director of Public Relations and Information (DOPRI) in Abuja.

But a reliable source within the base community, who confided in Daily Trust, said the incident could not have been unconnected to the recent security breaches some military formations have experienced.

“There was an arrangement between the community and the NAF that they would not build any new structure and they agreed only for us to see new buildings spring up in the community.

“With the recent upsurge on military formations across the country, stringent precautions have to be taken to secure the base, unfortunately, members of the community became violent and the whole situation took another dimension,” the source said.