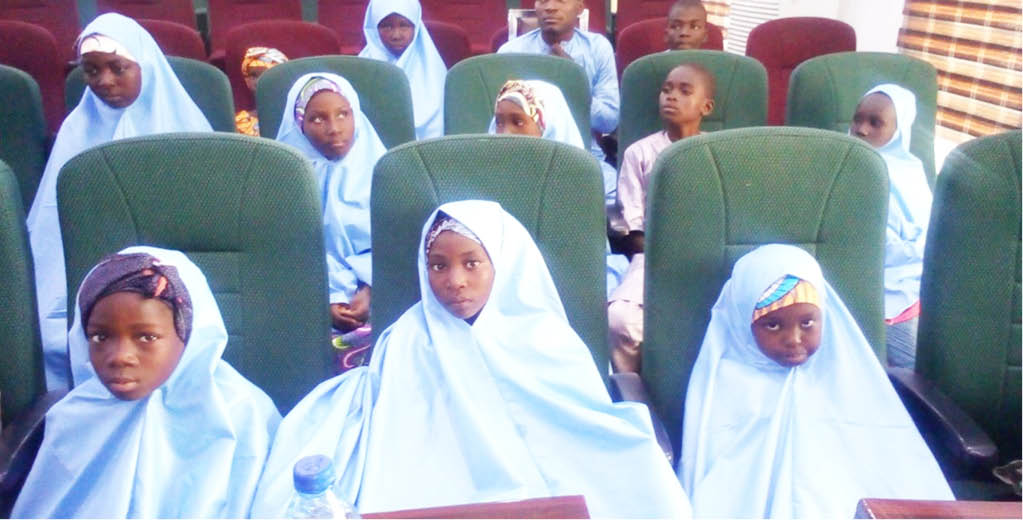 Tegina children while being received by Governor Sani Bello

By Abubakar Akote and Lami Sadiq

It was tears of joy for parents Friday as 90 children kidnapped from the Salihu Tanko Islamic School, Tegina, Niger State reunited with their parents after spending over 80 days in captivity.

However,  a couple whose son died in captivity said they would remain in pain for long as they had been longing to see their child since the day he and his peers were abducted by bandits.

It was a moment of wailing when it dawned on them that they would never see their son again. This was when other parents and siblings met with their released loved ones in Minna on Friday.

The children were kidnapped late May and had been in captivity for 88 days until Thursday when they were released after payment of ransom.

The Tegina pupils were released barely five days after the students of Bethel Baptists School, Kaduna were freed.

The father of the child who lost his life in the bandits’ den, Idris Umar, described the experience as traumatic.

He said it was the darkest moment of his life as his long expectation of reuniting with his son like the other parents was dashed.

“It was a traumatic experience I can’t wish even my enemy.  It was terrible for me and all of us as parents in Tegina,” he said.

According to one of the girls, the deceased died 24 days after their abduction.

Similarly, a 9-year-old Maryam, whose parents died shortly after her abduction, was in pain and grief yesterday. She wept profusely and could not be consoled by sympathisers while the other pupils were being reunited with their parents.

Some of the children who spoke with our correspondent narrated their ordeals in captivity.

A female student, Zuwaira Isah, said they trekked for four days in the bush before reaching their final destination.

“Sometime they carried small children among us on bike. It wasn’t an easy experience. And they used to wake us in the night. When we arrived their den at the initial time, they used to beat us, but the gang leader told them to stop,” she said.

She, however, said they were fairly fed with rice, pap and other types of food three times a day, depending on what was available.

“They gave us food three times a day. In the morning we took pap while they gave us rice or any other available food for lunch and dinner. They also gave us drugs and injections when we fell sick. They called one of them doctor. He was the one looking after the sick ones among us,” she narrated.

She said the grown up ones among them were obliged to look after the younger ones and served as their parents to make them feel comfortable.

She also said the abductors always encouraged them to prayer five times a day.

One of the girls said they lost the hope of ever being reunited with their parents.

“Although they didn’t beat us, we never thought we would see our parents again. But we are happy to be back today,” she said.

Parents of one of the pupils expressed gratitude to God for the safe return of their children.

“We thank Allah (SWT) for making us see this beautiful Friday. It is a special Friday for us. We have been crying day and night. But Allah has turned our cries to joy today,” she said.

Another parent, Hauwa Hamza, who spoke in Hausa, said they would now go to sleep in peace, while praising Allah for giving them another opportunity to see their children.

Some of the parents who spoke with our correspondent said the incident would not stop them from sending their children to school.

The head teacher of the school, Alhaji Abubakar Alhassan, who couldn’t hide his joy, said he appreciated those involved in the struggle.

“Many people have contributed to their release, including the government and individuals. It is an Islamic school, but even Christians, churches and pastors contributed. They prayed for us to secure their release,” he said.

Speaking to our correspondent, the chairman of Rafi Local Government, Modibbo Ibrahim, who said he was also an uncle to the boy who died in captivity, said it was a tough experience for his people, but thanked Allah for the successful release of the children.

“We are now into synergy with traditional rulers to prevent the recurrence of this incident. But we cannot reveal other strategies to the media because their informants are around,” he said.

Receiving the children, Governor Abubakar Sani Bello said out of the 91 of them kidnapped on May 30, 2021; 90 were released while one died in captivity.

“I would like to congratulate each and every one of us that has contributed in whatever means towards the release of these innocent children. This goes to show the sickness or madness in the heads of some people. I cannot explain or imagine why you abduct an innocent three-year-old and keep him or her for over 80 days,” he said.

He said all the children were medically examined and 86 found medically alright while four others were found to have health challenges.

Similarly, the abducted students of the College of Agriculture and Animal Science, Bakura, Zamfara State, have also regained their freedom, 12 days after gunmen whisked them away from the institution.

While addressing them shortly after their release, Governor Bello Matawalle said, “Today, based on our dialogue and reconciliation, we used the repentant bandits to secure the release of these students.

“They worked hard for almost 10 days. They were out day and night to make sure they convinced those criminals to release the students and their teachers. Alhamdulillah, today they are in our midst.”

The students were brought to the Government House in Gusau in a bus, amidst heavy security. They were received by the governor and top officials of the state.

Gunmen had stormed the institution around 11pm on August 15 and kidnapped 20 people – 15 students, four staff members and a driver.

During the attack, the gunmen killed two watchmen and a police officer.

Days later, the abductors demanded N350 million for the release of the students.

Upon receiving the students on Friday, Governor Matawalle said no ransom was paid for their release.

Meanwhile, the governor has ordered the closure of all the major markets in the state. He also ordered that all filling stations in local areas be shut down, adding that there should be no selling of fuel, even in jerry cans.

Also, bandits have released an additional 32 students of Bethel Baptist High School in Kaduna, one week after 15 of the students were released and reunited with their families.

With the latest release, the Christian Association of Nigeria (CAN) in Kaduna State says 31 students are still in captivity and urged Nigerians to continue to pray for their safe release.

The Kaduna State CAN Chairman, Rev. Joseph Joh Hayab while confirming the release of the 32 students said they were released on Friday evening and are being reunited with their families.

Hayab thanked Nigerians for their support and called for more prayers for the release of the remaining students.

Daily Trust reports that 15 of the students had been released last week with a promise by the bandits to release the remaining in batches.

Bandits had on July 5th breached the school’s security located at Damishi in Chikun local government area of Kaduna State and abducted about 121 students. So far, at least 90 of the students have been released with over N50 million paid to the bandits as ransom.