I’ve proven that not all Politicians Are Liars — Akeredolu

The Governor of Ondo State, Oluwarotimi Akeredolu, SAN, has said that he has proven that not all politicians are liars. He also said if re-elected… 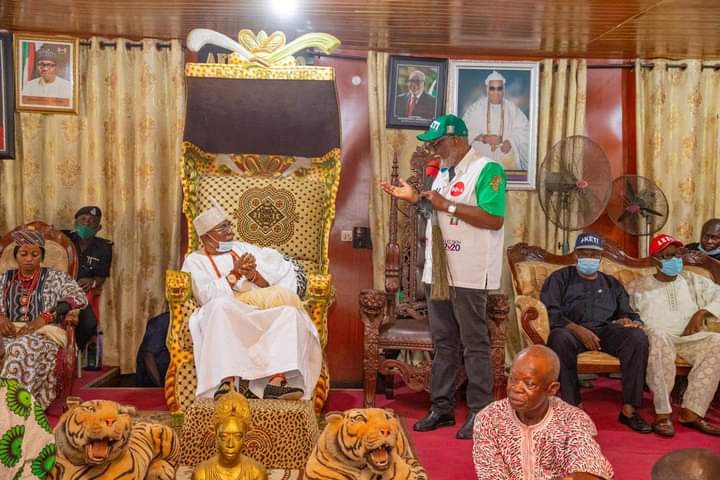 The Governor of Ondo State, Oluwarotimi Akeredolu, SAN, has said that he has proven that not all politicians are liars.

He also said if re-elected for another term, Akure, the state capital, will be connected to the global economy.

In a similar vein, the Deji of Akure and Paramount Ruler of Akure Kingdom, Oba Ogunlade Aladetoyinbo Aladelusi described the Governor as a noiseless achiever, saying, “I never knew he could perform meritoriously as he did despite the bogus debts he inherited from his predecessor”.

Oba Aladelusi also described Akeredolu as a man that is too frank and sincere for the political system that operates in Nigeria, adding that “a straightforward man like you can only be encouraged by what tomorrow will say about your today”.

Speaking when he played host to the Governor and his campaign team in his palace on Tuesday, the monarch said Akeredolu has fulfilled his promises to the people of Akure kingdom, adding that “whoever says Governor Akeredolu has not performed, particularly in Akure would only be lying on what is visible.”

“When Governor Akeredolu assumed office amidst inherited debts running into billions, many people thought he wouldn’t perform. I wrote him off myself because he inherited a scaring debt. He inherited six months of unpaid salaries but today, he has almost completely paid all the arrears.

“I want to say without any fear or favour that our Governor is too honest, frank and  straightforward for the Nigerian political environment. People like you only work for tomorrow, not today.

“Anyone that says Mr.Talk and Do didn’t perform in Akure is only lying. His work is all over the places. I never knew he could do much. But to my surprise, what he has done is even more than what those who met surplus did.

“Anyone that loves Akure and believes in Akure, I will always love. Mr. Governor is the architect of modern Akure. Our hospital that has been long abandoned is now wearing a new look courtesy of this Talk and Do Governor. He’s almost dualizing the whole of Akure. Aketi has done very well and he has appointed our people into government,” the monarch said.

In his remarks, Akeredolu said he didn’t join politics to maximise wealth but to show that not all political actors are liars, hence, his resolve to always do what is right, and not what is good.

“You have convinced me beyond any doubt, that you love this Akure. You made a case that for many years at the federal level, Akure has nothing. But today, we are happy that the minister from Ondo State is from Akure.

“We thank You. Akure is our state capital. And it is important that we work here. And we will do more. We have a college of medicine here. We are building a 500-bed hospital in Akure. Please support us to continue this work.

“By the grace of God, Akure will be connected to the global economy before I leave government. I want to prove that not all politicians are liars and I have proven that. I will never betray my belief. I will continue to do what is right, and not what is good. Like I do say, I want history to be kind to me.

“By the grace of God, Akure has been designed to be connected to global economy and we will do that. Akure airport is already designated as an international cargo airport. That will soon happen. We will construct Igbatoro road. Akure will be more modernised in our second term,” Akeredolu said.

In the entourage of the Governor were the immediate past Governor of Ogun State and Senator representing Ogun Central Senatorial District, Ibikunle Amosun, Minister of State for Niger Delta Affairs, Senator Donald Tayo Alasoadura, Niyi Akintola SAN, Director-General of the Akeredolu/Aiyedatiwa Campaign Organisation, Rt. Hon. Victor Olabimtan, among others.