With 90 days to the February 25, 2023 presidential election, the four major contenders for the race–Atiku Abubakar of the Peoples Democratic Party (PDP), Bola… 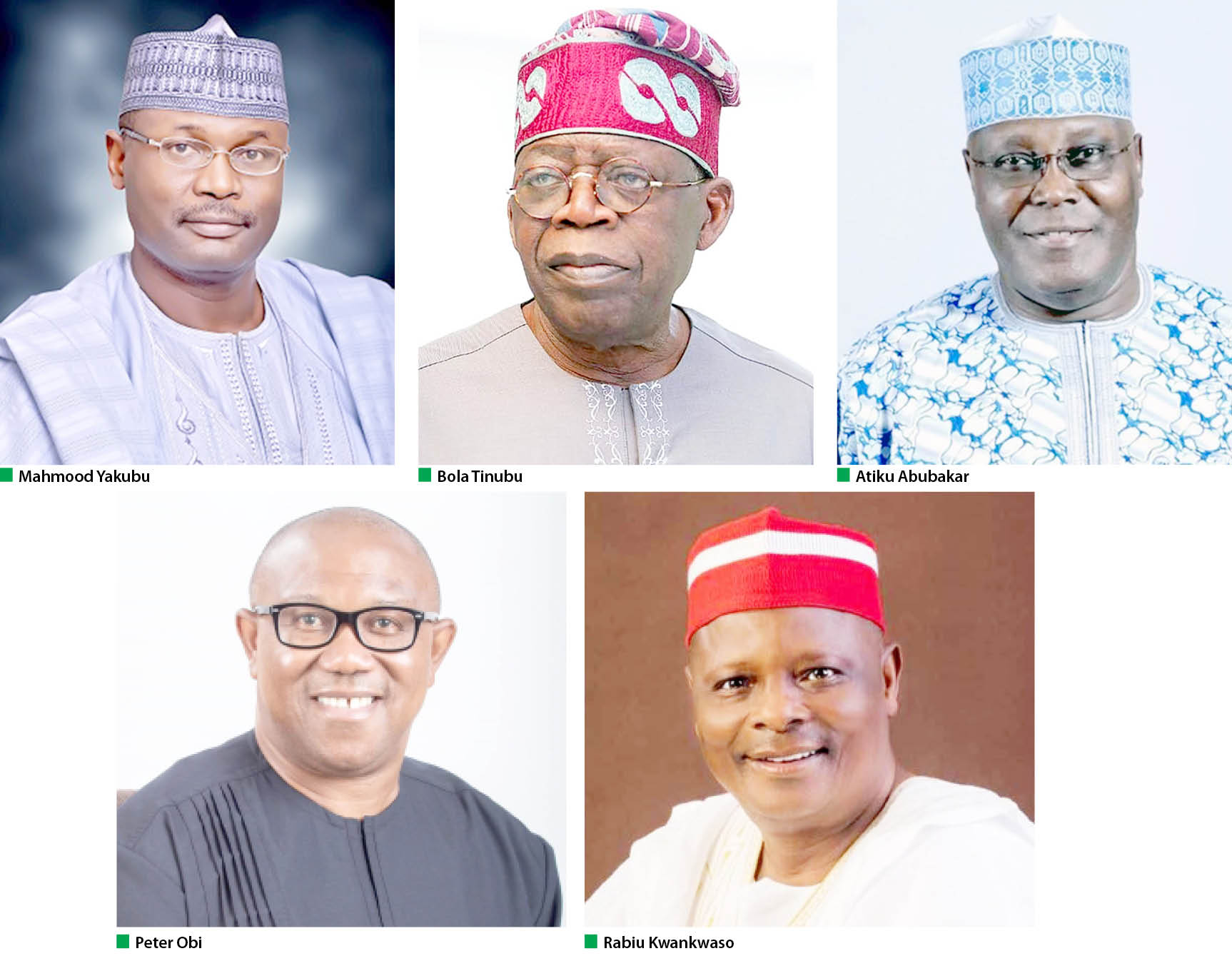 With 90 days to the February 25, 2023 presidential election, the four major contenders for the race–Atiku Abubakar of the Peoples Democratic Party (PDP), Bola Ahmed Tinubu of the All Progressives Congress (APC), Rabiu Musa Kwankwaso of the New Nigeria Peoples Party (NNPP) and Peter Obi of the Labour Party (LP)–have intensified moves to win Kano, Lagos and Rivers States.

The three states, Daily Trust on Sunday reports, are considered battlegrounds as they account for 16.5 million of the 96.2 million registered voters, according to the statistics released by the Independent National Electoral Commission (INEC).

A total of 18 candidates have been cleared for the presidential race, but the pendulum seems to be swinging to the candidates of the PDP, APC, NNPP and LP.

Analysts said the candidates must penetrate the three states to win the 2023 presidential election. They said Lagos, Kano and Rivers States were critical and strategic in the country’s presidential poll.

7m votes for grab in Lagos

In Lagos, the ruling APC and the PDP have renewed their rivalry ahead of the 2023 elections with the opposition vowing to defeat the incumbent.

Although President Muhammadu Buhari won the presidential election in Lagos State by defeating his rival, PDP’s Atiku Abubakar with a 132,798 vote margin in 2019, the APC has promised to consolidate on the 2019 victory and even deliver more votes in 2023 for its presidential candidate.

For the APC in Lagos, this is a battle to finish as this is the first time Tinubu would be on the ballot as a presidential candidate.

To millions of his followers in the state, winning the presidential election will be like an icing on the cake.

Since 1999, the PDP has, to no avail, made several attempts to control Lagos State. Will the opposition party make a difference in 2023?

Amidst the frosty relationship among PDP chieftains, with some working at cross purposes, especially after the primary that produced Abdul-Azeez Olajide Adediran, popularly known as Jandor, the PDP has vowed to deliver the state for Atiku.

While the former deputy national chairman of the party, Chief Bode George, has aligned with the G-5 Group led by Governor Nyesom Wike of Rivers State, other PDP leaders in the state have pledged their support for Atiku through a rally tagged ‘Umbrella Walk for Atiku’.  The rally brought together many leaders of the party.

But the Obi factor in Lagos cannot be wished away. In fact, analysts said this had made prediction of the outcome of the election difficult, considering that Obi also has many supporters in Lagos and the South West.

The Labour Party governorship candidate in Lagos, Gbadebo Rhodes-Vivour, who joined the party after losing his bid to become the running mate to Jandor, has taken the gospel of ‘Obidients’ to his supporters. He is also hoping to leverage on the popularity of Obi to win the election.

The APC has set up a 103-campaign council headed by the governor, Babajide Sanwo-Olu; while Senator Ganiyu Solomon, is the Director-General. The Governor’s Advisory Council (GAC) has set up a team to deliver five million votes to Tinubu, saying this is payback time for him.

A professor of Political Science, Lagos State University, Sylvester Odion, said the Obi factor had made the 2023 presidential contest unpredictable.

In a chat with Daily Trust on Sunday he said: “Obi, who is under the Labour Party, enjoys mass followership, and when you look at the population census in Lagos, the Igbo are a sizable chunk.

“If they vote according to their ethnic inclination, it would mean that they are going to share Lagos between Tinubu and the PDP.

“And for Rivers, the same scenario will play out; and one cannot rule out the Wike factor. Wike seems to have Rivers wrapped under his palm. If his control is anything to go by, it means, therefore, that whoever Wike supports would carry the day in Rivers.”

The race for Kano’s 5.9 million votes

In Kano, the ruling APC is hoping for a repeat of the goodwill it has enjoyed there since 2015 when the state gave a total of 1.9 million votes to the then APC presidential candidate, Muhammadu Buhari, which represented about 12.5 per cent of the total 15.4m votes the APC got in the election.

Although the figures reduced in 2019, the party still won the state with a substantial margin against the major opposition party, the PDP.

However, since the defection of former Governor Rabiu Musa Kwankwaso from PDP to NNPP and his emergence as the party’s presidential candidate, the permutations as to which party will have a good outing in Kano have also become more complex.

Kano, which has the second highest registered voters, according to INEC, with over 5.9m voters, is a strategic state that every leading presidential candidate hopes to win; and if not, at least, secure at least 25 per cent of the total votes cast.

In August, Atiku was in Kano where he received a former governor of the state, Ibrahim Shekarau, to the PDP from the NNPP. For three days, the top shots of the PDP relocated to the state and consulted with both high and low in the state.

Some of the PDP bigwigs in Atiku’s company included his running mate and governor of Delta State, Senator Ifeanyi Okowa; former Vice President Namadi Sambo, the party’s national chairman, Senator Iyorchia Ayu and the chairman of its Board of Trustees, Senator Walid Jibrin as well as the governors of Sokoto and Taraba States, Aminu Waziri Tambuwal and Darius Ishaku.

Daily Trust on Sunday reports that Atiku’s trip to the state and the defection of Shekarau to PDP has ‘enlivened’ the party which was hitherto enmeshed in crisis.

For the APC, its presidential candidate probably recognised the importance of Kano earlier than other candidates as he started consultations in 2020. His recent three-day interactive meetings with different religious, political, traditional, business and social groups in the state, where he and Governor Abdullahi Ganduje, got the commitment of majority of the groups, has been seen by political analysts as a deft move to winning the state.

Most recently, Ganduje, while inaugurating the campaign council of the APC, revealed that the party would adopt two strategies. One, he said, would be for members of the campaign council, spending nights in some local areas, to engage the people of the state. The other strategy, he said, was the set-up of a high-powered committee of women who would visit female voters in all the nooks and crannies of the state to sell the APC manifesto and programmes to them.

Analysts believe the NNPP stands a stronger chance of winning Kano because the party and its leader appeal to the youth. A member of the party, who asked not to be named, said all the members of the party had taken it upon themselves to provide the finances and logistics the party would need throughout the campaign period.

The party was also buoyed recently by the defection of major leaders of the APC to its fold, including a former legislative aide to President Buhari, Kawu Sumaila; a former speaker of the State Assembly, Alhassan Rurum and a former federal lawmaker, Abdulmumin Jibrin Kofa, all of whom are from the Kano South Senatorial District.

The Labour Party’s presidential candidate, Peter Obi, has visited Kano twice, and on both occasions met with traditional rulers as a move seen to be aimed at widening his acceptability in the state. However, at the moment, Obi’s strength, according to observers, mainly lies within the Sabon Gari area of the state, populated by non-indigenes.

There are insinuations that the struggle for Kano’s votes will become more frenzy because of the perceived bloc votes hitherto dedicated to President Buhari, who is no longer on the ballot.

While those in the camp of Kwankwaso believe their leader will automatically ‘inherit’ the bloc votes, APC members believe that Buhari will deliver the bloc votes in Kano to Tinubu.

Why Kano is strategic – Fage

Commenting, Professor Kamilu Sani Fage of Bayero University, Kano (BUK), said Kano had always been a strategic state for anyone contesting for the presidency because of its population and voters’ turnout in the past elections.

He said because President Buhari, who had enjoyed unrivalled success in Kano since 2003, may not have the “clout” he used to enjoy, especially since he is no longer on the ballot and the perceived poor performance of the party at the federal and state level.

This, he maintained, had given room for all the candidates to harbor the hope of getting something out of the so-called traditional Buhari bloc votes in Kano State.

“One thing that will work against the APC is that it is in power and people are not generally happy with its performance. And for the Buhari votes, many people are disenchanted with him and the party in general, so it may not be a bloc vote as it used to be. So, it will be a major political gamble to think that because Kwankwaso will chip into PDP’s votes in the North, they (APC) will have a smooth sail. They have to work for it,” Fage added.

The internal wrangling rocking the PDP and the APC in Rivers State, analysts say, is working in favour of the presidential candidate of the LP, Obi.

Our correspondent in Rivers State reports that Governor Nyesom Wike’s G-5 feud with Atiku has affected the kick-off of the PDP presidential campaign in the state.

The crisis rocking the PDP revolves around Wike and four other governors, who are members of the party. Spirited efforts by various organs of the PDP to resolve the crisis have yielded no results as Wike’s camp has insisted on the removal of the national chairman of the party, Iyorchia Ayu. Wike recently pledged to provide logistics support to Obi and Kwankwaso, and has frustrated every move by Atiku’s supporters in the state, including a former transportation minister, Abiye Sekibo and others, from campaigning for Atiku.

Daily Trust on Sunday reports that while the PDP and the APC are battling with internal wrangling, supporters of Obi in the state have intensified efforts to campaign for their candidate.

Posters and billboards of Obi are very visible in all the nooks and crannies of the state. His supporters are holding rallies and have embarked on a door-to-door campaign for the Labour party presidential candidate.