The Nigerian Correctional Service (NCoS) has said that over 1, 200 out of the 1, 844 inmates, who escaped from the Owerri custodial centre following… 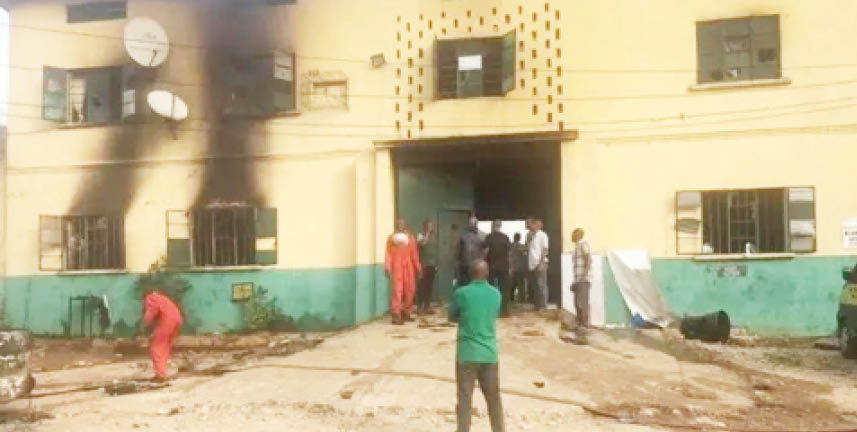 The Nigerian Correctional Service (NCoS) has said that over 1, 200 out of the 1, 844 inmates, who escaped from the Owerri custodial centre following the April 5 attack on the facility by gunmen, are still at large.

The Public Relations Officer of the centre, Goodluck Uboegbulam, told our correspondent in an interview that only about 600 of them have either voluntarily returned or rearrested by the security operatives.

He said that since the attack, the centre had intensified efforts in ensuring that the fleeing inmates were re-arrested and to prevent future recurrence.

He implored the general public to give useful information that would aid the centre in re-arresting the fleeing inmates.

Uboegbulam said, “As it stands, over 1, 200 out of the 1844 fleeing inmates from our custody are still at large.

“After the attack, we have undertaken several measures, such as going through different media and exploring possible avenues aimed at getting results.

“In fact, we have gone as far as writing to the churches, community and village heads, letting them know the dangers in allowing the fleeing inmates to hide within our communities.

“And with this, what it has yielded so far is the voluntary return of some of these fleeing inmates.”

He added, “But one irony is that most of the families and parents of these fleeing inmates don’t understand the implications of what we are saying.

“Some of them say ‘Oh! thank God, finally our sons have been set free’ but the price of that freedom is such that, that individual can not work anywhere, cannot do any job, can not open a shop anywhere because he is a fugitive.

“So, that is why we are still using every available medium to appeal to public-spirited individuals, groups, churches and village heads to help us out. This is because all these fleeing inmates, all hail from our communities.

“We or the police cannot do it all alone. We need the support and cooperation of the people. We are appealing to the public to avail us of every information that will lead to re-arresting them.”

He also guaranteed the safety and a conducive environment for the inmates, saying that the recent signing into law of the Correctional Act 2019, would help in tackling the issue of congestion of the prison custody, which, according to him, was overcrowded prior to the attack.