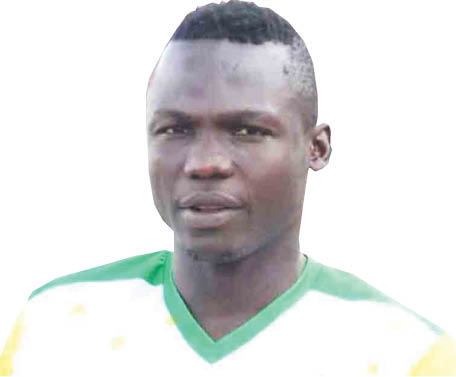 A former Plateau United leading goal scorer, Ibrahim Mustapha in this telephone interview with Trust Sports, the former El-kanemi Warriors and Enyimba FC striker spoke on his mission in his new club and Super Eagles ambition.

How happy are you with your recent move to the United Arab Emirates?

To be honest with you, I am very happy and I want to thank almighty God for making this possible.

This is a positive move and I am sure it will help lift my career.

Why did you choose United Arab Emirate instead of Europe, where every young player aspires to go?

Honestly, I didn’t choose to go to my present club.

As a matter of fact, God chose the United Arab Emirates for me.

I had so many offers in Europe but I put everything in prayer.

It was after my prayers that God decided I should first go to UAE.

I always surrender to God’s decisions because he is all-knowing.

What’s the duration of your contract and what is your mission in Dibba Al-Hisn Sports Club?

I signed a one year contract and my mission in the club is simple and clear.

I am in UAE to score goals.

Before the Nigerian league was cancelled, I was the second-highest goal scorer and I was going to overtake Israel Abia of Enugu Rangers who had 11 goals.

So as a proven goalscorer, I will score goals to lift my new club to higher levels.

How are you coping with the challenges in Dibba Al-Hisn?

It may interest you to know that everything is moving smoothly for me. I have settled down since and rearing to go.

It is as if I am one of the old players in the club. My teammates are really friendly.

They have accepted me without reservations, so I am feeling very much at home.

The weather too is okay, so there is really no serious challenge.

Are you saying you also eel at home there when it to food?

(Laughs) Food too is not a serious problem because everywhere I go, once there is spaghetti, talk don finish.

What do you like most about your new club?

Honestly, I will say there is true professionalism here.

The management is top-notch, the technical crew members are knowledgeable in the game and facilities are of a high standard.

I am experiencing an entirely new life in football.

Considering that Super Eagles coaches give preference to players based in Europe, would you say you have made the right decision by going to UAE?

I am comfortable with the choice I have made because it is not possible for everyone to play in Europe at the same time.

I believe every coach wants the best players in his team, so if I do well in UAE, I don’t think I will be denied a chance to play in the Super Eagles simply because I am not in Europe.

Super Eagles captain Ahmed Musa is not playing in Europe.

He is in Saudi Arabia.

So I believe my chances of playing for the Super Eagles are still bright.

Are you ruling out a move to Europe in future?

Not at all, I will still play in Europe if that is God’s plan for me.

Like I said earlier before I joined Dibba Al-Hisn, I had many offers from Europe.

If the same God who said I should choose my present club decides that I should go to Europe, I will obey Him.

Do you miss your former club, Plateau United?

I miss Plateau United so much because we were a united family.

There was mutual respect for one another in the club. Secondly, Plateau United played a significant role in my career.

So even as I am not physically there, my spirit is always with them.

I still call to know what is going on in the club.

I miss my friends and fans of the club.

Asides Plateau United, what else do you miss about Nigeria?

I will say I miss my immediate family, they are my backbone.

They mean so much to me. As you are aware, my father who is also my role model has been playing important roles in my career.

As a former footballer, he guides and ensures I do the right things always. I miss him and the rest of the family.

However, I am constantly in touch with them on phone.

You were Plateau United’s influential striker. How do you think they will cope without you, especially in the Champions League?

It will interest you to know that Plateau United is not built around one player.

There are so many good strikers in the team.

In fact, my exit has made way for others to shine.

And I have confidence in the ability of the coach to raise a formidable squad for the continental challenge.

What is your message to your teeming fans back home?

I want to thank them for their prayers for me.

I will continue to work hard to justify their support for me. I know they will miss watching me live, but some of them will still watch me anytime I play for my new club.

I am hugely indebted to my fans across Nigeria.