I would have married Hanan Buhari – Fulani herder

Twenty-two year old Abdullahi Bashir from Adamawa State had been making moves to date Hanan, one of President Muhammadu Buhari’s daughters who got married on… 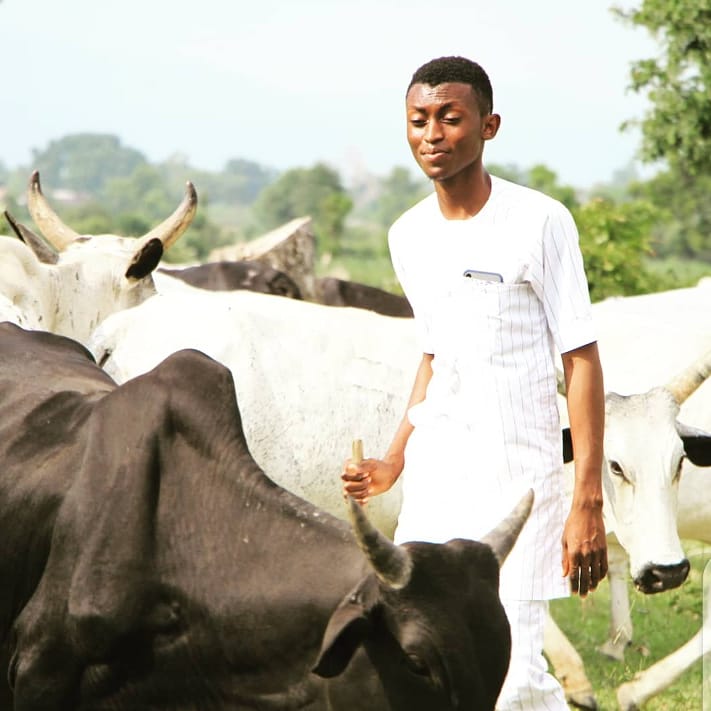 Abdullahi Bashir, a 22-year-old son of a herder from Adamawa State, fell in love with Hanan and her photography, combed the streets of Abuja searching for her and offered 150 cattle in brideprice if the President’s daughter would marry him

Bashir was not the only man gunning for Hanan’s hand in marriage. The police in Kano had to intervene to stop another twenty-two-old man, Abba Ahmed, from committing suicide if Hanan did not mary him. Police spokesman, DSP Abdullahi Haruna, told newsmen in Kano that Ahmed rescinded his decision after the police counselled him against the plan.

And in Adamawa, after efforts to meet the girl to express his love failed, the young Fulani man, Bashir, took to the social media, posting a video in which he said was willing to offer 150 cows as bride price if she agreed to his proposal.

However, when Bashir learnt that Hanan was getting married to another man, he accepted it as the will of God and announced his contribution of 50 cows for the wedding ceremony.

Bashir said, “By offering 150 cows for Hanan’s hand in marriage, I didn’t mean to show that I am wealthy.

“In fact I am nobody.

“I was not looking at the market value of the cows.

“I was looking at the value of a cow to a Fulani man.

“This shows how much I value and love her.”

Far from being a typical stick-wielding, forest-dwelling cattle boy, Bashir is a Google-certified web developer and digital marketer with profound interest in digital photography and videography.

He told Daily Trust, “I developed the website of Koode Radio International, a Fulfulde AM station located in Abuja, and I am the one managing the site.

“I am into journalism as a freelance reporter with the radio station.”

He revealed that he was currently focusing on using his YouTube channel to create awareness among his Fulani kinsmen about modern ranching business, as well as train youngsters on technology and innovation.

Bashir said Hanan caught his attention on the social media after he watched images of her taking professional pictures at an event in Bauchi as photography was a profession seldom explored by girls from northern part of Nigeria; let alone by Hausa or Fulani girls.

Scrolling down Hanan’s profile pages on social media platforms, the young man came across many pictures and posts that showed how much he shared in common with the beautiful and adventurous Fulani girl.

Within a short time all his close friends knew about his preoccupation with the girl he was yet to meet; that they nicknamed him Gorko Hanan, a fulfulde phrase meaning Hanan’s husband.

He later discovered the photographer he had been preoccupied with is the daughter of President Buhari.

Yet he was not scared.

Rather than recoiling in fear, he searched for more information about the young photographer.

However, one thing the Fulani boy failed to realise was that he had fallen in love with Hanan until a close friend called his attention to the reality.

Bashir said, “It was later that I got to know she was the president’s daughter.”

He confessed that staring at her photograph on the screen of his computer, he understood the pursuit would be a herculean task.

He said he would always talk about Hanan; telling his friends about her impressive character and how she dedicated herself to her profession despite her social status.

He explained that, “I always discussed with friends, showing them her pictures.

“One day, one of my friends, Ahmad Faisal, just asked if I was in love with the girl.

“Wallahi! I suddenly realised it was true; I really loved her.”

Determined to actualise his dream of marrying Hanan, the young man sought for the support of notable Fulani leaders for his lofty ambition and then travelled all the way from Yola to Abuja to try his luck of finding her.

He said he was confident Hanan, being a simple and business-like personality, could be out there in one public or private event in the highbrow areas of Abuja doing what she liked best – taking pictures, and that he could be lucky to meet her.

During his escapade Abuja, the young man would gatecrash into venues of high profile weddings and other events that attracted the wealthy and mighty in case Hanan was there taking pictures or sitting as a guest.

He never found her.

He walked the streets of Abuja in search of his love, unfortunately it did not work out that way, so he came up with another idea; the internet.

He quickly shot a video of himself expressing his love for Hanan and announcing the offer of 150 cows as bride price if she agreed to marry him.

He posted the video online.

He explained that, “I was still exploring the social media option when I heard she had been engaged, so I had to give up.

The next option would have been to go to her grandparents’ house in Yola and establish a connection with her through her relations.

Now that she is getting married, I wish her a happy married life and I am happy to donate 50 cows for the wedding.”