Taiwo Olatunbosun, an aide of the Ekiti State Governor-elect, Biodun Abayomi Oyebanji, has denied that the All Progressives Congress (APC) bribed the electorate during Saturday’s… 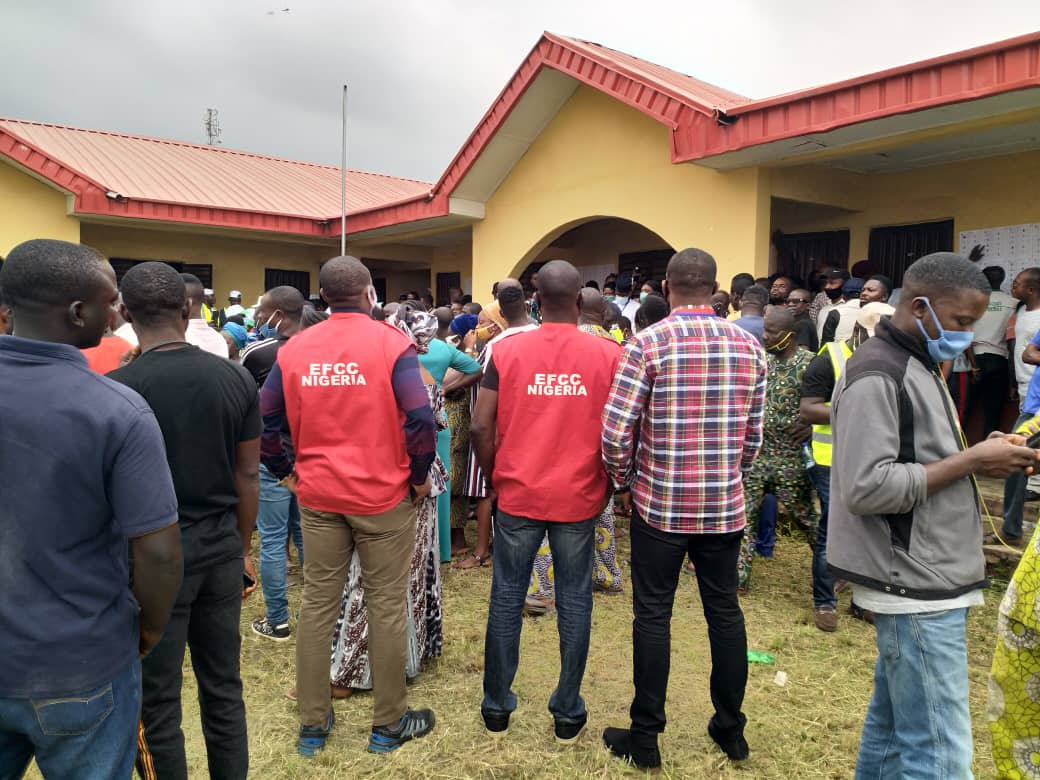 FILE PHOTO: Operatives of the Economic and Financial Crimes Commission (EFCC) on the look out for vote buying and other financial crimes at PU009 Ward 4 Sacred Heart Primary School, Cathedral Area, Akure

Taiwo Olatunbosun, an aide of the Ekiti State Governor-elect, Biodun Abayomi Oyebanji, has denied that the All Progressives Congress (APC) bribed the electorate during Saturday’s governorship election in the state.

Olatunbosun, who is the director, media and publicity unit of Oyebanji’s campaign organisation, said this while responding to the allegation of vote-buying by the APC during the election on Channels Tv’s Sunrise Daily on Monday.

Ben Oguntuase, the chairman of the strategic committee of Segun Oni’s campaign organisation, while speaking on the same programme, had accused the APC of inducing the voters with money.

But Olatunbosun said the supporters of the Social Democratic Party (SDP) were bad losers.

He claimed that there was no vote-buying by his party, saying he didn’t witness one and was not informed of any all over the state.

He said, “My position about last Saturday’s election is that the election was free, fair and was credible enough and actually reflects the popular opinion of the people of Ekiti. They are coming with face-saving excuses now. I am not surprised.

“I am not surprised in the sense that you can not expect an emergency assemblage of people within a period of one month to come around to think they will be the one to determine what the people of Ekiti will do with their votes.

“I don’t know where they are getting this over-bloated idea of their strength and that is making them think they are as popular as the APC in Ekiti State. But let me expressly say that I did not witness any vote-buying anywhere and he is alleging that. The onus of proof is on him.

“Ekiti people are enlightened, knowledgeable and they know the process of election and they understand the dictates of the rules of the game and I believe we should respect them by not taking them for granted.”

Oguntuase, while speaking on the programme, said the election was not won fairly by the ruling party, alleging that APC officials shared money with those who voted for its candidate at the election.

Oguntuase also accused officials of the Independent National Electoral Commission (INEC) and security operatives of aiding electoral malpractices, saying voters’ cubicles were stationed in a way that voters could show the party they voted for to the agent of such party.

He said when he complained to the security officers on duty, they claimed it was not their job to determine how the cubicles should be stationed.

He said, “Why do we need to deploy such a large contingent of policemen and other security agencies if they can not stop violence when it’s occurring in their presence.

“Vote-buying is a criminal offence, when they see that, we even called them, but they were very lackadaisical in their attitude and they never really cared. So, what was the need for their presence?

“INEC positioned their boxes and other equipment in a way that totally compromised election. This election that just took place in Ekiti lacked integrity.

Oyebanji, who is the immediate past Secretary to the State Government, won in 15 out of the 16 local government areas of the state. He polled 187,057 votes.