How youths generate income through farm labour in Kano

With the harvest period of the 2022 farming season still ongoing, many youths from Kano villages are discovered to have been surviving through farm labour.… 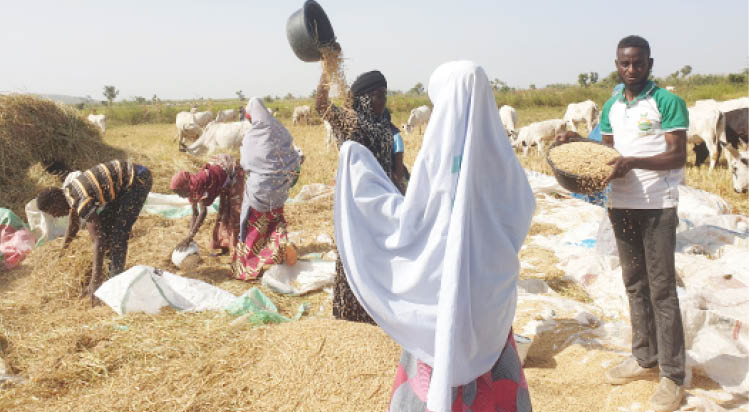 Some of the farm workers

With the harvest period of the 2022 farming season still ongoing, many youths from Kano villages are discovered to have been surviving through farm labour.

These young people, both males and females, work on various segments of farming processes for large and small holder farmers.

Daily Trust on Sunday gathered that although it is an era of modern farming through the use of technology, the young people, between the ages of 10 to 35, still contribute a lot to the farming sector, as not all farm activities are done with the machines.

On a visit to some of the largest farms in Kura, Bunkure and Rano axis of Kano South, many of these young men and women were sighted working in various farms. While those between the ages of 25 to 35 do the hard labour, little girls of about 10 to 15 years engage in the less tasking/stressful jobs.

Some of works they are do include farm clearing, planting, harrowing and harvest. Some are also involved in the packaging and transporting to stores and markets.

Speaking to a group of youths in a rice farm in Gafan area of Bunkure LGA, they expressed satisfaction with what they earn per hectare. They said 10 people can harvest rice from one hectare of land in a day.

Many of them described their vast farming land as a blessing which has reduced the burden of life, abject poverty and hardship, as well as prevent their youths from going to the cities to look for money.

Their leader, Ma’aruf Usaini Gamadan, 28, said every farming season, they engage in farm labour and have no time to leave their villages for cities to look for job, adding that they earn reasonable amounts of money enough for them to cater for their needs.

“There are different things to do here and different people are working on those segments. Most of our youths remain at home and earn enough to take care of the family. Only the lazy ones complain because as you can see, we are busy working almost all year round—the rainy season, post wet and dry season.

“The harvest season is more profitable honestly as it is the final stage, and rice farm is the most expensive of all. We normally start with cutting the rice and the following day, we will start removing the paddy from the grasses using drumsticks and putting inside sacks.

“We collect N50,000 per hectare and 8 or 10 of us normally work together. We sometimes get up to N4,000 each after removing money used for hiring farm implements,” he said.

Another girl from a team of ladies doing menial jobs in the farms, Sadiya Shehu, 14, said almost 90 percent of the girls working in the farms are saving to buy their marriage furniture themselves through farm labour.

She said although they sometimes merge their work with scouting for remains of farm waste, they earn more of their saving through farm labour as the farmers pay them N300 per sack and also offer gifts of farm produce.

“Many of us you see here are about to get married and we are working to support our parents. The little we are getting is what we use in purchasing our furniture and other utensils for our matrimonial homes. As we speak, I have four sacks of rice already and about to fill the fifth one. I got all these from the farm labour and leftovers from the farms.

“They pay N300 per sack and normally they can get 30 to 40 sacks per hectare, which is around N10,000 and five of us work in a farm. Apart from that, they also give us rice and at the same time, we work on the remaining dust to get some rice.”

She said other works they do is usually at the beginning of the season when they plant, remove grasses and spray fertilizer on farms and they are paid for all that.

“We usually leave home in the morning and return in the evening. But we have to do it because we also see our elders doing it,” she added.

There are also porters among the labourers who transport the produce either on their heads or on motorcycles to the stores.