Thousands of wheat farmers in Bauchi State have been plunged into dilemma over challenges of late arrival of inputs, fuel hike and technical skills about… 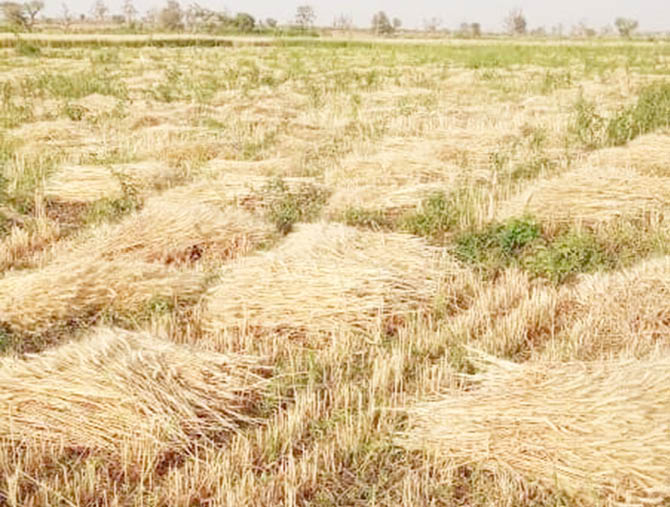 Havest going on in some of the wheat farms

Thousands of wheat farmers in Bauchi State have been plunged into dilemma over challenges of late arrival of inputs, fuel hike and technical skills about wheat farming in the state

Investigation indicates that Bauchi State registered over 10,000 farmers who were engaged in wheat production but the crop has recorded poor yield as a result of late distribution of inputs, invasion of cattle and goats on their farms, among others.

One of the wheat farmers, Abubakar Abdullahi, told Daily Trust on Sunday that many of the registered farmers had abandoned farming due to the late arrival of inputs and the hike in fuel price to run the water pump and the hose, particularly the inlet and outlet hose used to transport water to their farms.

Abdullahi said, “Another factor threatening wheat farming in Bauchi is the invasion of herders’ animals, especially cattle and goats, on the farms because it was dry season farming. Everywhere is dry, so they grazed into the greener posture of the wheat farms. This challenge has compelled some farmers to either source for funds elsewhere to fence their farms or stand to lose everything in their farms.”

“If you are farming two hectares you need to build a fence to secure them. This is a major challenge because many farmers cannot afford to build fences while battling with fuel hike. But the farmers cannot protect their farms from invasion without building fences.

A wheat farmer in Bauchi, Rauf Oyewole, said he was undecided about farming the crop this season because of the challenges.

He said, “The challenges of last season are reoccurring this year. Today is November 16 and the inputs have just arrived Bauchi. I got last season’s inputs on January 4. The delay in planting was responsible for poor yield.

“Whoever wants to go for wheat farming must use his money to buy inputs. At the moment, interested farmers should shoulder the responsibility of buying inputs like seeds, fertiliser, herbicides and all the necessary inputs at market prices. Another challenge is the hike of fuel.

“Another challenge is that hoses for water inlet and outlet were not given, and in the market the cost of a hose is more than that of water pump.”

When contacted, the state extension officer of the National Wheat Farmers, Processors and Marketers Association of Nigeria (NWFPMAN), Yusuf Sani, said the late arrival of inputs from the Central Bank of Nigeria (CBN) and Heritage Bank was the major challenge of wheat farming last season in Bauchi State.

Sani said, “The major challenge is late arrival of inputs, and secondly, lack of technical knowledge of how to grow wheat by farmers in Bauchi. Another disturbing challenge is that farmers have taken these inputs as national cake because they were given as loans from the CBN and Heritage Bank, in collaboration with our association, the NWFPMAN.

“One other problem in Bauchi is poor identification of the real farmers. Some of the farmers don’t know the size of a full hectare. And if you do not plant a hectare you cannot afford to pay loan.

He, however, disclosed that the association had taken drastic measures to tackle the challenges, particularly the late arrival of inputs, saying, “We have discussed the issue with relevant stakeholders and they promised that all the inputs would come at the appropriate time.

On the arrival of inputs, Sani said, “As I am taking to you we have enrolled over 30,000 farmers for wheat in Bauchi. They were all screened and confirmed by traditional rulers of their respective communities. We have registered them and submitted the list to our national secretariat and waiting for the total number of hectares approved for Bauchi State.

“This time around, the association has made it clear that inputs should not be given to any farmer unless we have seen his farm.”

Responding to the challenges he said, “The association had, during a stakeholders meeting with the CBN and Heritage Bank, unanimously agreed to resolve the challenges; and on their part they will bring the inputs as soon as possible. Immediately they bring the inputs we will release them to the farmers. Insh Allahu, this season we will ensure that 100 per cent inputs reach the hands of the farmers.

On the number of farmers that abandoned wheat farming due to late arrival of inputs last season, Sani said, “Those farmers you are talking about are not real. Each registered farmer gets hybrid seeds, 10 bags of fertiliser, a water pump, herbicides, among other inputs.

“There is what we call farmers’ contribution, especially in the aspect of labour, which demonstrates commitment to finance other activities to support the farming. Let me tell you that hundreds of local farmers have been coming to the office asking for only the seeds. City farmers are the ones crying about other inputs.”

When contacted, the Bauchi chairman of the Wheat Farmers Association of Nigeria asked for time to respond to the situation of wheat farming in the state.