For almost a week, celebrities, social media influencers, students, politicians, and media analysts have been commenting on the plight of Aminu Mohammed, who landed in… 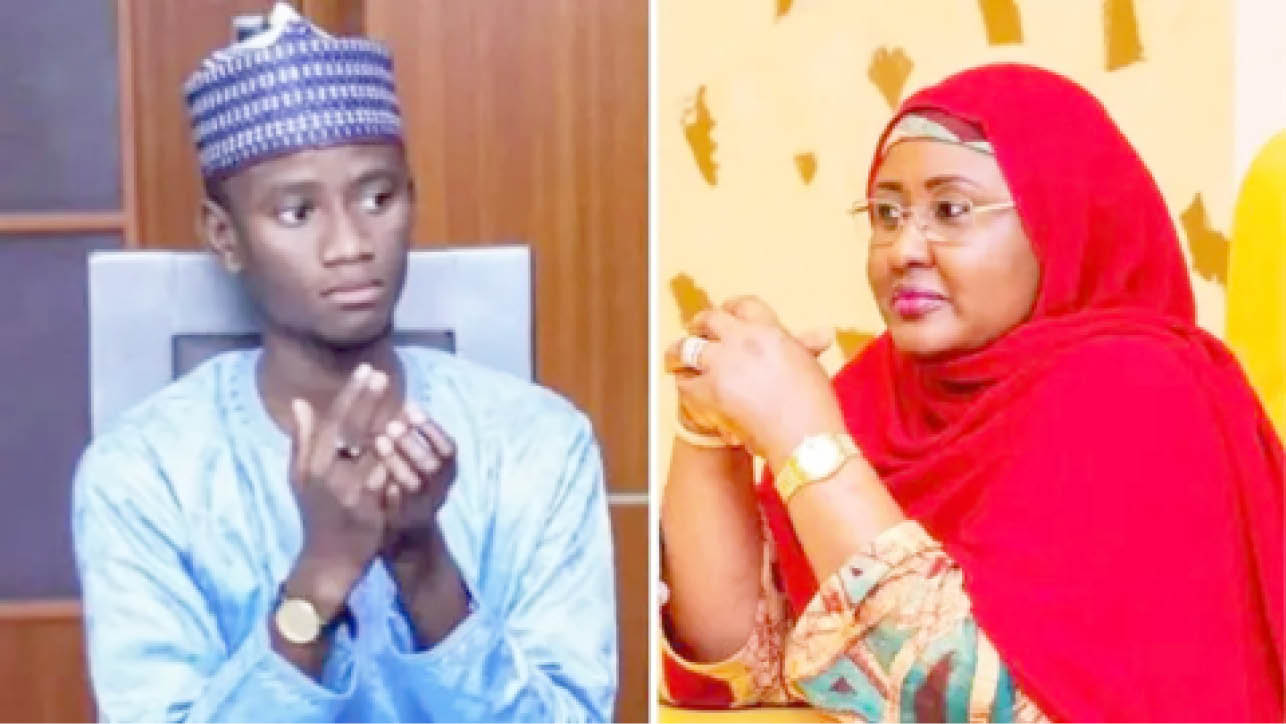 For almost a week, celebrities, social media influencers, students, politicians, and media analysts have been commenting on the plight of Aminu Mohammed, who landed in trouble over a comment that the wife of Nigeria’s number one citizen found offensive.

Back in June, Mohammed had tweeted that the First Lady was feeding ‘fat’ on poor people’s money.

The tweet, which was posted in Hausa, read: “Su mama anchi kudin talkawa ankoshi.” It loosely translates as “Mama has fed fat on poor people’s money.”

A picture of Aisha was posted with the tweet to match the practical joke.

In a bizarre reaction, the 500-level student was arrested, detained and allegedly tortured in the Presidential Villa, on the orders of the President’s wife.

In an interview with BBC Hausa, a younger brother of Mohammed’s father, Shehu Baba Azare, said the 24-year-old disclosed this when he called from detention.

Azare said they need their son to be released to them.

He said, “We were not aware of it until five days later. Aminu’s friend called my brother (Aminu’s father) and told him that he hadn’t seen Aminu for the last five days.

“The next day Aminu called his father and told him that he was arrested and taken to Aisha Buhari in the Presidential Villa and he was beaten and detained. He said one of the security agents gave him his phone to make the call.

“Adamu (Aminu’s father) also told me that he was called from the university informing him that his son was arrested but without their knowledge. We are begging the First Lady, please forgive him, you are a mother.”

The issue generated more controversy after Mohammed was arraigned at a Federal Capital Territory High Court for cyberstalking and subsequently remanded in Suleja Prison.

Trust Nigerians, they came up with different memes. On WhatsApp groups, Tik Tok, Facebook and across social media, Nigerians kept interpreting the situation in ways they could.

While some persons illustrated cartoons, others came up with skits and some others used quotes to drive home their point.

In one of the memes sighted by our reporter, images depicting Aisha’s looks in 2014 and 2022 were drawn with a pencil and placed side by side. This was circulated on so many WhatsApp groups.

In a cartoon, Bukarti Bulama sketched a feminine hand grabbing the neck of a young man that could easily pass for Aminu.

Tweeting from the handle @MercyEgbai, a social media user wrote, “The hardship Nigeria and Nigerians have suffered on this APC-led administration has made some of them to realize that GEJ and Patience Jonathan were true democrats. They didn’t harass Arewa youths or the southern youths for the wicked and vile tweet towards the first family.”

On her part, Activist Aisha Yesufu tweeted, “Who is Aisha Buhari that an aggrieved citizen cannot talk about? Those of you talking about her so-called powers need to ask yourselves whether you are citizens or slaves. Duniya budurwar wawa!”

Condemning the “reckless abuse of power”, Inibehe Effiong, a lawyer, tweeted, “Section 39 of the 1999 Constitution guarantees freedom of expression. It is not acceptable to deploy state apparatus in such a draconian, vindictive and oppressive manner the way Mrs Aisha Buhari has done to settle personal scores. The SSS has no jurisdiction in this case.

“I unreservedly deprecate this reckless abuse of power and demand the immediate release of Aminu Adamu Muhammed, a student of Federal University Dutse.”

Mr Macaroni said because he was a “victim of persecution,” he had a lot to say about situations like Mohammed’s.

“I can speak so much about issues like this because I have been a victim of oppression and brutality and I know how horrible the experience is!!! If you are being held by security agents with backing from political figures, they will do the unthinkable!! Dem go lick you finish!!

“President Goodluck Jonathan and his Wife suffered so many insults. Even from people who are in this present government. APC trolls curse and insult some of us here everyday. We dey chest am. The ones we can’t chest, we go to court! Madam First Lady, stop abusing power!!!

“Madam First Lady, you are not God!!! If you have any grievance whatsoever, go to court!!! You are not bigger than the citizens of Nigeria neither are you bigger than the law!! You should use your power to serve the people not oppress them!! Free Aminu!!!,” he said in a series of tweets.

Also condemning the arrest, a social media influencer, Daniel Regha, said it was an abuse of power, adding that former First Lady Patience Jonathan was unfairly mocked but she never retaliated.

In his reaction, Senator Yusuf Datti Baba-Ahmed, Vice Presidential candidate of the Labour Party (LP), said citizens had the right to criticize the government without fear.

“Individuals must be free to express themselves freely and any infraction of law be pursued as civil matter and not through high-handed abuse of power. This is not 1984. We lend our voice to the genuine calls for his immediate release,” he said while addressing a press conference on Thursday.

Also, in an interview with Daily Nigerian, Najatu Mohammed, a commissioner in the Police Service Commission (PSC), charged Nigerians to rise up against Mrs Buhari’s action.

“I think Nigerians should rise up and say no to this. We will no longer accept this tyranny. Buhari left a vacuum in leadership that is why all manner of people grabbed it. The same woman who said Mamman Daura had taken over her husband’s government has now become a tyrant. It is apparent she didn’t make that statement for God and the country but her selfish interest,” she said.

Gubernatorial candidate of the Peoples Redemption Party (PRP) in Kano State, Salihu Tanko Yakasai, said Mohammed isn’t a terrorist, and therefore he shouldn’t be locked up.

“Aminu isn’t a terrorist that should be locked up and denied access to his family and lawyer. What he did was wrong but what is being done to him is worst. He should be released or charged to court. The commando type of picking up citizens without due process is unacceptable #FreeAminu,” he tweeted.

Amnesty International also called for the “immediate and unconditional release” of the 23-year-old student.

“For a tweet on the First Lady of Nigeria #Aisha Buhari, #Aminu Muhammed is still held incommunicado since his arrest on 8 November by Nigerian security operatives. —While unlawfully detained, he was subjected to severe beating and other forms of ill-treatment. —#FreeAminu now,” the organization tweeted.

But the comment of Gumsu, a daughter of Sani Abacha, late military Head of State, stirred a bit of controversy as many Twitter users attacked her over what they described as the poor human rights records of her father’s regime.

In a veiled reference to Aisha Buhari, Gumsu tweeted, “Alhamdulillah for the good upbringing that I received from my parents. May we never fall victim to violence/show of shame. Omo pedigree no be lie wallahi.  Alhamdulillah wa shukrulillah always.”

Social media users also criticised Aide De Camp (ADC) to the First Lady, Usman Shugaba, over his alleged role in the arrest and torture of Aminu.

Amid the storm, the president’s wife refused to comment. Her spokesman equally kept mum over the incident as Barrister Aliyu Abdullahi, Special Assistant to the President on Media and Publicity, Office of the First Lady, neither picked calls nor replied a text message from our reporter.

The Presidency has also not reacted to the matter as of press time.

Perhaps, the president’s wife did not assume the matter would take this dimension when the decision to arrest Aminu was taken.

“The tyranny of arresting a student and beating him up should not be condoned. It is not only criminal but patently abusive of the legal system and the collective outrage of Nigerians who have been calling for his release,” he wrote.

Ibrahim’s thought apparently aligned with that of Shehu Sani, activist and politician, who wrote, “One Aminu arrested has now given birth to several Aminus in the social media space. Wrong advice to Caesar Cleopatra.”