The left hand of a two-month-old baby was amputated after it was allegedly fractured by his father in Imo State. The boy’s mother shares her… 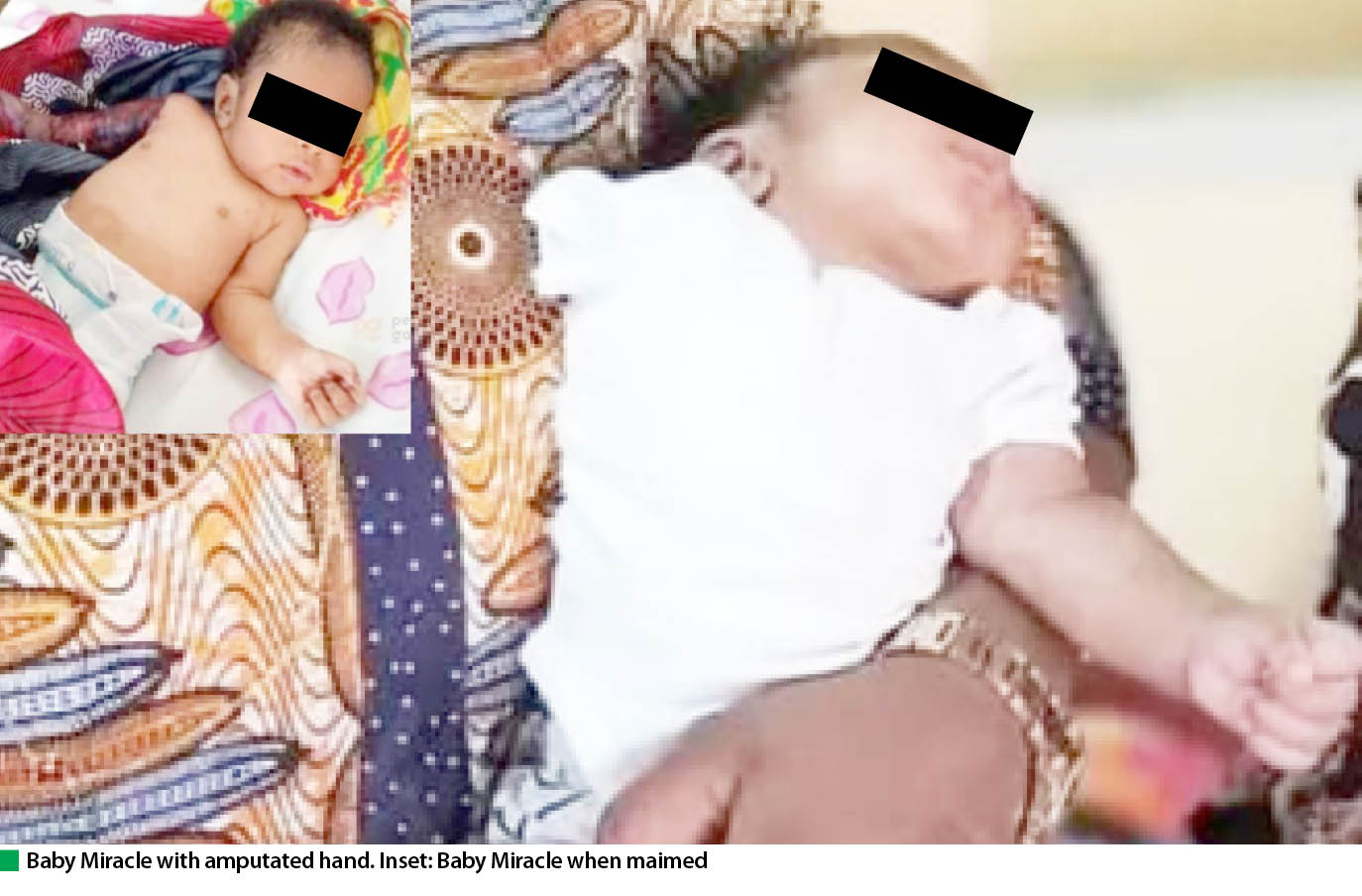 The left hand of a two-month-old baby was amputated after it was allegedly fractured by his father in Imo State. The boy’s mother shares her predicament alongside what led to the amputation of the boy’s hand in this report.

As he paces in and out of the Paediatric Ward 13 of the Federal Health Centre Owerri, Chikwe whose grandson’s arm was allegedly fractured by his distraught in-law could not fathom the fate that had befallen his daughter. When our correspondent arrived the ward on Thursday, baby Miracle and his mother, Favour, were sleeping on a rug on the floor of the hospital.

Our correspondent had to wait for close to one hour for her to wake up.

As our reporter was speaking with her after she woke up, her father, Chikwe, sauntered in, and queried his daughter on why she was talking to the media. He angrily barked at the reporter, asking him to leave the ward as he was tired of speaking on the issue.

Two days earlier, Chikwe had been summoned from his base in Lagos following the fate that had befallen his daughter, Favour.

According to information, Favour had left her parents in Lagos to Imo to stay with her lover, Confidence Amatobi, who hails from Amurie Omanze in Isu Local Government Area of Imo state.

The incident that led to the amputation of the baby’s arm happened penultimate Friday night. Favour told our correspondent that she had woken up to ease herself when she heard the shrill cries of her baby who was born two months before.

“When I rushed into the house after my baby’s persistent cries, I discovered that his right arm has been fractured. I asked his father what happened and he told me that Miracle was disturbing his sleep and he used a plastic hanger to beat him thereby breaking his arm.

“I requested that we take the baby to the hospital, but he refused. Instead, he used wood and elastic bands to tie the baby’s hand. After some hours, the  arm started swelling up.”

She said that as she attempted to leave the room with the baby, Amatobi blocked her and locked both of them in the room.

“He prevented me from talking to neighbours or seeking for assistance. To make sure that I had no contact with the outside world, he took my phone from me. But after two days, I found myself outside and reported to the boys in the neighbourhood. They arrested him but he got loose from their grips and escaped.”

It was gathered that by the time neighbours assisted her to take the baby to the Federal Medical Centre Owerri, gangrene had set in and the fractured hand had to be amputated from the shoulder.

“I am confused. I don’t know what to do. Please I am tired of speaking,” she says.

Our correspondent observed baby Miracle sleeping, oblivious of the fate that had befallen him.

One of the nurses, who spoke to our correspondent on the condition of anonymity because she was not authorized to speak, said that the baby was brought in a bad condition and the only remedy was to cut off the arm to avoid further damage.

Favour’s father, who was outraged at what happened to his daughter, refused to disclose the relationship between his 20-year-old daughter and her lover.

He said, “As I am here, I am supposed to go back to Lagos because my wife broke down when she heard the news of what happened to Favour. I could not go back because of her condition. Since this incident happened, she had been crying and behaving abnormally.

“But I must express my anger at the media. Since the baby was brought here on Tuesday, a lot of them have been here and they assured me that they will not show the face of the mother and the baby in the media because he’s a minor. But they reneged on that promise. I have been reading papers and I know in such cases, only the face of the suspect and not the victim is shown. The story has been all over the social media and my family members and friends have been calling me from Lagos and home regarding what happened to Favour,” says the Idemili South-born Chikwe.

“As I am talking to you, my wife is in Lagos and she’s also down because of what has happened to Favour. You people disappointed us. None of you came with even diapers for the baby.”

However, Chikwe could not answer the question on whether he knew his daughter’s whereabouts sequel to the incident and whether his daughter was legally married to Amatobi. He simply sighed and brushed aside the questions.

Imo State Coordinator of the National Human Rights Commission (NHRC), Mrs. Ukachi Ukah, told our correspondent that she has reported the matter to the ministry of women affairs and social development, the police and the state attorney general.

According to her, information gathered revealed that Amatobi and Favour were not legally married.

She said, “We gathered that they are not legally married. They are only co-habiting before he put her in the family way. I have informed the relevant authorities about the situation and we intend to follow up to know their reactions. We have told the police to apprehend the culprit for possible prosecution and the attorney general to get ready to take the suspect to court once he’s caught.

The Imo State Chairperson of National Association of Women Journalists, Dr Dorothy Nnaji, who brought the matter to NHRC, said she’s following up on the matter.

Police Public Relations Officer, CSP, Mike Abattam, told our correspondent that the police are on the trail of the suspect.

“We have mounted a serious manhunt for the suspect and we have also commenced investigation into the matter. We’ll leave no stone unturned in ensuring that the suspect faces the full wrath of the law,” Abattam said.