“Life is all about opportunity, and making money is taking any opportunity that presents itself and utilizing it properly,” this was the reply of one… 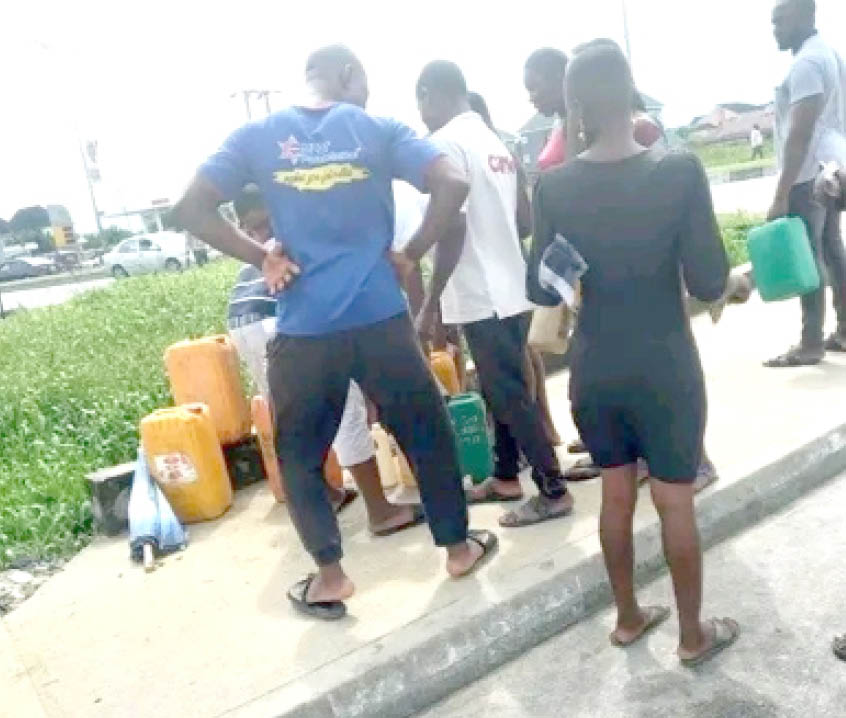 “Life is all about opportunity, and making money is taking any opportunity that presents itself and utilizing it properly,” this was the reply of one of the operators of black-market fuel in Yenagoa, who simply identified himself as Moses, when Daily Trust on Sunday asked him about the danger of his new found business.

If there is any business the 2022 flood disaster in Bayelsa State has introduced, it’s the hawking of fuel on the roadside by the people who capitalize on the disaster to make money.

But with the look of things, the dealers are not willing to relinquish the business even as flood water has receded and fuel started coming to the state.

During the peak of flooding on October, both Delta and Rivers states axis of the East-West Road were totally cut off by flood water, thereby making it impossible for petroleum products and other essential commodities to come into the state. This created fuel scarcity and encouraged black marketing of fuel by even minors.

Despite the looming danger of fire outbreak, especially as the harmattan season approaches, the operators of the business are still insisting on continuing with the business.

One of the operators, who spoke on condition of anonymity, told Daily Trust on Sunday that it was the business that sustained him and his family during the flooding and Christmas is approaching, so his family has to survive.

According to him, during the flooding period, he was making hundred percent gain in any 20 litres he sold, and on good day, he sells up to three 20 litres jerrycans.

He said though now that the flood water has recedes and filling stations have started dispensing, they still make good profit from the business, as they sell at N350 per litre while filling stations are selling at N200 per litre.

The Bayelsa State government, in trying to ameliorate the plights of the citizens and reduce the looming danger of fire disaster occasioned by black marketing of fuel, had barged PMS from Port Harcourt to Yenagoa for onward distribution to petrol stations.

This is because the East-West entry to the state was badly damaged by flood and undergoing repairs, thereby making it difficult for tankers to move fuel into Bayelsa State.

Already, the hawking of fuel has caused its first major danger in the state, as fire outbreak destroyed properties worth million at a makeshift mini estate along Otitio Road in Yenagoa, the state capital, last week.

Daily Trust on Sunday gathered that the inferno was as a result of fuel stored in the estate by black marketers.

Although no life was lost in the incidence except for burnt injury inflicted on one of the victims, properties destroyed by the inferno include mattresses, generating sets, electronics, clothes, monies in cash, cell phones, vital documents, kitchen utensils amongst many others.

According to eye witnesses and victims, the disaster might have been caused by a certain Nigerien who allegedly stocked black market fuel in one of the apartments where he resides.

One of the victims who identified herself as Mercy Clifford from Angiama community in Southern Ijaw Local Government Area of the state, recounted that she heard a sound like an explosion from a neighbour who was cooking with a stove, before she could realize what happened, the fire escalated immediately due to its intensity and brought down over ten makeshift houses.

She said: “All my properties, my secondary and primary school and church certificates, everything has gone. We are naked now. One of our neighbours was cooking with a stove and fire came from the stove and entered everywhere.”

Some of the sympathizers who thronged the scene of incidence urged those who deal on black market fuel to be wary of the danger associated with keeping highly flammable liquids close to residential areas.

A civil rights activist, Comrade David-West Bekinwariy David, urged the government and necessary regulatory agencies to stop the looming danger of hawking fuel in the streets of Yenagoa and other places in the state in the name of doing business, especially as the harmattan season sets in.

He wondered how people, in some instances minors, hawk highly inflammable substances like fuel without any consciousness for safety measures.

He said: “Honesty speaking, at the moment, the unpleasant manner at which Premium Motor Spirits (PMS), popularly known as petrol, is being sold at every nook and cranny of Yenagoa is quite disturbing, the most worrisome part is that minors, children that have nothing to do with fuel, are the ones now hawking petrol within the metropolis of Yenagoa, as if they are hawking pure water or kerosene.

“It is really worrisome taking into consideration the dangers attached to this business, we are already in the dry season, if this practice is not stopped, we will encounter lots of disasters, and many families will face agony.

“The question is, these people hawking black market fuel around, is there anything like safety measure in their brains or in their conscience, have you seen any of them carrying fire extinguisher, they don’t even think of safety measures, all they are after is that they want to make money, and by so doing, cause one fire disaster or the other to the detriment of others.

“So, for me, I think the government must stop this practice, they should start to sanction or arrest people hawking petroleum products. In every corner, every street you go to in Yenagoa, you will see people hawking petrol. For God’s sake, let us not because of 2022 flood begin to venture into this very risky business. I want to quickly call on the necessary agencies to swing into action and see that this thing is stopped.

“We should also look at the root cause of this black-market sale of fuel because when the flood came last month, there was no petroleum product anywhere for people to use; filling stations all shut down, it was these black marketers that served the people. That is why I urge appropriate authorities to ensure that all the petrol stations have fuel, by so doing, nobody will want to buy fuel at the roadside again,” he said.

As part of measures to ameliorate the suffering of the people and reduce the activities of black marketers, Bayelsa State government recently barged 410,000 litres of petrol to the state.

Receiving the barge at Swali jetty on behalf of the state government, Bayelsa State Commissioner for Mineral Resources, Dr. Ebieri Jones, said the effort is to help ease the biting fuel scarcity affecting the state.

He said the government will soon move against those hawking fuel on the street, urging anybody dealing on such business to stop forthwith.

According to him, the product which was purchased in Port Harcourt by the Bayelsa State Government, will be distributed to the filling stations in the state to sell at government approved price until the condition of the East-West Road is remedied by the government.

He said: “It is a promise fulfilled by Governor Douye Diri-led government. He promised that the state government will barge PMS to the state because of the nature of the East-West Road.

“And today, 410,000 litres of PMS have come, so that the price of fuel will go down to government approved price and to also stop the looming danger of black marketing. We are distributing it to some filling stations in Yenagoa and other towns in the state, to sell at government approved rate,” he said.