At least 100 shops, including shanties, at the Ogbe-Ijoh Main Market in Warri South Local Government Area of Delta were on Sunday razed by fire.… 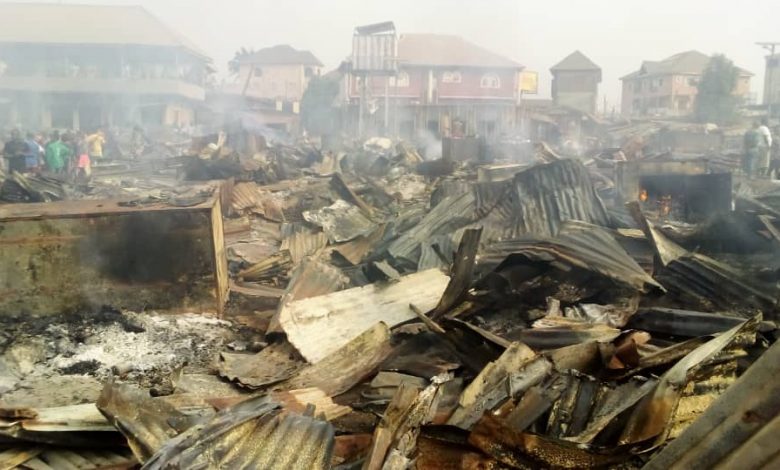 At least 100 shops, including shanties, at the Ogbe-Ijoh Main Market in Warri South Local Government Area of Delta were on Sunday razed by fire.

Property and goods destroyed in the inferno were estimated at several millions of naira.

An eyewitness, who sells tomatoes at a spot near the market, said the fire started at about 2pm.

“I don’t know the cause of the fire.

“I was selling my tomatoes here when I saw flame coming out from inside the market and people started rushing to the scene,” she said.

One of the victims, who wept profusely, said she lost goods worth over N5 million in the fire.

The victim, who could not easily give out her name to newsmen, said she borrowed a lump chunk of the money from a microfinance bank, recently.

“Where will I start from? How will I repay my debt? Government, please help me, I am dying,” she said, crying unconsolably.

The News Agency of Nigeria (NAN) reports that sympathisers, along with some of the traders in the market, were seen trying frantically to salvage some goods.

Fire fighters had hectic time in their frantic efforts to put out the fire, while police and Army personnel as well as Red Cross officials were also at the scene.

The Secretary, Warri South Local Government Red Cross Division, Mr Cyril Kokarhaye, told newsmen that they were at the scene “to ensure nomalcy”.

“We have yet to record any casulties and cannot ascertain the extent of the damage.

“Our water truck has gone back again to refill,” Kokarhaye said. (NAN