Women groups on Friday in Abuja, have called for immediate review of the deployment of police and other security personnel to individuals and organisations. This… 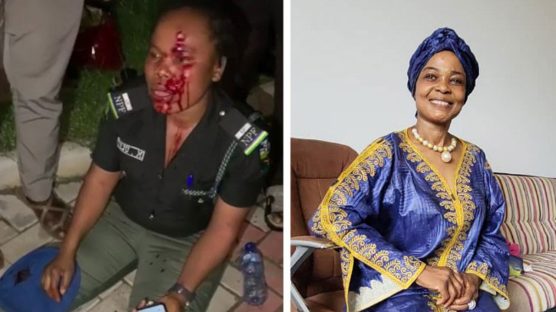 Women groups on Friday in Abuja, have called for immediate review of the deployment of police and other security personnel to individuals and organisations.

This follows the recent incident of Prof Zainab Duke Abiola who reportedly assaulted Inspector Teju Moses, a police orderly attached to her.

In a video clip that went viral on Wednesday, the officer was seen seated on the floor and asking to be taken to the hospital for medical attention while bleeding.

The coalition under the auspices of Women Aid Collective (WACOL), ActionAid Nigeria (AAN), International Federation of Women Lawyers (FIDA) among others, expressed concern that the alleged recent unlawful assault and human rights abuse of Inspector Teju Moses underscores the existing inhuman condition of service which many Nigerian employees are subjected to by their employers.

The Founding Director, WACOL/Tamar Sexual Assault and Referral Centre, Prof. Ngozi Ezeilo and other leaders of the coalition at a media briefing on Friday in Abuja, said the fall-out of the instant case of employees abuse calls to mind the need to review the legal and administrative parameters under which force personnel, particularly the female gender among them are deployed to VIPs.

She said the alleged criminal act should be condemned by all Civil Society Organizations (CSOs) and others, especially that a serving officer would be assaulted and brutalized by a fellow female citizen of the country who she is assigned for Police protection.

“The law applicable in Nigeria ranging from the 1999 Constitution of the federal republic of Nigeria as amended, the police act, the penal code, criminal code have made copious provision that protect human rights, including that of serving police officers,” Ezeilo said.

Also, the Country Director of AAN, Ene Obi, said while it is saddening that the perpetrator is a lawyer and a human right activist who should be advocating against all forms of abuses.

According to her, ActionAid applauds the Inspector General of Police (IGP) for acting promptly in responding to rights violations and her immediate arrest.

Obi said this will serve as deterrent to all those abusing the rights of both male and female officers attached to them, that the eyes of the law are alternative to resolving disagreements.