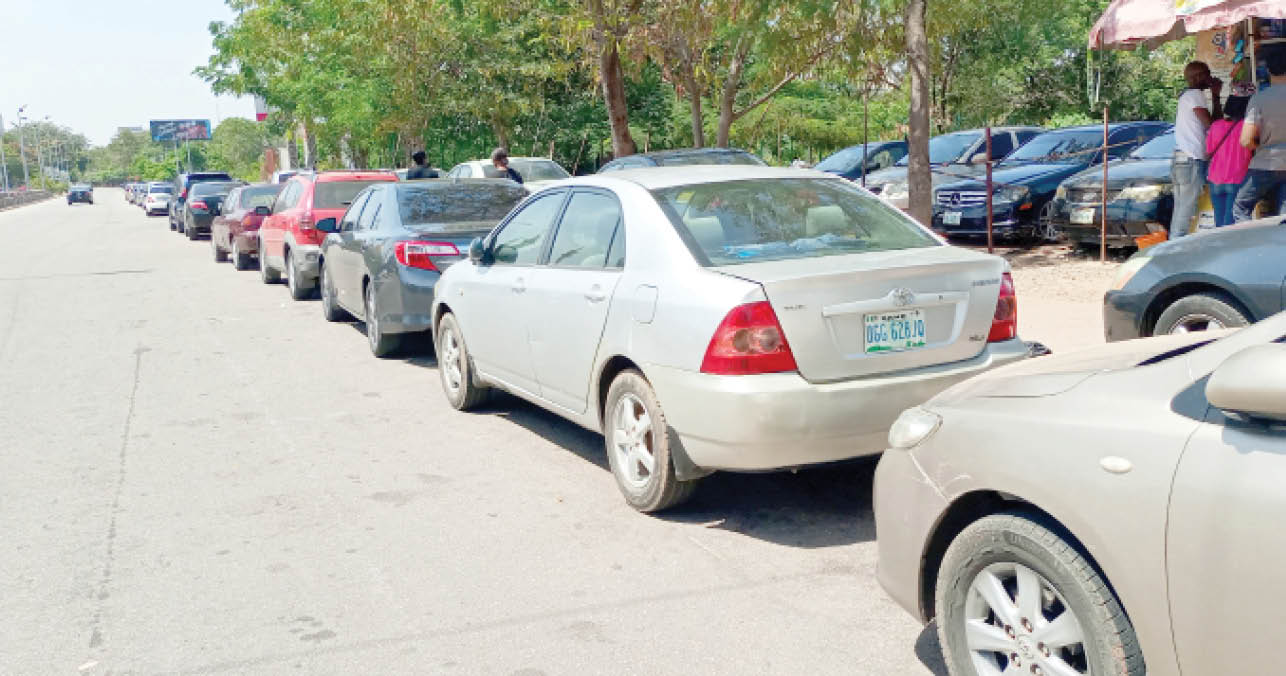 The fresh plan by the Federal Capital Territory Administration (FCTA) to reintroduce the ‘Park and Pay’ policy which raised dust in the past has created fresh apprehension among residents and motorists in the territory, Daily Trust Saturday reports.

The Federal Capital Territory Administration (FCTA)’s plan to reintroduce the controversial ‘Park and Pay’ policy has created fresh apprehension among residents of the FCT. There have been similar attempts in the past.

Controversy had trailed the policy initially with allegations of harassment by sundry agents, extortion, illegal clamping of tyres and forcing of dubious electronic parking fees on motorists.

Under the policy then, motorists who desired to park at designated locations are made to pay a certain amount of money, ranging from N50 to N500.

In 2014, the scheme was in place before a court judgment stopped the FCT Administration from further ticketing parked cars.

In a judgment that lasted over one hour, Justice Peter Affen held that though the park and pay policy might be described as an excellent policy, it lacked the backing of the law.

The plaintiff, SunTrust Savings and Loans Limited, had sued the Minister of FCT and two others challenging the legality of the policy under which motorists paid for parking their cars in the territory.

The plaintiff had sought a declaration that the pay and park policy scheme was ultra-vires, illegal and not in pursuant to any Act of the National Assembly.

It also asked for a declaration that the defendants were not constitutionally empowered to collect tax, fees and rate in the FCT without an Act of the National Assembly.

It sought an order of perpetual injunction restraining the defendants, their agents and privies from collecting taxes, fees and issuing of parking violation charges.

The plaintiff also sought the refund of N20,000 collected by the third defendant and another N100million in exemplary damages.

Justice Affen in determining the suit held that though the first defendant could make laws to collect taxes, fees and rates in the FCT, but the 2005 bye-law of the FCT did not contemplate the park and pay scheme rather made provision for park and ride, “which is not being implemented.”

He further held that the FCT Road Transport Regulation made elaborate provisions, the judge however said: “But I was not fortunate enough to find the park and pay scheme in the 2005 FCT by-law. What it provided for under section 118 and 119 is the park and ride scheme.

“For reasons of clarity, I will state those provisions in extensor.  Section 118 states that the transport secretary may from time to time designate any operational area or zone as a park and ride area or route for the purposes of traffic management between 6am and 6pm.”

In granting the reliefs sought by the plaintiff, the judge declared the scheme illegal, ultra vires, null and void.

The judge also restrained the first defendant from collecting any taxes, rates and fees from motorists except as was provided for by a valid subsidiary legislation.

“The defendants by themselves, privies, agents, servants or whatever name they are called are hereby restrained from operating pay and park scheme save and except the same is provided for or authorised by a valid bye law,” the judge ruled.

But nine years after the suspension of the on-street parking scheme in Abuja, the FCTA last Monday said it had concluded plans to commence the enforcement of the reintroduced policy.

The Director of Traffic Management at FCTA Transportation, Wadata Bodinga, announced that the policy is aimed at bringing sanity and addressing disturbing traffic congestion in Abuja.

The first phase of the exercise would be human-friendly and will commence in March in areas like Maitama and Wuse, at no cost to vehicle owners, he said.

He noted that the new FCT Parking Regulations 2019 has sufficient provisions for the scheme and assured that all the legal issues that were an impediment have been resolved.

Bodinga explained the policy was necessary, following the rapid population growth in Abuja and its resulting traffic congestion.

According to him, “with the present state of the FCT traffic irregularities which pose a great hazard towards road users, the reintroduction of the On-street parking scheme by the administration will mitigate these challenges to the barest minimum.

“While the On-street parking scheme may seem overbearing for some users, the scheme impacts positively on the FCT residents on economic activities through improving customer experience and promoting an efficient parking management system,” he added.

However, a cross-section of the FCT residents, who spoke with Daily Trust on the planned re-introduction of the policy, kicked against it and warned the administration not to bring another policy that would further worsen their sufferings.

According to Mr. John Audu, no amount of explanation on the policy would be welcomed.

Esther Madaki, a civil servant, pleaded with the FCT minister to stop implementation of the plan immediately, saying the policy would further add to the suffering of the residents.

A motorist, Tunde Ogunleye, said the last time the policy was in place, taxi drivers usually engage in fisticuff with those enforcing the policy.

“Then, I could be ticketed over three times in a day when I park my car to get something at supermarkets. I was happy when it was cancelled. I hope the minister stops the implementation so as not to add to the problems taxi drivers already face in the course of doing their work.

“Fuel is expensive and at times scarce. We are forced to pay money for different reasons and the government wants to snuff life out of us again,” Ogunleye said.

In the same vein, Taiwo Adetunji, a cab driver, said since taxi drivers pay for tickets daily to operate, they should be exempted from the policy.

Reacting to the latest introduction, Obioma Ezenwobodo Esq, said the policy is ill-timed considering the economic burden on the citizenry.

“Agreed that government should explore ways to generate funds through taxation but the people of Nigeria and Abuja, in particular, are under numerous taxes, levies, and dues imposed by various strata of government. The policy is the least of policies to be implemented by the FCTA,” he said.

For him, Ali Zubair Esq said he was informed that the FCDA has, in a bid to avert the legal obstacles to the policy as in the past, enacted some bye-laws to back the operation.

“If this is correct, it is a legitimate means of generating revenue. This is being done in other climes as well. It is hoped that the revenue generated therefrom will be used in road maintenance, drainages, etc,” he said. However, in a chat with our correspondent, a public affairs analyst, Emeka Ikechukwu, said the policy would put a stop to illegal parking of vehicles on roads.

“When the policy starts, those who park their cars illegally will have a rethink and change the way they park their cars. This will allow cars to be in the safe hands of security agencies thereby making the car owners not to worry about theft of their cars,” he said.

He appealed that the money involved should be very affordable to allow average-income residents to afford the price.