A claim that the son of Mr Peter Obi, the Labour Party’s Presidential Candidate, was arrested and paraded by the Economic and Financial Crimes Commission… 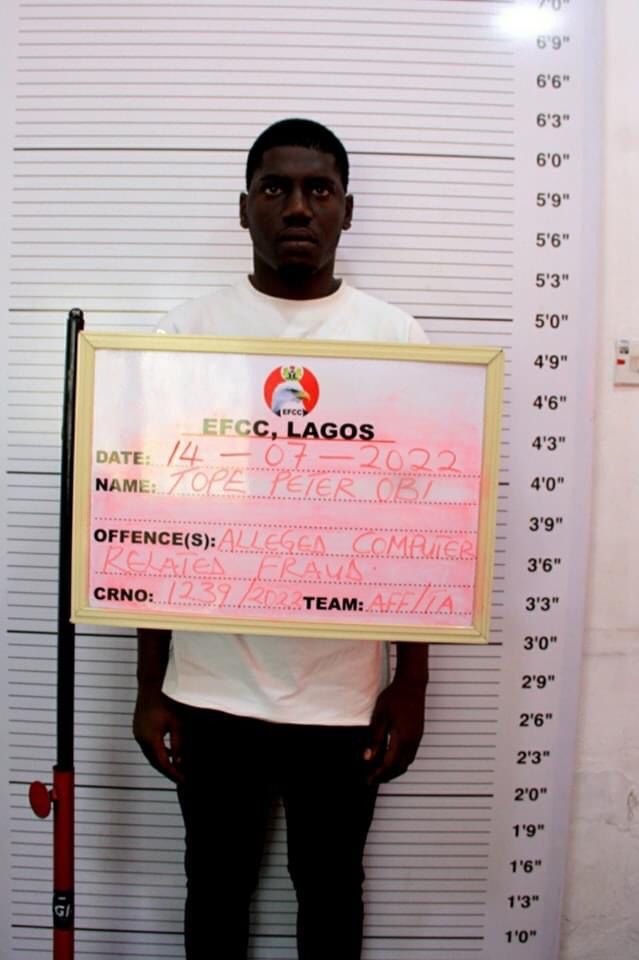 A claim that the son of Mr Peter Obi, the Labour Party’s Presidential Candidate, was arrested and paraded by the Economic and Financial Crimes Commission (EFCC) has gone viral.

The claim was accompanied by a mugshot of a young man with the name Tope Peter Obi.

The video had been posted on blogs, shared several times on social media and generated reactions. The suspect donning a white T-shirt, and black trousers held a placard containing the caption:

A Facebook user said, “Peter Obi’s son in EFCC net,” while another one said: “But wait a minute, so from a presidential aspirant to a senior fraudulent gangster, nawa o, that means if given this country to govern the rest will be history.”

Some bloggers also published the story with the headline: “Court sentences Tope Peter Obi to 1 year imprisonment for possession of fraudulent documents.”

It also generated controversy on Twitter where it was claimed that the suspect is Obi’s son.

Daily Trust reviewed all the posts made on the official handle of the EFCC. The result showed that the photograph, the conviction and the one year’s imprisonment are genuine.

Also, all the details contained on the placard which was published by many social media bloggers corroborated what the anti-graft agency secured the conviction of the young man, Tope Peter Obi.

While details about Tope Peter Obi could not be found, an attempt to detect the differences between Oseloka Obi and Tope Peter Obi, using an in-depth photograph comparison analysis, showed some remarkable differences in size and other features.

While Tope is about six-feet tall, with a round face and is darker in complexion, Oseloka is above six feet, has a long face full, bearded and is lighter in complexion than Tope.

The claim that Obi’s son was paraded is false. Checks by Daily Trust showed that Peter Obi is not the father of Tope arrested and sentenced to one year’s imprisonment for fraudulent crime.

Although the young man sentenced for possession of fraudulent documents is named Tope Peter Obi, he is not the son of the Labour Party’s presidential candidate. Daily Trust investigation revealed that the only male child of Obi is Gregory Peter Oseloka Obi.