In continuation of the marriage series started two weeks ago, Daily Trust brings you the last lap with the South-West version in this edition. Marriage… 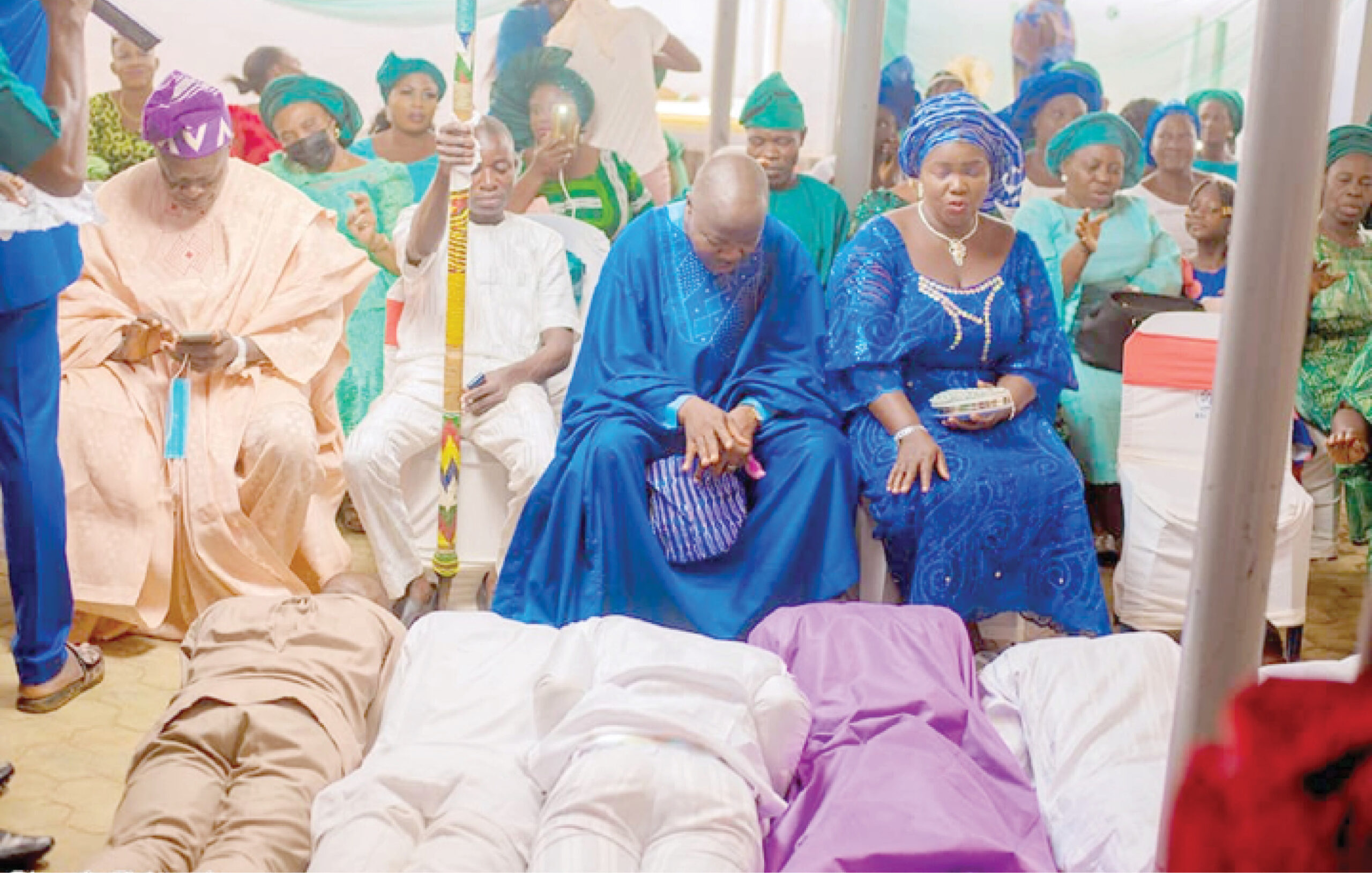 In continuation of the marriage series started two weeks ago, Daily Trust brings you the last lap with the South-West version in this edition.

Marriage is an old institution. It is said to be as old as creation itself.

It is the legally or formally recognized union between a man and a woman  as partners in a personal relationship.

Apart from other traditional requirements and marriage rites which cost money, there are other prices that  must be paid by a man before marriage can take place.  It is the quantum and quality of the requirements, the bride price and or dowry as determined by the culture and tradition of the land as well as the parents of the bride, that determine the entire cost of the deal.

That is why in some places, marriage is expensive, while in other places, it is cheap.  In whatever direction the pendulum of the price swings, there are sociocultural and economic implications that trail it.

If it is expensive, it leads to delay or inability of marriage age youths to get married,  inability to settle down, unwanted pregnancy and procreation, hardship after marriage, especially if all the man’s earnings were expended on  an expensive marriage.

In the South West, traditional marriage is not too expensive. But the quest to show flamboyancy and ostentation in fulfilling certain marriage rites and culture, especially in aso-ebi (uniform apparel) and owambe (party) during reception, makes it expensive.

Traditionally, the engagement list is drafted by the bride’s family members and the bride has no say as to what is requested.

The items on the list differ based on what part of Yoruba land the bride’s family is from. The major items on the list are honey, salt, alligator pepper, Kolanut, palm oil, dry fish (eja osan), fruits, box containing new clothes for the bride, the bride price.  Other items, depending on religion, include Quran, praying mat, praying kettle, rosary, white hijab, veil and tasbir or bible as well as  engagement ring.

In most Yoruba homes, successful completion of engagement ceremony is rated as the major process. However, religion and modernization have increased the level to registry, wedding ceremonies at religious centres and other places before the reception. All these involve cost and make marriage expensive.

Bride price and other prices

The payment of bride price (owo ori) is compulsory during marriage in Yoruba land. It varies from families to families and villages to villages. While some families collect as low as N25.00, others collect N5m.

However, the bride price or dowry is always returned to the groom by the bride’s father, with a charge that he wouldn’t sell his daughter and expect his son-in-law to take a good care of her (daughter). However, there are exceptions.

Dayo, a teacher, married Bunmi on Saturday, July 31, in Epe, Lagos State.  But the groom cut a gloomy look during the ceremony. While getting married, grooms grin from ear to ear and burst with happiness that they are finally leaving the fold of bachelorhood. But reverse was the case with Dayo on an occasion that was supposed to be a day of his joy.

One of his confidants, Mrs Yetunde Gbolahan, disclosed that the bride’s family had asked for too much, especially bags of rice and a cow for guests on the wedding day. Yet, he and his family also needed to buy the same items for their own guests too.

“The bride’s mum and dad insisted that the couple would be the one to buy their outfits for the day. The bride’s father also asked Dayo to buy clothes for his father (grand father-in-law) as well as some of his siblings. All that caused a lot of stress for all parties, since the couple is just starting life,” she said.

Expensiveness of marriage varies, following an experience shared by Mr Adeleke who got married three months. According to him,  some of his friends have paid a dowry of N50,000, while others were asked to pay N2 million.

Adeleke revealed that the wedding list is taken care of by both the groom and his family due to the long length.

“The list is often long with so many unnecessary items like cows, food items and money for certain people in the bride’s family.  But in some cases, the groom could provide  what he can afford, depending on his pocket,” he said.

Sofiya Alaka said she had a smooth ride all through the wedding rites. According to her, there were no absurd rites, the wedding list was not outrageous. So, the groom was able to provide everything on the list.

Dr Kayode Idris, a doctorate graduate of Physics who flew into the country to get married in January,  said that some of the items on his wedding list included a digital Qur’an, fruits, drinks, box, money, clothes which he left for his family members to handle.

“My contribution was moderate. The bride’s family took care of the cooking needs,” he said.

Idris said: “Expensive marriage could be minimized for ease of getting married. But, if those involved can easily afford it, then there is no issue.”

A parent of a would-be-bride, Mr Abdulfatah Babatunde said: “Personally, I see the collection of items on the wedding list as a symbolic appreciation by the groom’s parents for nurturing the bride to adulthood and training her to become an adorable wife. Also, Islam supports it.”

He urged the parents of the bride to be moderate in their demands from the groom. “Those who demand in excess are only giving the impression of giving up their daughter for sale. Such a bride may soon contend with inhuman treatment from her husband and his relatives. She might be treated as a purchased product,” he noted.

“The groom, too, should not insult the sensibility of the bride’s parents. He should feel elated to give out gifts to his in-laws moderately. Moderation is the keyword on both sides.”

A resident of Ibadan, the Oyo State capital, Ibrahim Akindele, who got married recently said his experience had shown that marriage price depends on the financial strength of the couple and their families.

According to him, he spent close to one million naira for both traditional marriage and reception while his parents also committed over a million naira to the marriage.

“My parents catered for the feeding of guests and the bride price. But I know someone who bought only a wedding ring with half a million naira and I know some people can buy it for millions of naira,” he said.

Abidemi Ayinde, a member of Jehovah Witnesses (church) said: “I cannot declare the amount I spent on my marriage. I can only say that I spent all my savings on it. I decided to do that because we appreciate our women who can wait to get married in our denomination. Marriage is a sacred union to us as Jehovah commanded us.”

He added: I spent close to N3 million on my marriage. But I never regretted it because the wedding is a blessing to me. After it, I built my house, bought a good car and doing fine with my wife and kids.”

A 42-year-old graduate of Mass Communication, Olusola Akinade,  who said he had not married, noted that it wasn’t because of the bride price but because of his financial status.

“My decision not to commit myself to marriage is not because of the bride price but because of my financial status. Yoruba says: “Getting married is not the problem, but money for soup is the problem.”

One thing that is commonly practised in Osun is that parents of the bride usually take a large percentage of the burden as the host of the groom’s family.

Marriage conducted according to Islamic or Christian religion is common in Osun.

A marriage manager in Osogbo, Taiwo Alara, said: “It depends on the capacity of the groom’s family. The list may be lengthy in some cases, but sometimes it may not. The most important thing is to fulfil the tradition. The family of the bride would  always consider the financial capability of the family of the groom and his family  and harmonize things. It’s about understanding and cooperation.”

Adeyemo added that his own wedding was moderate. According to him,  his parents bought a cow and two bags of rice for the parents of his wife and gave them some cash. He said his parents also had a cow to take care of their guests and family members. He added that the wedding cost over N3 million.

However, our correspondents report that the quest for a lavish reception, which always involves Aso-ebi and Owambe, has delayed some youths in getting married because of their poor financial status.

Mr Alao Abolaji who got married in 2019 said he spent over N5 million on his wedding reception.

“We got the hall for almost a million naira, while the decoration was done for N850,000. The videographer and his team collected N600,000 for both videos and photography. Then the bill for security/bouncer, caterer and so on,” he said.

He added that he bought the aso-ebi for his parents, his bride’s parents as well as for himself and the bride to add colour to the occasion.

Mr Bosun Adekunle was lucky as his wedding was shortly after the COVID-19 lockdown, leading to the invitation of only a few guests.

“It was after the lockdown and we didn’t want a huge crowd because of social distance and it was good for us. My wife’s parents did not put a burden on us. We paid dowry, though it was not huge amount but they gladly accepted it,” he said

Mr Adio Ayinde, an  unemployed graduate could not proceed with his wedding plan because he could not afford the cost of marriage.

He said: “We couldn’t pick a date because I don’t have money for the wedding ceremony at the moment. So, the delay is because of lack of money. We will surely do it as soon as God opens the door for me.”

A Muslim cleric, Malam Ridwan Olatoye, said that in marriage, God did not mandate anyone to do more than his capacity. According to him, no one should be compelled to become bankrupt because of the wedding.

He said: “The most important thing is to seek the blessings of the parents and fulfil the wedding rites in line with the tradition of prophet Muhammad. Whatever expenditure any one spends on weddings is his own wish. During the time of prophet Muhammad, a man paid dowry with the least item he had and the marriage was a blessing.”

A Christian cleric, Reverend Seun Solomon, said wedding expenses should be at the convenience of the families of the groom and the bride. He said prospective couples should not be made to face the burden of huge expenses for weddings.

A mother, Mrs Funmilayo Ariyibi, said what is important in marriage was peaceful home after the wedding ceremony.

She stressed that there was no need to incur debt over marriage because it  can cause hardship and friction  in the home, especially among young couples.