Former Chief of Army Staff, Tukur Yusuf Buratai has celebrated children in the Federal Capital Territory (FCT) as part of events to mark the Universal… 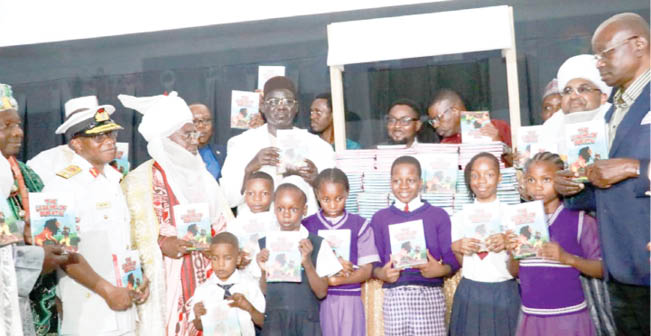 Former COAS with some students and dignitaries

The former Chief of Army Staff, Tukur Yusuf Buratai, on the occasion of the Universal Children’s Day, presented his book, “Legend of Buratai” which he co-authored with Dr Abubakar Mohammed Sani.

“Legend of Buratai” a novel of eight chapters and 120 pages which highlights the path and virtue of bravery, hard work, prudence and fearlessness, was adapted for children and also in an animated movie for the delight of younger Nigerians, with a primary aim of inspiring them on the exemplary public service life of Buratai.

‘Copyright infringement is a giant plague to publishing in Nigeria’

Speaking at the event, Tukur Buratai extolled the brilliance and commitment that the Nigerian children have continued to exhibit which makes them the envy of others in major global academic competitions, urging them to remain good ambassadors of the country.

He urged parents and caregivers to continue inculcating the virtues of hard work, excellence and integrity in their children and wards for an assured future and betterment of their communities and the nation.

Co-author of the book, Abubakar Mohammed Sani, revealed that it teaches how a son of nobody could become somebody through focus and determination which he said Buratai consistently demonstrated since childhood.

The children assembled from various government and private schools in FCT held guests spellbound with their excellent reading prowess and poetic presentations.